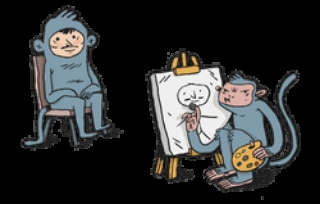 Art: Whether she's tearing a live chicken in half with her bare hands or using her nipples as a 3D printer, Bjork's visual experimentation has always been as wild as that of her music. So it was kind of inevitable that if any pop star was going to be the first to play around with virtual reality technology in a big way, it'd be her. The Bjork Digital exhibition - running at Somerset House until October 23rd as part of an ongoing world tour - has six rooms of video art that you're herded through in a strictly scheduled hour-ish timeslot. It opens with a more traditional installation piece: a pair of films to accompany Black Lake, projected on opposite walls of the room as a bit of a distraction from what is, frankly, the best song showcased here. From there it's on to four VR rooms, which work to varying degrees of success. Stonemilker exploits the 360 degree capabilities to the max, and it's hard not to imagine all the people in the room with you whizzing round on their rotating stools trying to catch Bjork as she runs around you. But for my money, the final piece Notget is the highlight, as it's the only one to really use the vertical axis to staggering effect. After that, you can chill out in a cinema room that's just showing all of Bjork's videos on a big screen, which you can probably stay in till they close up the building. Bargain! Sure, VR is no more than a visual gimmick at this stage, but that's how all these things start.

Books: A status report for those of you who might be wondering: I'm currently just over halfway through Alan Moore's new novel Jerusalem. With most other books, this would hardly count as news. Jerusalem, however, comes at the tail end of almost a decade of hype, down to its sheer scale - 1200 pages, something in the region of three-quarter of a million words, a single story that's literally longer than the Bible. If you eschew the sheer impracticality of the single volume hardback edition in favour of the paperback release - three standard-sized volumes in a slipcase - then it becomes a lot less daunting a proposition. It's a fantasy trilogy: people write those all the time. What they usually do, though, is publish each volume as it's completed over a period of years, instead of labouring over the thing for a decade and then hurling it all into the shops in one go. Still, that's the sort of perversity that endears Moore to, um, people who don't have to work for him. I'll give you a full report when I'm done, but for now the story of the hyperbolic back cover quote from a nine-year-old boy is rather delightful. (Note, in particular, Moore's refusal to talk down to the kid in his reply.)

Music: It's about time you were fobbed off with another Spotify playlist: and as we head into the final quarter of the year, it seems like a good time to highlight some of my favourite tracks of Q3. A couple of caveats to note here, though. The Ruth Theodore track included here - the first single from her just-released Cactacus - is rather lovely, but the not-on-Spotify album has several other tracks that are even better. She can pull them off live, too, as she proved in her sold-out album launch show at the Borderline, the first venue we've seen her at that holds more than 20 people. (Here's my report from our first encounter with her.) Meanwhile, there are a couple of interesting releases from the previous quarter that don't even have as much as a single on Spotify, notably Little King's Greater Belfast (which has been haunting my brain ever since we saw the show in Edinburgh a month ago) and Harp And A Monkey's touching War Stories. To make up for those absences, I've had to fall back on an album that came out yesterday which I haven't even heard yet - hi, Billy - and the soundtrack to that Psychomania movie I was blathering on about a few weeks ago. (I now have the Blu-ray of the latter, by the way, and it's as lovely a restoration as I was hoping for.)

In the meantime, your Simian Substitute Site Of The Month for October 2016 is Save The Monkey, which is related to La Guarimba International Film Festival. This is a festival that runs once a year in Amantea in Southern Italy, and has the aim of "bringing the cinema to the people and the people to the cinema." They're serious about that, too: it's a free festival. In order to pull that off, they need sponsorship, and so the Save The Monkey campaign is to help them raise enough money to run next year's festival on August 7th-11th 2017. (The festival's mascot is a monkey, in case you were wondering.) For a mere five euro you can get your name in the programme: donate more and you can get t-shirts, posters, and even a monkey portrait of you.

Why would I be thinking about film festivals at this time of year? Oh, you know damn well why. Coming this month: the 2016 London Film Festival, and all the daily update madness which that entails. (So don't expect that Jerusalem review until all this is over.) Feel free to amuse yourselves in the comments box below until that all kicks off...