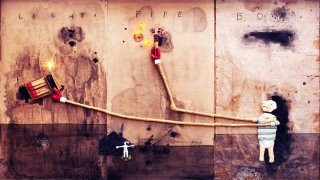 While the cat's away, the mice will play. Well, The Belated Birthday Girl isn't exactly away today, just working during the normal LFF matinee hours. That gives me the chance to watch a film whose subject matter she simply wouldn't touch with a ten foot pole, even though I wasn't that desperate to see it really. Oh, sure, I've been a David Lynch fanboy in my time, but haven't dared revisit any of his films in recent years just in case they no longer hold up.

After a few quiet years, Lynch is starting to pop back up in popular culture again. Another documentary in the LFF marks the 30th anniversary of the release of Blue Velvet. Meanwhile, in the present day, he's currently locked away with a shitload of lightning and a very tiny bottle, attempting to make the upcoming third season of Twin Peaks as good as the first and better than the second. And then there's this: a documentary made by some close friends that looks at his early life through the prism of his visual art, stopping right at the point where he starts shooting his debut feature Eraserhead.

It's a very relaxed film. We watch Lynch pottering around his studio, applying paint to a canvas with his hands or constructing mixed media doodads to nail onto it later. Occasionally, we pause for a minute or two to watch him grab a crafty fag while he works out what to do next. Over these images, Lynch talks us through his childhood and college years, and when he decided he wanted to be an artist. "I had this idea of The Art Life: you drink coffee, smoke cigarettes and paint. And that's it."

Aside from archive footage, the only other person to appear on screen with Lynch is his youngest daughter Lula, born in 2012. It pulls you up short when director Jon Nguyen reveals one of the reasons why this documentary exists: given that Lula's dad is now 70 years old, it might be an idea having some sort of document around describing what he was like. And The Art Life depicts Lynch just the way you'd expect, given the amount of input he's had into it: a mixture of homespun charm, funny anecdotes, and the odd bit of darkness when you least expect it. (There's one story he leaves tantalisingly unfinished that'll bother you for ages afterwards.)

The Art Life isn't a film that will convert unbelievers to the cult of Lynch. It's still one that's worth catching if you've ever wondered what it would be like to watch him wandering around his house, and wait for him to drop his guard. He won't, though. 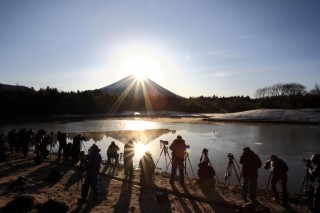 We're only a couple of days into this year's festival, but we already seem to be hitting the Experimenta section a lot harder than usual. First there was Dawson City: Frozen Time, and now there's Ascent, the closest thing that the LFF's Wonky Shit strand gets to a gala presentation. There are definite similarities between the two: both Dawson City and Ascent are constructed entirely out of found images, and use them to tell a compelling story to a degree you wouldn't normally expect in experimental cinema.

In the case of Fiona Tan's film, all of those found images are of a single landmark: Mount Fuji, depicted in four and a half thousand still photos, spanning the whole history of photography, edited into an eighty minute film. As for the story, it's narrated in voiceover by Tan herself, reminiscing about her late Japanese friend Hiroshi, from whom she's just received a mysterious box full of pictures and notes on Fuji. As we look at the pictures, both the narrator and Hiroshi talk about the role of Fuji as a Japanese icon, the practicalities of climbing it, and the difference between photographs and moving pictures.

Ascent is surprisingly accessible for an Experimenta film - the ravishing images (uploaded to Tan's website by members of the public over the space of a year) and the careful pacing of the story make it an easy watch. The narration is a little devoid of humour, but it's balanced out by some wit in the image juxtapositions, such as the sequence near the end where Tan apparently gives up and includes a montage of things that are just roughly the same shape as Fuji.

It's an incredibly smart film that doesn't wear its intelligence on its sleeve, held together with some ingenious sound design (as Tam points out, without a carefully planned soundtrack there's no real way to decide when to cut from one image to the next). Which is why I felt slightly disappointed that it didn't quite grab me as a film: I was appreciating all the elements from a distance - like you would a mountain, perhaps - but never got completely drawn into it. Still, your mileage may vary: that's why they call it experimental cinema, after all, and it's certainly a bold and watchable experiment. 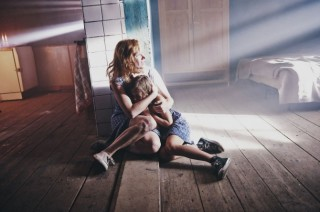 This film, I admit, was chosen purely to fill a slot - we were at Curzon Soho for Ascent, and didn't really have a firm preference for any of the films screening later in the day, so we just went for the next thing at the same cinema. After all, it's not like we're particular fans of Czech horror movies. Though on this evidence, maybe we should be.

Inspired by an old Czech legend, The Noonday Witch is about a mother and daughter - Eliska (Anna Geislerová) and Anetka (Karolina Lipowská) - who move to the village where Eliska's husband Tomas grew up. The pair try to settle into their new home, but quickly discover that the village has some odd little secrets - like the old woman who wanders the fields at noon, scaring the hell out of the children. Mind you, Eliska can't really complain about secrets: after all, she's being rather vague to Anetka about why Tomas isn't there with them.

Jiri Sádek's made an odd thing here: a horror film that largely takes place not just in broad daylight, but in the blazing sunshine of a heatwave. (Having said that, most of its biggest jumps are inevitably reserved for nighttime.) It's a challenge to build a creepy atmosphere in such a brightly-lit environment, and Sádek does this by adding miscellaneous off-kilter tiny details without plonking them directly in the foreground: the outdoor party where every item of food and drink is covered in wasps, or the symphony of creaking noises the house makes at all hours of the day.

Combined with the slow buildup of the story and the increasingly unhinged performances of the two female leads, it all bubbles along in a satisfying fashion for most of its length, but sadly blows it at the climax by resolving its story with a flimsy bit of planet-sized handwaving. Still, apart from that ending, it's a nicely distinctive slice of psychological horror.