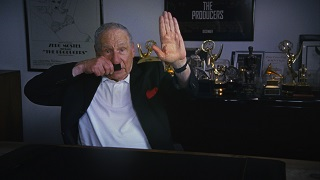 Remember where this festival started for me? I flew in from Dubai early on the morning of Friday 7th, and was watching a film at the ICA by 3.30pm on the same day. I knew I needed to get as much sleep as I could on the plane, so I put on the noise cancelling headphones and picked an album to have on in the background on a continuous loop for several hours. The album I chose was Songs From The Sarah Silverman Program, and now The Belated Birthday Girl is concerned that I might have caused myself long-term psychological damage. Dunno about that, but it did strike me that when you smash up 30 episodes of Silverman's TV show into 80 minutes of musical numbers and dialogue soundbites, her working method becomes ridiculously obvious. If there's a taboo she can see, she'll break it: abortion, AIDS, race, the Holocaust. (Or "the alleged Holocaust" as she refers to it in a stand-up routine.)

It's almost inevitable that Silverman's one of the key interviewees in Ferne Pearlstein's documentary, which examines if and how it's possible to find humour in the Holocaust. Crucially, she has testimony from a number of survivors, notably 92-year-old Renee Firestone, who now gives talks in places like Rwanda where it's obvious that certain lessons have not been learned. We learn how Jews used comedy as a coping mechanism throughout the atrocities, including holding their own cabarets inside the camps. And we hear from a number of Jewish comics from Mel Brooks to Sarah Silverman, discussing how the boundaries of taste have been pushed over the years, with Brooks' The Producers blazing the trail in 1967.

This could easily have been two separate films: the survivors' testimony, and the comics' justification. Pearlstein does an excellent job in getting the two strands to intertwine and comment on each other, notably in a series of scenes where Firestone effectively searches for 'LOLocaust' in YouTube and decides if the clips she finds are funny or not. It's fascinating seeing the range of reactions from the various interviewees - Brooks and a spokesman for the Anti-Defamation League have totally opposing views on both Sacha Baron Cohen and Life Is Beautiful. The common theme seems to be that these are never jokes about the Holocaust itself - they're either ridiculing the people responsible, or celebrating the people who survived. These are jokes about Jews, for Jews, and the problems start when the rest of us try to get involved. So maybe I'll just leave it there and not try to come up with a funny punchline. 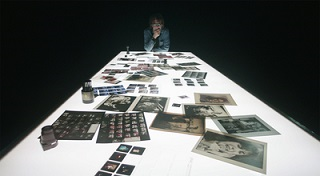 One more documentary, and then that's enough of them for this festival. It wasn't the original plan - we were trying to get to the screening of Tom Ford's Nocturnal Animals, but it appeared to be one of the few LFF films this year that didn't have any late tickets released. Still, after complaining last week that we were neglecting the Sonic programming strand of music films, we finally got to catch one more on the closing day.

Shot! features Mick Rock, the best named music photographer in the world, telling his life story to director Barnaby Clay. Starting at his lowest point in 1996, when three consecutive heart attacks nearly killed him, he goes back to the early days of studying at Cambridge and becoming obsessed with the sort of poets that hippies got obsessed with in the sixties. He saw rock stars as their modern day equivalent, which justified his hanging out with the likes of Syd Barrett: one of his earliest jobs was taking the cover photo for Barrett's The Madcap Laughs, a simple shot of the singer in his bedsit enlivened by painted floorboards and a naked woman. By the mid seventies, Rock was the house photographer for David Bowie, Lou Reed and Iggy Pop. Unfortunately, employers like that don't have any sort of meaningful health plan.

Shot! feels like a TV documentary with pretensions - actually, it was made for Vice, so that's almost certainly what it is. In a festival that's been notable for innovations in documentary technique, this one's unique in having Rock acting in the reconstruction of his own heart attack. As he lies on a gurney in a darkened studio, he's simultaneously poring over a huge lightbox, looking at his most famous images and telling the extraordinary stories of the people in them. The pictures are iconic, and Rock is an excellent raconteur (with a fascinating side order of mysticism), so there are worse ways to spend a Sunday afternoon. But there are some frustrating gaps in his timeline, and a huge gaping hole when it comes to the years after Rock's heart attack - he got better, and still seems to be working today, but that's all we're told. You do suspect that the heavy focus on the Bowie years is a bit of opportunism on someone's part, given the events of this year. I'm not saying Rock shouldn't be sharing these stories now, I'm just curious as to why he wasn't sharing them in a film twenty years ago where this one finishes. 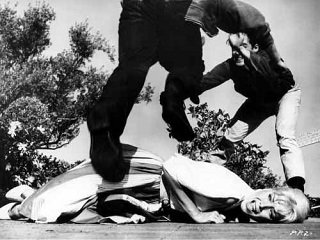 You should know by now that we don't really do Closing Galas, not at thirty-eight quid a ticket with no guarantee of free chocolate. Some years, it feels like we're deliberately trying to finish off our personal LFF with the most anti-Gala screening we can find. This archive presentation might just count as one of those.

A 1959 film by writer/director Leslie Stevens, Private Property stars Corey Allen and a young Warren Oates as two ne'er-do-wells, Duke and Boots, on the loose in California. Within a few minutes of the start, they've already bullied a gas station owner into giving them free bottles of pop, and threatened a motorist with a knife, so we know they're wrong 'uns. When they encounter an attractive-looking woman in a car, they follow her to her fancy house, with Duke promising Boots that he can get her for him. The house next door to the one where Ann (Kate Manx) lives is abandoned, so they break into it and start spying on her. Inevitably, things move on beyond mere voyeurism - and as Ann's marriage is a loveless one, initially she isn't too bothered about the attention.

Problematic attitudes aside... actually, no, to hell with that, it's the problematic attitudes that make it interesting. The closest comparison point I have to this film is the series of black and white melodramas that Russ Meyer was making a few years later, climaxing in the high point of world cinema that is Faster, Pussycat! Kill! Kill! Of course, Meyer would have cranked up the sexual tension way beyond the level that Stevens manages here. Still, there's no denying that the air of threat that hangs over most of the film, as Ann goes about her daily life totally oblivious to Duke and Boots' ultimate intentions, makes it an awkward watch nowadays. Still, there's a lot to admire here, from some inventive camerawork (one shot with a whisky glass in the foreground is inspired) to the understated reason why Duke is trying to find a woman for Boots. Put it this way: it took me well over an hour to notice that this is a 1959 film that's been lovingly restored to look like it was shot only last week - I was too busy concentrating on the, um, other stuff.

And with the added bonus of discovering on the way out that LFF regular Neil Pearson was in the audience for this film, that's our London Film Festival over for another year. Come back soon for the final roundup by The BBG and me.