You've almost certainly worked out that this is not a picture of one of the LFF cinemas. Not even the Embankment Gardens pop-up that they've opened just for the duration of the festival. No, this is the newly-reconstructed Vox Cinema in Dubai's Mall Of The Emirates, an already-oversized multiplex padded out with additional gimmicky concept screens. There's an IMAX Laser room, a 4DX with moving seats and atmosphere effects, and the unnerving prospect of Theatre by Rhodes, in which Gary Rhodes crams gourmet burgers into your mouth while you're trying to watch the film.

You've also worked out by now that I'm telling you all this because Dubai is where I am today, not in London catching the first full day of the LFF. ('Today' being Thursday, of course. By the time you read this, it'll be Friday, and I'll be back in London attempting to cure my jetlag by attending two movies and a talk by Industrial Light And Magic back to back. But that'll be a story for another day.)

Pressure of work has forced me to miss the opening days of the LFF a couple of times over the years, but I usually try to make sure that there's some coverage for you to read. And that's the case this year, as The Belated Birthday Girl is here to tell you about the first two films she's seen at the 60th LFF. Once again, we seem to be hitting the documentaries quite heavily - have a look... 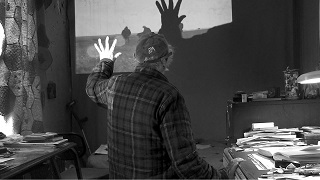 The Belated Birthday Girl - I’m not entirely sure what drew me to this film: it’s one of those things I seem to do sometimes in the festival, to pick documentaries about artists I know little or nothing about (The Cool School in 2007 is one previous example I can remember). Seeing the catalogue of what Robert Frank has done and who he has worked with, I certainly felt I should have known more about him than I did going in.

Director Laura Israel, one of Frank’s long time collaborators, who has edited some of his films, takes us on a semi-chronological journey, with frequent detours and diversions, through his life and work. The effect is a kind of collage, combining crisp black and white footage with other footage in vivid colour, with clips from his own films, and other archive footage. Some of the clips feature some very significant figures and recognisable events but others are of smaller, more personal moments with family and friends & neighbours. We hear about Frank’s upbringing in Switzerland, and the influences that led him to photography, about the start of his career and family once he moved to the States, and how he moved into working on his own projects, both photography and film. Frank’s films are largely personal, often inhabited by family and friends, with Frank himself frequently appearing in front of the camera as well as behind. The early ones from the Beat era, working with such icons as Kerouac and Ginsberg, encapsulate the time, and these were the ones I would be most keen to see. But it was his striking photographs, mostly of people across the USA and elsewhere, which really grabbed my attention.

As well as showing many of Frank’s photographs and clips from his films, Don’t Blink also gives an insight into how he works, whether by interviews with Frank and those who have worked with him, or by actually showing him at work, both behind the camera and in the dark room.

In an interesting Q&A after the screening, Israel and her producer and editor revealed how Frank kept them from being able to be too fixed on any pre-conceived narrative or plan, keeping them on their toes and keeping it fresh. Although I am sure the film will be of even greater interest to fans of Frank’s work, Don’t Blink is a fascinating portrait of an artist and his process. The Belated Birthday Girl - The 13th of the title refers to the 13th Amendment of the US constitution – the one abolishing slavery. Specifically, the focus of the film is the “loophole” left in, allowing for an exception “as a punishment for crime whereof the party shall have been duly convicted”. Because this film is drawing a direct line from the abolition of slavery after the civil war to the mass incarceration, hugely disproportionately of black Americans, in today’s USA. 13th is a highly intelligent film, but also one quite rightly brimming with an anger at the historical and contemporary treatment and portrayal of black people in America.

The amount of information in this film is vast, and the arguments for how the criminalisation and demonisation of black people in the US serves and has always served economic interests are convincing. But as well as facts and figures and academic arguments, it is a film which highlights the devastating personal impact of the American criminal justice explosion of the last 40 or so years on real individuals, and shows the reasons behind and the importance of the current Black Lives Matter movement. This film deserves to be widely seen, and as it will be available on Netflix by the time you are reading this, there is every reason to hope it will be.

I was a little disappointed that director Ava DuVernay was unable to attend the screening - the European premiere of the film - as she is currently in New Zealand for her next film, but she did send a special video introduction for us. It’s a shame she wasn’t there, as I think a post film Q&A discussion about points made in the film and possible remedies could have been very interesting.

I’m not sure I had deliberately set out to have a documentary day for my first day of this year’s LFF, but that’s how it worked out. But while Don’t Blink is an interesting and entertaining film, 13th is a devastating and important one.