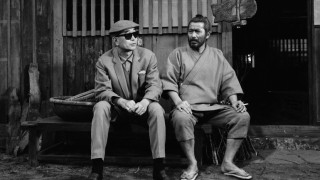 Yeah, sorry about that, only two films under review today. Obviously, it would take some sort of cataclysmic world event to knock this site off its three-films-a-day average. Soil&"Pimp"Sessions playing at Ronnie Scott's tonight? Yeah, that would do it. The lure of Japanese Death Jazz performed live at London's most iconic jazz venue proved so strong, we sold two tickets we'd already bought for Danish film The Day Will Come to the highest* bidder, just to clear our schedule for this gig. (I don't intend to review it alongside the LFF films, but if you need a review just imagine the phrase FUCKING AWESOME repeated in capitals 250 times and that'll probably do it.)

By coincidence, our first film of the day got us into the Japanese mindset. Mifune is a film biography of legendary Japanese actor Toshiro Mifune, directed by Steven Okazaki and narrated by Keanu Reeves. It tells the familiar story of his humble beginnings as a new hire at Toho studios, his rise to fame under the guidance of director Akira Kurosawa, and his slow decline after the two men fell out.

The film's only 80 minutes long, and feels like the sort of documentary you'd find as a DVD extra. And to be honest, the level of insight isn't that much above what you'd expect of a bonus feature. It feels like a list of events copied from Stuart Galbraith's excellent biography The Emperor And The Wolf (Galbraith is credited as co-screenwriter here), padded out with a few talking heads telling us things we already know. Aside from a brief section on the Samurai trilogy, the bulk of the film focusses on the Kurosawa collaboration years, which makes for a nifty selection of film clips but a somewhat predictable narrative thread.

There's one thing that makes Mifune salvageable as a film: in its opening sequence, it goes into the deep history of the chanbara swordplay movie, with copious clips from rare silent movies of the genre, something you don't see every day. Once you get past that, it becomes a lot less interesting. There's a space out there for a Mifune film biography as comprehensive as Adam Low's 2001 portrait of Kurosawa. This isn't it. 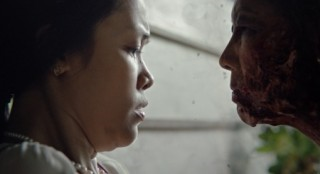 It's become a selling point for the LFF in recent years: "come and see a movie from a country you've never seen a movie from before". Problem is, when you've done 28 of these things on tne trot, that's an objective which becomes harder and harder to achieve. Which makes it all the more impressive that today, I saw my first ever film from the country of Laos, a territory I shamefully primarily associate with Hank Hill's neighbour from King Of The Hill.

Dearest Sister tells the story of Nok (Amphaiphun Phommapunya), a young girl from a poor family. She's sent to look after her richer, older sister Ana (Vilouna Phetmany), who married an Estonian man shortly before starting to go blind. (It's not clear if those two facts are related.) The plan is for Nok to earn enough from this arrangement to help finance her folks back home: however, she finds that she can't resist keeping her wages for herself. There's also the added complication that Ana has started seeing demons with her wonky eyes in times of stress. What she doesn't know - but Nok does - is that during these attacks, Ana becomes a reliable source of winning lottery numbers.

That may seem like an odd mixture of tones to maintain across a single film. But it's surprising how emotionally flat Mattie Do's movie is - and in a good way. After a couple of decades of Asian horror films that try to turn up the suspense slowly but wreck it all with the requirement for one big jump scare every ten minutes, here's one that does away with the jump scares. It has to - all of the most frightening moments are seen through Ana's increasingly defective eyes, so we have to peer through a layer of black smoke and the Adobe After Effects Greasy Fluff Plug-In (so beloved by young British animators) to work out what we're looking at.

What you're left with is a sub-sonic drone of underlying dread, which gradually increases in volume as the film progresses. Do does everything she can to disorient the viewer: keeping you guessing throughout as to where Ana's husband fits into all of this, which one is the 'bad' sister, or even if they're sisters at all. The result is a quietly effective horror movie unlike any other out there at the moment, and it remains to be seen if this is some sort of national trend for Laos or just a one-off. I hope it's the former. Besides, Mattie Do deserves extra credit for listing the names of all her IndieGoGo backers in the end titles in both English and Lao, specifically so they can have exotic Asian tattoos made from the latter.