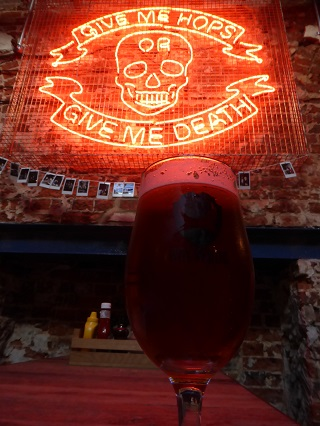 As is usually the case with these bar visits, The Belated Birthday Girl and I didn't want to visit a city just to see the bar - we wanted to have some sort of additional hook to justify us travelling there in the first place. And we found a terrific reason to go there in mid-October: a live gig by The Divine Comedy at Open, the community arts centre occupying a glorious building that was originally the regional HQ for Barclays. (In a splendidly witty touch, the old bank vaults are available for hire as a secure storage facility called Closed.) I've been to several Divine Comedy shows over the years, and they've all been very different, depending on whom Neil Hannon chooses to collaborate with on that particular day. After a couple of years where he's been effectively performing solo, he's now got a six-piece band in tow who can give his more melodramatic climaxes the power they deserve. Hannon was obviously having a lot of fun on stage - occasionally too much fun, particularly when he was wandering around the audience during Our Mutual Friend, a hot contender for The Saddest Song In The Damn World. But the costume changes, the between-song banter and the barrage of hits at the climax ensured we were all having as much fun as he was. (Over twelve hours later, on the Sunday afternoon, the fun seemed to be continuing: The BBG and I passed the band's gargantuan tour bus, still parked outside Open, as a roadie got off it and discreetly tried to dispose of a bin bag full of empty bottles.)

So, with a date to aim for, we built a whole weekend around that gig, travelling up by train on the Saturday morning and - thanks to a ironic bit of engineering work - getting the National Express back on Sunday night. Our base for the Saturday night would be the Hotel Belmonte, which we discovered just that little bit too late was in the middle of a huge stretch of nightclubs on Prince of Wales Road, and actually located on top of a nightclub itself. Surprisingly, that turned out to be no problem whatsoever. Rolling in at 1am on Sunday morning, the oldest and most warmly dressed people in the building, our top floor room was completely insulated from the racket below, and we got a perfectly acceptable night's sleep there. The dirt cheap room rate doesn't include breakfast, but there are plenty of excellent places nearby for that sort of thing, with No. 33 probably best for your traditional dishes while The Bicycle Shop has more exotic brunch-type combinations. (And to get one more of our meals out of the way, we also had a fine locally sourced dinner at Roots.)

Norwich is a rather lovely city to explore - the castle and cathedral are both worth visiting - but you know what we're really here for. And it's at this point that I need to point out a small complication regarding our trip to BrewDog Norwich. The thing is, we booked all this a good couple of months in advance, only for BrewDog to announce nearer the date that we'd be arriving in the middle of CollabFest 2016. You may be aware of it: once a year, each BrewDog bar gets together with a local brewery to produce a unique beer, and all those beers go on sale on the same day. This year, CollabFest was going to last three days - two of which would be while we were in Norwich - and there would be 27 new beers to sample over that period. I think you can see our problem.

I actually ended up documenting CollabFest in real time on my Moblog site, and you can see from there how it went. Briefly, we knocked back the first eight of the beers on the Friday night while we were still in London. On our arrival into Norwich on Saturday we sampled the next four in an afternoon session, and then after the Divine Comedy gig we came back for eight more before bed. (These are all 1/3 pint measures shared between the two of us, by the way, we're not monsters.) That left seven more beers to do on Sunday lunchtime: unfortunately, this is the point where we discovered that the Norwich bar wouldn't have those beers available that day, as they only have a limited number of taps available, meaning that they had to schedule half the 27 beers for Friday, and the rest for Saturday and Sunday. (We caught up with four more back at the Shepherds Bush bar on the following Monday, as they were finishing off the kegs from that weekend: the remaining three will, I suspect, have to remain out of reach for ever.)

Despite all this beer we had to get through (yes, had to), we also took the time to make some observations about the Norwich bar itself. It's a decent sized place, with a traditional bar area in the front and a light, atrium-style back room that's much bigger. (For part of our late-night session, I was convinced there was a third room beyond that, but eventually realised it was a couple of mirrors instead.) There doesn't seem to be much difficulty in filling the place, especially on a Saturday - when we turned up at Sunday lunchtime it was initially a bit quiet, but got a bit livelier over the course of a single pint. Add in incredibly helpful staff and an eclectic music policy (a big shoutout to whoever the Fischer-Z fan on the team is), and it's definitely one of the better bars we've visited.

How helpful are the staff? Well, let me tell you about that Sunday lunchtime visit. Our plan was to have lunch there and make our way through the last seven beers on the CollabFest list. Once we'd found out that they wouldn't be on that day - and, along the way, learned about the logistical nightmare when you have to change over 14 of your taps to a new beer on two consecutive nights - we decided to get a couple of standard pints, just drink those and then get lunch somewhere else. So we pulled out the laptop and started looking for possible lunch alternatives. Within a few minutes, two members of the bar staff came over, looked over our shoulders at the laptop and gave us suggestions of other craft beer bars to visit. It's thanks to them that we ended up at the Plasterer's Arms, an old-fashioned pub with a magnificent philosophy regarding serving the best of both craft and real ale, and an excellent range of pizzas as a bonus, courtesy of Voodoo Daddy.

Great beers and a nice building are all well and good, but staff who'll tell you somewhere else to go if they can't provide what you're looking for? That counts as going the extra mile in my book. Top work.