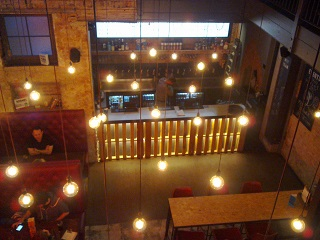 The train journey to Southampton and back is reasonably uneventful, despite some track works that double the London-Woking section of the ride to close on an hour. We hit town at 11am on Sunday morning, a good hour before opening time. What to do? Well, the little bit of research we'd done suggested we should make for the city's Cultural Quarter, which has a few museums and civic amenities squished into a relatively small space.

Of the two places we visit, SeaCity Museum is definitely the best: a modern maritime museum located inside a glorious former Magistrates' Court building (check out the ground floor toilets, which used to be the cells). There are three decent-sized exhibitions on the go simultaneously. The highlight is undoubtedly Southampton's Titanic Story, as the doomed ocean liner was largely staffed by Southampton residents - the personal angle gives it a much greater impact than other presentations I've seen on the subject. It overlaps awkwardly with the current temporary exhibit, Port Out Southampton Home (running till June 4th 2017), whose history of ocean liners treats the Titanic as a low point in the middle of what's otherwise a delightful tale of ridiculous luxury on the high seas. (If you can, find the area where kids have been asked to design their own dining menus for a cruise, as the results are a hoot.) The other permanent display is Gateway To The World, a more interactive look at the numerous nationalities that have passed through the port over the centuries, and a welcome reminder that immigration is effectively what builds cities like Southampton.

By comparison, the other gallery we visit - British Art Show 8, running at the City Art Gallery until January 15th - is awkwardly laid out, and a little too heavily weighted towards the no-fun side of conceptual art. The closest thing to an exception to this is Cally Spooner's LED display of huffy YouTube comments about people who've been found cheating in videos - Beyonce miming, Lance Armstrong pumping himself full of drugs, that sort of thing. This display includes the teasing announcement that selections of these comments will be sung by a soprano every Saturday at 3pm. Unfortunately, it's a Sunday, so we cut our losses and head off for a quick snack instead. (I'd like to be able to say that the Momento cafe bar is staffed by waiters who forget your order every five minutes just like the film, but that would be massively unfair: partly because it's not true, and partly because that's not what the film's called.)

Temporarily sustained by coffee and cannoli, we head up the road to BrewDog Southampton. It could be considered a little off the beaten track, particularly if you're making your way there from the city centre, but it appears to be in a part of town with a few other equally successful bars running.  Once you find the street, you shouldn't have too much difficulty finding the place - in contrast to the restrained exteriors of several of the more recent bars, this one literally has BREWDOG painted across the front in blue letters several feet high. Inside, it's working to the usual design template, but with one rather terrific feature: it's a small bar, roughly the size of the Aberdeen flagship, but an upstairs balcony area gives you plenty more seating space without turning the place into a barn.

It's fairly quiet on a Sunday afternoon, or at least on the Sunday afternoon we visit. We manage to get a booth for the couple of hours that we're there, which means that it takes me a while to notice that we're the only people of the dozen or so there who aren't playing board games (the classic Sunday afternoon hipster bar activity). We decide to stick with the core competencies that we know the bar can deliver - a couple of decent beers, and a pizza each. For those of you who've been following the ups and downs of BrewDog catering over the years, currently their kitchens are following one of two menus, specialising in either burgers or pizzas depending on what that particular bar can sustain. The pizzas are very welcome here in Southampton, as back home in London all of the bars are running the burger menu. (At least, that was the case in mid-November. See the upcoming BrewDogging #43 for an update.)

It all makes for a delightfully chilled Sunday afternoon: but there's one more bit of beer-related fun to be had before we get the train back home. The Cultural Quarter is located at the top end of what they call the QE2 Mile, a stretch of main road that leads you to the ferry terminals at the other end. It would seem wrong to visit Southampton and not go anywhere near the water, so we decide to use the QE2 Mile as a way to walk off the beer we've just drunk, taking in the sights of the city along the way. When we get to the waterside, it's quite frankly too dark to see any decent boat-related activity apart from one of the ferries loading up cars. But, thanks to one of The BBG's contacts who lives here, we were also aware that close by we'd find The Dancing Man, Southampton's only brewhouse. Located inside another ridiculously beautiful old building (in this case, a former medieval warehouse), it has a nicely eclectic mixture of cask and keg beers on offer, several of which are brewed on the premises. In fact, it takes us a while to realise that we already know their work: Dancing Man brewed a beer with the staff of - yes! - BrewDog Southampton as part of Collabfest 2016, and we'd drunk some of it just a few weeks earlier. Small world, isn't it?