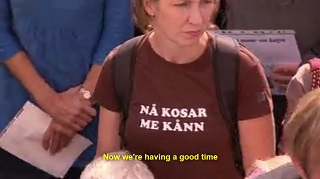 Taking the programmes in the order in which we reviewed them:

1. Bergensbanen minutt for minutt (Train Ride Bergen to Oslo)
"Norwegian documentary. Experience total train trip from Bergen to Oslo from ringside seat, on the day a hundred years after the pitch-black opened. Not EiT minute we lose out, the program lasts as long as a total train journey takes, that is seven hours and sixteen minutes exactly this a time. You've never seen Bergensbanen, unless you're locomotive accountants. Four cameras are on the train, and in addition, quartz EiT black hol in terms of ein tunnel, exploited to take up archive catarrh from Bergen Line. Undervegs you experience 'Bergen train raided in the night,' radio interview with Rallaren Martin Gjerde, who self was with and built the railway for more than a century ago, and much anna from this famed stretch of railway over high mountains."

2. Telemarkskanalen minutt for minutt (The Telemark Canal)
"Live. We follow MS Victoria on the trip from Skien to Dalen."

3. Nasjonal vedkveld (National Firewood Night)
"Me fire in the hearth and held life in the fire during the whole night. In 12 hours makes the wood you warm on NRK2. You meet Lars Mytting, Mads Gilbert, toralv maurstad and several dedicated vedafolk. Be informed and feel the heat! Me Satisfying fire the minute poured until morgonen."

4. Hurtigruten minutt for minutt (Northern Passage)
"Ever since 1893 have passengers traveled along the Norwegian coast with Hurtigruten. The tour is called 'world's most beautiful voyage'. Now everyone can travel with - simultaneously - in the world's longest TV program! Spectacular fjords, midnight sun and genuine Norwegian nature provides the framework around the five and a half days long trip from Bergen to Kirkenes. We send the whole trip, direct, minute by minute in 134 hours! Do you remember last year's hit TV show? How has it been with the crew of MV Nordnorge afterwards? And what happened to the people along the lane that made the trip an unforgettable experience, minute by minute?"

And though we didn't have time to review it, this one's also available on Netflix, so...

5a. Nasjonal strikkekveld (National Knitting Evening)
"Live entertainement program from Trikotasjemuseet in Salhus where knitting is only parts subject. Four hours with inspiration, tradition and new ideas. A Harley Davidson will get knit dress, ein selbu mitten becomes and you get to learn knitting techniques. You meet knit personal verdicts from a total country. Program Leader Rebecca Nedregotten Beach hoping to get stopped hola in favorite paw duck their. When it approached midnight ladar me up to verdsrekord experiment 'From sheep to sweater.'"

5b. Nasjonal strikkenatt (National Knitting Night)
"A sheep, a cliff and seven spin all abilities / knit all abilities on Trikotasjemuseet in Salhus. 'From sheep to sweater' is the ambitious record attempt. Minute by minute shall me see sheep mistaking wool, wool become yarn and yarn become sweater. Can me there in under 4 hours, 51 minutes and 14 second train?"