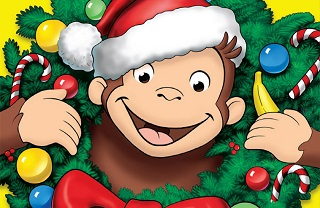 In the meantime, your Simian Substitute Site Of The Month for December 2016 is the video for Our Christmas Monkey. Not much to say here, really: it's a song from the animated movie Curious George: A Very Monkey Christmas, which exactly the sort of film you think it is. Actually, if you're curious yourself, the whole film is available to watch elsewhere on YouTube, although the image is really small to stop the copyright police from blocking it, and whoever recorded it left the audio description track running. Hence the comment "why is there a fucking narator can i enjoy curious george without a fucking lady talking about every second of the movie? fuck this ill just go to pbs kids." Sigh. Remember when this used to be the family-friendly portion of the site?

So, yes, it's nearly Christmas! Expect some traditional end-of-year content to appear in the month ahead, along with some other stuff. No clues. (Although you had one back there near the top of the page.) As ever, feel free to leave your Christmas wishes and so on in the comments below.

I have wanted to Hygge Sara Lund (Sofie Grabol) and her sweater, long before November.