MOSTLYFILM: Once In Every Generation 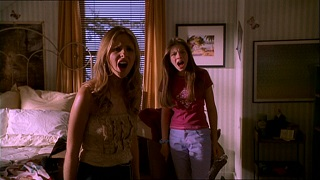 I won't say too much about this one, because it's a group affair. In case you weren't aware, the first ever episode of Buffy The Vampire Slayer was broadcast twenty years ago last month, on March 10th 1997. You may remember that I marked the show's ten year anniversary with a review of the first season. Ten years after that, I've got involved in something bigger.

Over on MostlyFilm, a bunch of us - CaulorLime, TheTramp, Jim Eaton-Terry, MrMoth, me, Sarah Slade and The Belated Birthday Girl - have grabbed one season apiece (apart from Jim who's grabbed two because he's greedy, and The BBG who... well, you'll see) and reviewed the hell out of it. MrMoth has glued it all together seamlessly into a gigantic celebration of all things Buffy that we're calling Once In Every Generation. It'll take you ages to read, and it damn near broke some of the people involved in its creation. But it's definitely worth putting some time aside for it.

You theoretically shouldn't really need Red Button Bonus Content, given all the Actual Content on offer here. But I've quickly hurled a video playlist together with the unwitting assistance of YouTube user BuffyverseTrailers, who's created a fake cinema-style trailer for each of the seven seasons of the show, allowing you to get a flavour of the whole run in about 20 minutes. And the playlist is topped off with an official trailer for the Buffy Season Eight motion comic, which ties in with the subject of The BBG's segment.

Continue reading "MOSTLYFILM: Once In Every Generation" »

MOSTLYFILM: It's Just A Show 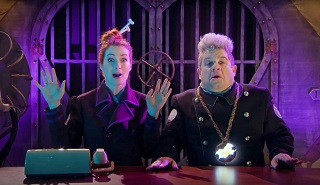 Mystery Science Theater 3000 is back, and on the whole I think I'm happy about that. I last wrote about the show here in 2008, when a cheap DVD of the movie spin-off was finally released, almost a decade after it had been taken off the air. And now, almost a decade after that, series creator Joel Hodgson has assembled a new cast and hurled fourteen new episodes of the show onto Netflix.

Over on MostlyFilm, I've written a piece entitled It's Just A Show, looking back at the history of MST3K and forward to its new incarnation. Meanwhile, over here in the Red Button Bonus Content, I've got the usual playlist of trailers and whatnot that you might expect. But there's a wee problem with that... 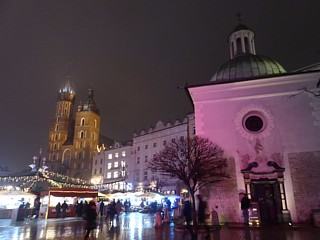 I like the idea of this becoming an Easter Sunday tradition: finally getting around to telling you what we did last Christmas. It worked well enough when I wrote about our Christmas 2008 Prague visit in Easter 2009, so let's try it with another Eastern European city for Easter Sunday 2017.

I've written elsewhere about most of the places we visited in Christmas 2016 - kicking off in Berlin, followed by two separate visits to Warsaw, and with very quick stopoffs in Cologne and Brussels on the way home. But here, finally, is the missing bit in the middle: the few days of proper Christmas that we spent in Krakow in between our two stays in Warsaw.

No BrewDog bars this time, I'm afraid. Quite a few other bars, though. 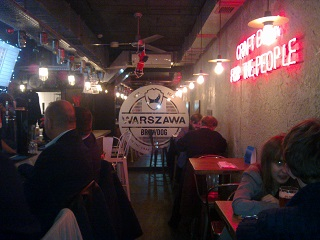 This is how Christmas holidays get planned at Château Belated-Monkey. During 2016, BrewDog opened bars in a number of international locations: two of them were Berlin and Warsaw. We noticed that both cities were joined by a simple rail connection. "Let's go there, then," we said.

It actually turned out to be slightly more complicated than we first thought. The usual start to our planning is to buy some guidebooks for the places we're about to visit, because we're old-fashioned like that. But when I got to Waterstones, I discovered something unexpected: you can't buy a travel guide to Warsaw, because everyone's visiting Krakow instead. As we started talking about the trip to friends, we kept hearing the same thing over and over again - you should go to Krakow, nobody really does Warsaw any more, even if it does have one of those bars you like.

In the end, we compromised: after a few days in Berlin (previously discussed), we spent just over a week in Poland, celebrating the Christmas period itself in Krakow, and a couple of days in Warsaw at either end. I'll get around to telling you about Krakow at a later date. Here, you're getting a report on two visits to Warsaw, including the inevitable bit about one of those bars we like - and an awful lot more besides, no matter what anyone else says. 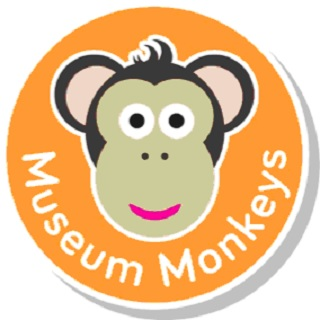 Art: There's a bit of a cold war going on at the Royal Academy at the moment, with rival exhibitions from America and Russia battling it out for your attention in the same building. I can't really say much about America After The Fall: Painting In The 1930s because I haven't seen it, although people I know who have seem to have enjoyed it. But the much larger Revolution: Russian Art 1917-1932 (showing here till April 17th) is a monumental collection of work. The dates in the title are a clue as to why: the exhibition spans from the immediate aftermath of the Revolution (and Lenin's ambitious use of multiple artforms for the spreading of Bolshevik propaganda) to the point where Stalin had effectively abolished the avant-garde, leaving only Socialist Realism in its place. The narrative line of those fifteen years is brilliantly laid out, and results in a collection of art where everything has a subtext, whether it's pro-Bolshevik boosterism or anti-Stalinist subversion. It's a heady mix of painting, posters, photography, film, and a splendid room dedicated to one of Vladimir Tatlin's worker's flying bicycles, which apart from anything else makes you marvel at the way the words 'worker's', 'flying' and 'bicycles' bounce off each other.

Movies: When you've been going to the pictures regularly in London for over thirty years, it gets harder and harder to say 'hey, I went to a cinema this month that I've never been to before.' But this month, we managed it. Olympic Studios in Barnes have been showing films since 2013: before then, they were the Olympic recording studios, which was probably the starting point for at least one record in your collection. (The advert for the cinema itself shows the Rolling Stones recording Sympathy For The Devil there.) Now it's a two-screen cinema which acknowledges its roots in the quality of its sound - it's the only London cinema with Dolby Atmos, and even something as simple as that Volkswagen advert with the Dead Prez soundtrack ends up having bass so solid you feel you can hold it in your hands. The programming policy is mainstream, but with a couple of quirks: the specific reason for our visit, for example, was that it was the only cinema in London that was still showing Loving by the middle of March. As a bonus, the attached restaurant is rather terrific as well. Olympic's only a couple of bus rides away from Château Belated-Monkey - and thanks to The Mayor Sadiq Khan, we only need to pay for one of those - so I suspect we'll be back in the future.

Theatre: The Belated Birthday Girl always insists that she doesn't enjoy theatre as much as, say, film: but there are two main exceptions to that rule, as she will go out of her way to see anything directed by either Robert Lepage or Simon McBurney. This may be because both of them have a detail-intensive, multi-media, almost filmic approach to making theatre: and McBurney's latest project at the Royal Court, The Kid Stays In The Picture, takes the parallel one stage further by being about the movie business itself. More specifically, it's an adaptation of the autobiography of movie producer Robert Evans - if you think the title sounds familiar, it's probably because they made a film of it fifteen years ago. The producer of The Godfather, Chinatown and Rosemary's Baby has a lot of stories in him, and they're well told here. But like the 2002 documentary, this is really just a talking book with added pictures: what makes it work as theatre is the extraordinary array of images McBurney and co-adapter/co-director James Yeatman conjure up on stage, using a battery of video effects. You could argue that it's less emotionally driven than some of McBurney's other work, to the extent that even the impact of Sharon Tate's murder is dampened by the technique used to tell the story. But that technique is dazzling. It's only got one more week to run, closing on April 8th, so hurry hurry hurry.