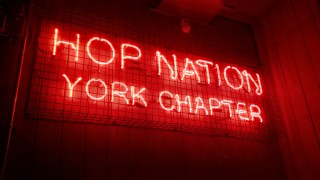 We arrive in York on Easter Sunday afternoon, having spent the preceding two days in Leeds, checking out the relatively new North Street bar and a few other things. With the two cities being a mere 40 minutes apart by train, it means we can cross off the last two UK bars from our list. (At the time of writing, some three months after the visit, we're still completely up to date in terms of having visited all the UK bars, with a couple of the international ones still tantalisingly out of reach.)

Heading straight to the bar from York station (no point in hanging around, and we need lunch anyway), at first glance the location of BrewDog York looks ideal - a short walk from the station, in a prominent spot on Micklegate, a street headed up by the city gate that's confusingly referred to as Micklegate Bar. It's initially a little hard to get a handle on how large it is, due to some idiosyncrasies in the layout - more on that later. But we find a spare table near the back, and go for the predictable combination of a couple of beers and a couple of pizzas, which work just fine as our lunch.

As we scoff our pizzas and beer, we spend a bit more time checking the place out. During that afternoon session, the main feature we observe from our nook in the rear of the building is the collection of fridges for takeaway beer. As BrewDog have walked back from their original plans to have dedicated off-licence premises like the late lamented BottleDog, their focus these days is on selling a decent range of takeaway beers at the bars. The off-sales area in the York bar is an excellent example of this, with two fridges of BrewDog's own beers and two fridges of guests from the UK, USA and Europe. As our table is right by these fridges, we get to see how popular they are - not just with people who are buying beer for later, but also by people who are fascinated by the range on display. At one point, I swear we watch a family leave their child in a pushchair just looking at the fridges, treating the colours and lights as a babysitting device like they're an episode of In The Night Garden or something.

When we return for a nighttime visit later the same day, we again have to look around for a free table before settling for one in the front window. And it's at that point we discover something odd about the bar - there may not be many people in there, but it's still an effort to find free seating. It eventually hits us that although the bar itself is quite big, with at least three distinct areas in it, the number of actual seats in there is relatively small - in fact, the area in front of the bar is basically just a great open space with virtually no tables or chairs in it. You could be cynical and assume that the furniture was reduced to matchwood in a gigantic fight the night before, but it seems more likely that this is how bars work in York - the majority of people like to stand up with their pint, and the bar's been configured accordingly.

It seems to be an approach that's working well for BrewDog York: there were definitely more people around in the afternoon than the evening, but I suspect that's a result of us visiting on Easter Sunday, and other bars seemed to be hit in a similar way. It's a relatively small selection of taps (just fourteen in total, split between BrewDog and guests in the usual fashion), but the large amount of bottles available in the fridges is adequate compensation for that. I'm happy to consider it one of the good ones.

As for other things you can do in York during a flying 28 hour visit, here's a list:

Yea we did the Castle Museum and York Minster, but ha, unlike you we did the train museum as well.

The great thing about that is that they have an outside viewing platform where you can see a real size mock up of a train station with several platforms, and life size moving trains.