Home Archives/Categories About Me RSS Feed Mailing List Email
Wasn't Really Sure What Was Going On
MOSTLYFILM: Celebrating Soderbergh

MOSTLYFILM: The Secret Life Of Arabia 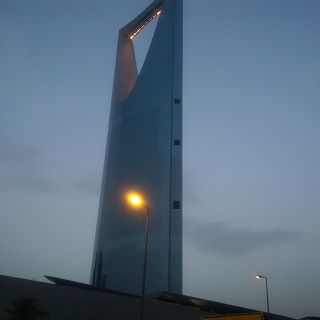 I imagine most of you have made some sort of wallchart to accompany the BrewDogging posts on here. You've listed all of the BrewDog bars currently open across the planet - maybe you've even plotted them out on a big map - and you've been marking them off one by one as we've been visiting them. You're probably eagerly anticipating the day when we can say we've had a drink in every single one.

Well, spoiler alert: that's probably not going to happen. The primary reason for that is the BrewDog bar in São Paulo. Yes, I was in the city back in 2012, two years before the bar opened, but that was for work. Even Brazilians will admit that São Paulo has nothing to offer the casual tourist, which is what we'd be if we were visiting it for BrewDogging purposes. We'd have to expend a lot of effort and money just so we could have a cheeky drink or two.

Saudi Arabia's the same, but without the cheeky drink or two. Riyadh is purely a business city, and there's no reason you'd go there as a tourist: there's no actual method of doing it either, given that they don't offer tourist visas anyway. So when I went there back in May this year - primarily for work, but also to research an amusingly futile Monoglot Movie Club piece for Mostly Film called The Secret Life Of Arabia - I did wonder if writing up my usual set of travel tips would work as backup material. It's quite possible they would be of no use to absolutely anyone else reading this.

Mind you, that's never stopped me before, so here goes.

Obviously the first hurdle you've got to clear is getting a visa, and you'll be relying on other people to help you with that, as you'll need carefully formatted letters of authorisation from both the company you work for back home and the company you'll be working with over there. It's a fairly torturous process, and the first visa agent I approached told me they'd just given up dealing with the Saudi embassy because of all the delays. I eventually ended up using A&M Visas, and they turned the whole thing around in an impressively short time... whereupon the job I was working on got delayed for a few months.

By the time I was ready to fly out, there'd been a new development: the ban on laptops in carry-on luggage on direct flights to and from Saudi. (In case you missed the update, the US has quietly dropped the ban, but it's still carrying on in the UK.) A laptop's a fairly fundamental part of my work toolkit, so I had two options: take a direct flight and run the risk of the laptop getting damaged as it bounced around in the hold, or change planes somewhere that was less fussy about the risks of having laptops in the cabin.

I went for the latter option, flying Lufthansa via Frankfurt. The flight itself was perfectly fine, but there was a complication I hadn't forseen. I tend to be lackadaisical about travel money these days, and just buy some at an airport bureau de change immediately prior to boarding. It was a bit of a shock to roll up to Heathrow Terminal 2 and find that Saudi riyals weren't available at any of the Travelex branches there. That's because all the riyals were in the bureaux at Terminal 3, where the direct flights go from. I ended up having to change my cash at Frankfurt, effectively doubling the conversion fees as I converted pounds to euros and then to riyals. (This wasn't made any easier by Travelex's policy of having every bureau in Frankfurt airport close for lunch between 1pm and 2pm.)

Once you're in Riyadh, you'll probably be reliant on taxis to get around town. That may change in a few years: the city's currently a gigantic building site, with huge holes in the ground as they're in the middle of excavating a new subway system from scratch. It's apparently hit several delays in construction - blame wobbly oil prices, ironically - but nobody seems to have considered how people are going to travel from subway stations to their destination, given that Riyadh is as bad as most other Middle Eastern cities when it comes to accommodating pedestrians.

So, for now, it's going to be taxis, and here are three tips for you. 1: don't assume that a street address will be good enough to get you to your destination. If you can get hold of GPS co-ordinates for where you want to be, it'll save you a lot of time. (If you can find your destination on Google Maps, right click on it and select 'What's Here?' to literally get your bearings.) 2: don't expect the meter to be running. Most of the time you'll be charged a flat fare, and it's a good idea to confirm it with the driver right at the start. 3: if you find a good taxi driver, stick with them - oh, who am I kidding, stick with him. Knowing the phone number of a driver who's been reliable in the past is a big help. (My driver for the week was incredibly accommodating and, on the day after the Manchester Arena bombing, was the only person I talked to who made a connection between my accent and the story he'd heard on the news. His statement on the matter - 'Daesh are the worst motherfuckers in every country' - was surprisingly comforting at the time.)

If you're looking for things to do in the evening, well, as I hinted in the MostlyFilm piece, best of luck with that. Even if you do find something, getting to it without a car is a whole other problem. My hotel for the week - the Ibis Riyadh Olaya Street, which was perfectly fine - was notable for being across the street from the Kingdom Centre, one of the largest malls in the country. That street, however, had ten lanes of traffic roaring along it, and no official mechanism for allowing pedestrians to cross it. Eventually I twigged how the local daredevils pull it off: each side of the road has two lanes of slip road alongside the three lanes of main traffic, and the point where the two join in a U-bend forces everything to slow down fractionally, which gives you an increased chance of making it over without being squished.

It's a moot point as to whether the Kingdom Centre is worth the hassle it takes to get over there: for someone like me who's experienced the swankiest malls Dubai has to offer, it's rather drab by comparison. For Londoners, the best way to describe it is this - imagine the high end brands you find in the Village at Westfield, but transplanted to somewhere with the style and sophistication of Wood Green Shopping City. Most of my problems with it were cultural: shops shut down for half an hour at a time for prayers (which confused the hell out of me when my first visit to the mall coincided with sunset), and both the shops and food court are crudely segregated into areas for 'men' and 'families', which is particularly awkward if you're looking for somewhere other than your hotel to have dinner.

Still, there's one part of Kingdom Tower that makes it worth a visit: the observation deck on the 99th floor. It costs you 60 riyals (approximately £12) to go up there, but there's no obvious time limit on how long you can stay. (Do be warned, though, that the ticket desk only takes cash.) There are only really two views available from the top: the one you can see at the beginning of the MostlyFilm piece, and a more under-construction one in the opposite direction. There's a sign at the entrance which says you can't take cameras up there, but taking photos with your phone seems to be just fine, as long as you stick to what's visible out of the window and don't try to get a sneaky shot of the packs of giggly teenage girls in hijabs who seem to gather there around sunset. (If you're doing this, then sunset is absolutely the best time, as the blazing sun slowly gives way to the lights on the skyscrapers.)

So, that's Riyadh. I know the MostlyFilm article also covers Dubai, but to be honest not much has changed there since my last visit. Well, maybe one thing. Last time, I was annoyed by how my normal walking route to the office had been destroyed by roadworks (see picture at top of this page). Well, it's fixed now. It turns out they were digging up the pavement and the road so that they could construct a cycle lane in between the two. The idea of anyone in Dubai using a bicycle seems as ludicrous to me as that of anyone in Riyadh using a subway. I'd be happy to be proved wrong, though.