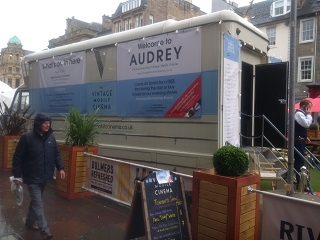 I know we've been doing this for decades, but it still comes as a surprise when we get to 9.35am on the final day and everyone's all ready for our 10 o'clock exit deadline, calmly sipping tea and munching on croissants from The Wee Boulangerie. I'm sure in the past it's been a mad rush to get everything together, but we seem to have it all under control. At least, we do until we get to Waverley station to leave our cases in left luggage for the day. There's an enormous queue 0f people trying to do the same thing, which is barely moving: apparently all bags containing electronic equipment have to go through a scanner, which slows the whole process down. More alarmingly, the prices for depositing cases have been elevated to taking-the-piss level, with a £12 fee for anyone leaving a bag for more than three hours. My own wheelie case is relatively small, so I make the tactical decision to keep it with me, hoping I can squeeze it into our last few venues of the festival.

The first one of those, ironically, is one of the smallest places we've seen a show in this year - happily, there's enough legroom between the seats to make it simple. The venue in question is the Vintage Mobile Cinema, a caravan parked outside the Assembly Rooms. It's one of seven mobile cinema units made in the 1960s, designed to tour around the country showing training films as part of Harold Wilson's technology initiative. They stopped being used in the 1970s, and disappeared one by one. This particular example (known as Audrey) is now the only one left, and has been restored by Ben Moorhouse to work as a travelling cinema once more. For this year's festival, he's running several programmes inside it: free newsreels during the day, and comedy events in the evening.

We battle through the rain to catch the cinema's first free screening of the day. After a short film made by Moorhouse to document the history of the cinema, we get a selection of Pathe News clips covering the Edinburgh Festival, starting with the first one in 1947. It's fascinating to be reminded that the Festival came directly out of the post-war regeneration effort, with the tattoo having to be illuminated by four searchlights as full floodlighting wasn't available. The clips selected (also covering 1953 and 1969) are entertaining enough, although Pathe have gone for the obvious focus on bagpipes and kilts rather than the more international side of things. Our time in the mobile cinema is over after ten minutes or so, making it our shortest event of 2017, but a rather delightful one. It turns out that Moorhouse's aim was to use these Festival screenings to promote his attempts to crowdfund a restoration of the cinema's trailer unit into a fancy bar: sadly, by the time you read this the crowdfunding effort will have closed without him reaching his target of £80.000. Hopefully, he'll be able to find another way to finance the work. 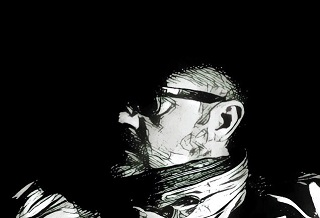 After picking up some worthy sandwiches for lunch at Social Bite, we cross town (yes, it's another day of zigzagging across the city, and in nasty rain too) to compensate for our missing Phill Jupitus on Wednesday. It's hard to believe that ten years have elapsed since Jupitus quit his breakfast show on 6Music so that he could devote time to "mucking about on the Edinburgh Fringe." This year, that mucking about has been ridiculously wide ranging - he's had several shows on every day, including stand-up, monologues, and sitting around in Edinburgh galleries making sketches of the art. He's also grabbing guest slots in any other show that'll have him - last night he took on a role in the play Nassim at the Traverse, and tonight he's introducing a screening of Bedazzled at the Vintage Mobile Cinema that we've just come from. However, we're not doing any of that: instead, we're at Bannerman's watching him return to his 1980s poetry roots with Phill Jupitus Is Porky The Poet In Survivalve.

Porky The Poet was the first incarnation of Jupitus that I ever encountered, as he frequently did opening slots for Billy Bragg in his heyday. Since those days, performance poetry has become a much bigger thing, and it's nice to see that Porky isn't just cashing in on his reputation from 30 years ago. There's a lot of new material in here, opening with the topical Nobody Fancies Theresa May and keeping the grumpiness going from there. There's an interesting mixture of styles too, with gag-filled poems rubbing up alongside more poignant ones and the occasional bit of experimentation (notably his multiple attempts to create poetry from the titles of ten shows from this year's Fringe programme).

Jupitus claims he's in a "funny mood" throughout, but that gives the set an interesting bit of an edge. Besides, there's plenty of evidence of a big heart under the surface bluster: as with previous Porky shows, he uses his celebrity status to get wider exposure for guests who need it. Today, he introduces a lovely set from fellow poet Iona Lee, and gives Earl T Grahame a chance to plug his Black Comedy Showcase that's the next thing in this venue. Jupitus wraps it all up with a terrific extended poem (written as the acceptance speech for his honorary doctorate from the University of Kent at Canterbury), and a neat solution to the age-old problem of how to get the audience to leave a tiny venue in an orderly fashion. Which is tricky when some people have put their suitcases in the aisle. Our final event of the year is at the Book Festival, and the suitcase proves to be even more of a problem here: not just because the legroom between the seats is so small, but also there's the general issue of carrying a suitcase into a lecture entitled Does Terrorism Work? It's a discussion involving authors Richard English and Mark Muller Stuart, named after a book written by the former. His answer to the question is that it depends what you mean by 'work': terrorist acts never really achieve their stated strategic aims, and are usually more geared towards generating publicity for their cause. (Thank God they held this talk back till the end of the Fringe, you don't want to give those student revue groups any ideas.)

Ultimately, saying that you won't negotiate with terrorists is self-defeating: no progress is going to be made until people get to sit around a table and talk. This is where Stuart comes in, given his role as a professional mediator: his own book Storm In The Desert discusses his role in the aftermath of the Arab Spring. He agrees with English that you're never going to give the terrorists exactly what they want, so it's all about how expectations are managed on both sides. You also need to be aware that the aims of the individuals you're negotiating with may not align exactly with the aims of those they represent. It's all heavy stuff (particularly for our final event of the year), but there are some fascinating insights from both writers, and host Michael Williams throws in some carefully timed asides to break the tension in the room. After the discussion of an audience question about female involvement in terrorism, Williams casually notes "of course you only need to pay female terrorists 87 cents to the dollar, so they help you save money too."

And from there it's on to Waverley station and the train back home. I have a vague plan that the final two days of the Edinburgh Diary will get written on the train, but I end up zonking out instead, which is why you got them both a day late. Having had chance to sleep on it for a couple of nights, it strikes me that I didn't see anything that could be remotely described as bad this year: there were a couple of disappointments like Sara Pascoe's Book Festival talk and Race Off, but those can both be blamed on my own personal expectations for them. As for high points, The Paper Cinema's Macbeth is probably the best bit of theatre I saw: Roger McGough and Chris Riddell were responsible for the most entertaining Book Festival event: and Michael Legge provided the best hour of comedy, as well as the most corrosively recurring earworm in a Fringe that had quite a few of them. (Just a mere mention of the phrase 'fucking vegan food' gets The BBG twitching.)

Expect some final reviews in Spank's Pals' Postscript in a few days time: expect the next one of these Edinburgh Diaries to come in 2019, as The BBG and I are due for another year off. In the meantime, I'm going to have another lie down. Being a monkey, and all.