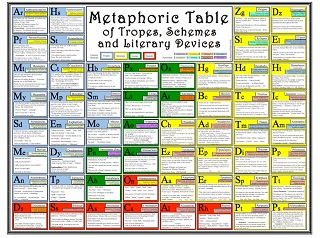 Difficult preaching is Posdnuos' pleasure
Pleasure and preaching starts in the heart
Something that stimulates the music in my measure
Measure in my music, raised in three parts

A small catastrophe to start off the day. The Belated Birthday Girl and I decide to see the play The Girl Who Jumped Off The Hollywood Sign, because we're curious to see how it fits into the Stieg Larsson trilogy. We haven't bought tickets in advance: we're just going to roll up to the Roxy box office five minutes before curtain up to see how many they have left. Turns out that in this instance, the answer to that question is one. We decide against it, go down the road to Black Medicine for a coffee, and do some last minute replanning.

In a stroke of genius, The BBG pulls out the PBH Free Fringe programme to see if there's anything free starting soon near our current location. Which is why a mere 20 minutes later we're in the labyrinthine Black Market complex for an uncategorisable show called The Metaphoric Table. It's the work of actor Raymond Burke, created as a solution to a problem I hadn't really considered before. The English language is a magnificent thing, full of all sorts of devices to keep writing interesting. Unfortunately, the reference guides for those devices are usually badly laid out: if you read a sentence where a single word works in two different ways (like 'took' in "Mr Pickwick took his hat and his leave"), and try to look up what that device is, you'll get to the end of your reference book before you discover it's a zeugma. Burke's idea is to divide these devices into four classes - tropes, schemes, ironies and sounds - and lay them out in something that looks like the periodic table of elements, to show how they relate to each other.

You could argue that the whole show is Burke's sales pitch for the poster of the table, or the book that he's planning to expand it into: but it's still a very entertaining lecture. He explains many of the devices listed in the table, giving copious examples from everything from classic literature to punk rock songs, and even challenges the audience a couple of times to come up with their own examples. He's an engaging speaker, and his enthusiasm is infectious - not just for encouraging you to use these devices in your own language, but to be more familiar with what they're called. So, for example, I now know that the reason why I enjoy De La Soul's The Magic Number so much - see top of page - is because of its frequent use of anadiplosis. Sometimes, it turns out, small catastrophes have happy consequences.

We grab lunch at Dishoom Edinburgh - it's just like the ones we have in London, except you can actually get into the Edinburgh branch - and then to our first visit to the Stand this year, to catch Simon Munnery in his traditional mid-afternoon slot. After The Metaphoric Table, it turns out to be our second educational show of the day. It's got the title Renegade Plumber, which is an oblique reference to a problem that's been obsessing him for over a year now: how to heat a tent without starting a fire in the middle of it. He's come up with a solution that involves a pan of boiling water and a hosepipe, and a large part of the second half of the show involves him discussing the technical problems he's encountered and how he's overcome them. You'll come away from this show knowing a lot more about the physics of underfloor heating systems than you did going in, and there are far too few shows on this Fringe you can say that about.

This being Munnery, he can't stick to a single topic for an hour. He takes us through a Glaswegian dialect song called Mrs Barbour's Army, which describes a little-known rent strike that took place during the First World War. He updates us on his daughters, who quite definitely have been passed on his genes, as he reads the letters from one of them demanding an iPhone for her birthday. "People older than me, younger than me and the same age all have one." There's a short, angry interlude about Grenfell Tower, and a pleasing rewrite of one of his classic routines to wrap it all up. It's the usual mixture of rambly anecdotes and razor-sharp one-liners, and that's why we keep coming back to him year after year. 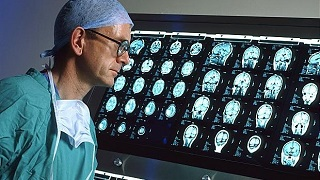 We're off to the Book Festival next, at the suggestion of The BBG. She first encountered Henry Marsh, Britain's leading brain surgeon, when he was the subject of a documentary she watched at the LFF in 2007. When it was originally programmed, the film had the magnificent title Russian Roulette With Two Revolvers: by the time of the screening, it had been retitled as The English Surgeon, which is much more dull. But the film was fascinating whatever you called it: Marsh has an extraordinary job, and some equally extraordinary stories about it. He retired from active service in the NHS a couple of years ago, but he still does consultancy in foreign countries that want to learn about the surgical techniques involved. He's also been writing about his experience, with his second book Admissions just hitting the shelves now.

Marsh is an enjoyable speaker – he's got a considered opinion on most health-related issues. He still has a healthy sense of wonder regarding the brain: “everything we experience is electrochemistry, and that's weird.” He talks about the nerves he still feels when diving into the top of someone's head, and how they're an important part of what gives him an edge. He describes some of the most astonishing work he's done, such as brain surgery under local anaesthetic, allowing the patient to view their own visual cortex as it's being worked on. (“You'd think it would cause some sort of feedback loop, but it doesn't.”) He's fascinating on the importance of his teaching work, and how best to train surgeons to do what he used to. And to the delight of the audience, he has very strong views on how the NHS needs to be funded properly, referencing the old saying about the two certainties in life being death and taxation: “you can't have less of one without more of the other.” 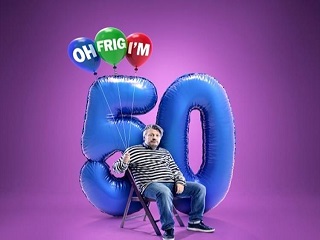 I remember coming up here on the train with Spank's Pals in 2007, and Rhian complaining that comedy these days was all young people talking about young people things. I pointed out that there was at least one comic bucking the trend that year, doing an entire show about his advanced age and how it was affecting him. Rhian had a lot of sympathy for this, until she found out the show was called Oh Fuck I'm 40, whereupon she started swearing a lot for some reason.

Ten years on, Richard Herring has written a follow-up show called Oh Frig I'm 50, which he assumes is going to be the penultimate episode in a series. When he was 40, Herring was going through a very public mid-life crisis: now he's fifty, and he's settled down with a wife, a small child and another one on the way. Inevitably, a large part of his focus is on how ageing has affected his sex life: ten years ago he could hang out with women in their twenties and get away with it, but these days they look through him like he wasn't there, right up to the point where he starts masturbating.

It's the sort of descent into filth that we've come to expect from Herring, but thankfully that's not the entire show. He's careful to contrast his 40 year old self with how he is today, and assesses what's changed for the better as well as for the worse. For those of us of a similar age to him, it's a nice summary of the good and bad points of how life is for us now. It has to be said that Herring looks really tired on stage here, and it's hard to tell whether it's an act or a consequence of his increased responsibilities. Still, the half-dead-on-his-feet look suits the nature of this show's material, so as long as he doesn't cause himself any permanent damage I guess it's okay.

To wrap up the day, we grab dinner at Holyrood 9a followed by a show called The Best Of Daphne.There's a complicated story behind this. Last year at Mervyn Stutter, we saw the comedian Matt Forde for the first time. Not too long after that, he started a political satire show on Dave called Unspun: yet another of Britain's attempts to do something like The Daily Show, but weekly and in short batches of six weeks at a time. We became quite fond of the show's Asian correspondent, a British Chinese comedian called Phil Wang: so when we saw he was doing a solo show at Edinburgh, we resolved to go and see it. Unfortunately, we didn't resolve hard enough: it turns out that Wang is a fairly popular bloke thanks to appearances on shows like Mock The Week, and his run here is completely sold out.

There's a silver lining to this cloud, though. Because for a couple of years, Wang has been a member of a sketch group called Daphne, along with Jason Forbes and George Fouracres. They've had a couple of successful runs at the Fringe in recent years, to the extent that this year they announced two shows at the last minute called The Best Of Daphne, a compilation of old material. So, at least we could be in the same room as Wang. It was a close-run thing, though: despite not being in the programme, these shows have sold out just as quickly as Wang's solo slots.

Sketch shows used to be the bread and butter of Fringe comedy in the pre-alternative days, and it's interesting to see the form coming back into fashion. The only contemporary group I have to compare Daphne against are Sheeps, who we caught at the Manchester International Festival two years ago. Daphne have a lot of similarities: plenty of surrealism, but also plenty of darkness where you least expect it, as simple scenarios like a confrontation between Peter Pan and Captain Hook take a suddenly nasty turn. But that's part of what makes sketches work, I guess – you have to surprise people, and only have a short time in which to do it.

Daphne, it has to be said, are very good at surprising people, even when they're deconstructing the form by showing you how those surprises work. They also have the added advantage of being, to quote their intro, “the most racially diverse sketch show on the Fringe,” which means they can throw in some delightfully awkward race-based material into the mix. There's a palpable love of language and an equally palpable love of silliness: I guess it was always on the cards I'd become a fan.