It's a bit late - after all, we came back from the 2017 Edinburgh Festival over four weeks ago - but here, finally, is a wee wrapup of what was good and bad this year, featuring contributions from a few of Spank's Pals.

(Not included: the Edinburgh Tattoo, because none of us saw it, although as usual you couldn't avoid the closing fireworks display if you were on Princes Street at the right time.)

(Also not included: the increasing look of despair on Roger McGough's face as he realised his Book Festival poetry reading was taking place at the same time as the fireworks down the road.) 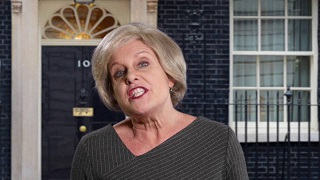 Let's start with a good news story. Jan Ravens' last appearance at the Fringe was in 1981, when she directed the Cambridge Footlights (Stephen Fry, Hugh Laurie, Tony Slattery, Emma Thompson) on the way to winning the very first Perrier Award. Jan only appeared at this year's Fringe to support her son who was up doing a show, but this quickly snowballed into doing lots of extra gigs, and what a treat it was to see her. If you closed your eyes it was almost impossible to know if it was the real person standing in front of you or Jan, so good were her impersonations. It was a lovely feel good show that the Muses and I much enjoyed.

But like our fave monkey, my comedy highlight of the week was Michael Legge. No one does invective like him (and I include Frankie Boyle here), his spin on Ed Sheeran was totally scathing. But what separates Legge from other comedians of this type is he can switch on a boyish charm that is totally winning, and as our fave monkey has already pointed out the ambiguous finale paying tribute to Bowie, or was it his dead dog Jerk, was hilarious.

Best rising star of the week must go to Sophie Willian for Branded, an hilarious hour about how everyone wants to brand you, and how difficult it is to escape that branding, a show that really made you think as well as enjoy her ribald humour. Best theatre of the week went to A Super Happy Story (About Feeling Super Sad), the best show about depression I have seen at the Fringe (it has become a big theme at the Fringe in recent years). It was closely followed by Siren, a retelling of the Greek myth of a beautiful woman luring men to their doom. This was a beautiful piece of physical theatre, the graceful movement of the siren on the tiny rock-like set complemented by an agile man on roller blades, who played all the men who met their doom. The image of another dead body being washed in and out by the tide was made more haunting and powerful by the effortless technique of the roller blader.

My moment of the week came at Mr Scruff. Our fave monkey had assured us tea would be available at the gig, as in real life Mr Scruff sold tea at his Manchester shop. Unfortunately none of this came to pass, so I stood in front of Mr Scruff on the decks and gave him the universally recognised T sign, which resulted in 2 brews for me and SeaPea. A nice touch, but as our fave monkey commented, we were never going to make it through to a 4am finish.

Beer of the week was Stewart's Pentland IPA: and restaurant of the week, Aizle, which was over the road from our accommodation. Impossible to get a table, but we liked the idea of only having a tasting menu, something I think other restaurants will follow suit. 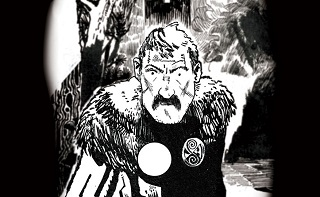 This year’s Festival had quite a few highlights, and not a single poor show, although there were a few that didn’t live up to what I had hoped from them.

Vying for top spot would probably be The Paper Cinema's Macbeth, which felt to me very much like the sort of animation I’d expect to have seen in the McLaren awards when there used to be an Edinburgh Film Festival, but was all the more impressive for being performed live: and Roger McGough & Chris Riddell, which was a unique blend of poetry and live illustration. Close behind those was Had We Never: as someone not particularly familiar with the work of Burns, I found it an entrancing night, making excellent site-specific use of a beautiful venue. I also very much enjoyed Blak Whyte Gray, Room 29 and Iestyn Davies: a fine spread of music in the International Festival.

Poetry / spoken word provided a couple of other highlights, though very different from each other: An Evening with an Immigrant, and Phill Jupitus Is Porky The Poet. There were no stand-out stand-up shows for me this year, although I was very taken with Gary Delaney at Mervyn Stutter. And I was also fascinated by Geoff Norcott’s spot at Political Animal: it’s impressive for someone with his politics not only to appear on the bill at a show like that but also to be basically the best act on the night. I was disappointed not to be able to get in to see Phil Wang’s show, but his sketch troupe Daphne was probably the best comedy show I saw overall, and certainly made a good substitute.

The best random choice for me was The Metaphoric Table, which we picked as a last minute substitute, but which was lots of fun, and also educational.

The Book Festival provided one of the few disappointments – Sara Pascoe – mainly because it felt as though we’d walked in on a conversation that we’d missed the start of: but it also provided an intelligent discussion on terrorism from Richard English & Mark Muller Stuart. The other slight disappointments were Brendon Burns & Craig Quartermaine’s show basically being a re-run of last year’s, and Ben van der Velde not really doing his show at all: both were enjoyable enough, but not really what I had hoped for.

Finally, to food and drink: we managed to try a few restaurants we’d not been to before, but it was the bars that impressed more. We got to the Nicolson Street branch of Shri Bheemas, a restaurant which we know from Aberdeen. It wasn’t bad, though their decision to jettison Punk IPA in favour of a beer brewed for them by Keith was not a great one. The food wasn’t quite as good as my memories of the Aberdeen branch, and nowhere near as good as Mother India’s Café, which we managed a repeat visit to this year. We also got to the new Edinburgh branch of Dishoom, which is basically the same as any other branch, but I did get to try their new Jackfruit Biriyani, which is excellent. The one place we went to which was completely new for us was Paradise Palms, and I really liked their veggie “Soul Food”, with my Seitan and blackbean Meatball Po'boy good enough for me to forgive them the wait. Probably the best meal this year was a repeat visit to Iris, although without the cheap lunch deal we had last year, I think it was also our most expensive.

As mentioned, we also got try a few new bars, recommended by one of the BrewDog shareholders on the Equity For Punks forum. Salt Horse we’d in fact discovered for ourselves last year, but this time we got to go to the bar itself, which was pretty cool and had a great selection of beers – including access to a vast number of bottles. But for cool vibes Nightcap, right next door to The Stand, would win: although it’s not much of a craft beer specialist, it does have a small but perfectly formed selection of cans. And for sheer fun atmosphere – and some decent beers – Hoot The Redeemer would take some beating. Although we didn’t get to try their boozy ice-cream: maybe next time… 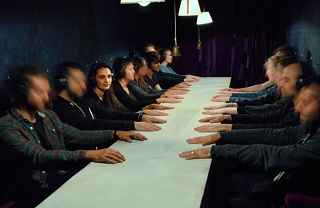 Didn't get to see everything I wanted to but saw a few decent things and not too many awful ones so I'd count that as a success! I think my main duffer was The Chess Player, which was a one man show and a nice idea but extremely self indulgent and too long.

Most interesting thing was probably Séance where we sat inside a totally dark container wearing headphones and with our hands on the long table in front of us while "things" happened. It was pretty creepy - it felt like there were people walking up and down the table and talking to us from various bits of the room.

I was leading a "Shakespeare's London" tour yesterday morning along the Bankside when, standing with my group opposite the Clink Prison museum, I became aware of another tour group which had arrived just beside me. Their "guide" had not observed the usual etiquette of keeping distance from a group that has arrived at the spot first, and he proceeded to speak to his group using amplification. He didn't really need amplification as he had a loud booming voice which was very familiar.

Yes, it was our final night in Edinburgh entertainment come back to haunt me - Will Seaward wearing a Hogwarts scarf and leading a Harry Potter themed tour!!

I don't normally contribute to this bit, but we've got some space at the end so what the hell. You've already seen all my reviews from the week elsewhere on this site, you don't really need me to repeat them. However, it's struck me that this year's Festival was a particularly good one for music - or more accurately, earworms. There were several tunes I heard that were stuck in my head for days afterwards, and some even longer than that. So partly as an act of exorcism, and partly to share them with you, here are six of my top seven tunes from Edinburgh 2017 (only one of them is by the original artists who performed at Edinburgh - and if we're honest, that rendition of Der Rhein'sche Wein needs to be a good two octaves higher - but you'll just have to deal with it)...

...and because it's not on Spotify, here's the seventh (and best) one. I know what you'll be singing inside your head for the rest of the day now. Being a monkey, and all.