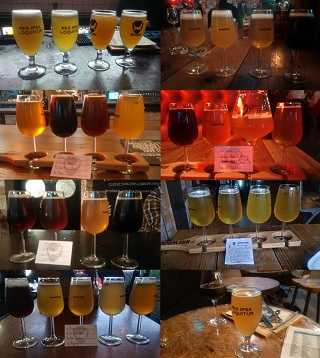 I won't lie to you, it's all been a bit one-track around here this month. That's always the case when it's a festival month, whether it's Edinburgh or London Film. The latter finished last week, and there's still a little more writing to be done on the subject, which should be with you soon. But in the meantime, I'd understand if you were looking for some sort of break after a few dozen movie reviews in a row.

So how about a few dozen beer reviews in a row? Would that work for you? No? Well, tough.

I've mentioned BrewDog's Collabfest here in previous years, but only ever in passing. My report on the first one in 2013 was limited to a mere couple of lines in the middle of an LFF review. In brief, this was the deal: BrewDog put on a festival of new beers in their bars, where each beer was a collaboration between the staff from one of the bars and a brewery local to them. The number of beers was driven by the total number of bars they had open at the time: back then, it was thirteen, and we only had chance to sample seven of them in the slot we'd left between two films.

Over the years, Collabfest has grown, and I've generally summarised it briefly in Simian Substitute posts. In 2014, it grew to sixteen beers - and as by then there were four London BrewDog bars, it made for an enjoyable day-long crawl around them on the Overground, drinking four beers in each. This was also the first time that I attempted to live-blog the beers as we were drinking them, via my rarely-used Moblog site. By 2015, it was up to 21 beers: in 2016, that number grew to 27, with the added complication of our being in Norwich for most of the weekend that the festival now occupied. (Just in case you were wondering: The Belated Birthday Girl and I attack these beers in flights of four at a time, where each beer is served as 1/3 pint that we split between us. We're not monsters, you know.)

Last weekend (October 20th-22nd), we had Collabfest 2017. There are now 34 bars involved, including the ones in Sweden and Germany. So that means 34 new beers to try. We had an entire weekend in which to attempt drinking them all (with some gaps on the Friday and Saturday nights for previously-arranged social engagements), and six bars in London to run between in order to maximise our chances. And, as in previous years, I was determined to post tasting notes and pictures on Moblog as we were drinking.

How did we get on? Follow the links below to find out. All timings are approximate.