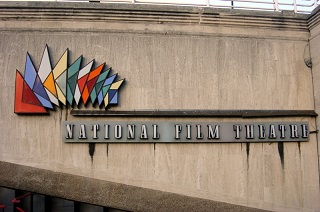 If you've ever been in London and wandered past Waterloo Bridge, you may well have seen that sign over there. It dates back to the original opening of the National Film Theatre at its current Southbank location in 1957, and let's be honest, it looks like it.

Sixty years later, the building's been renamed as BFI Southbank, and the only trace of its original identity is that they still inexplicably call the screens NFT1, 2 and 3. The only trace except for, of course, that sign on Waterloo Bridge. And to mark its 60th birthday, the design of the branding for this year's London Film Festival is based around the retro look of the sign. Which is nice.

To be slightly cynical for a minute, it's a rare example of the current LFF administration acknowledging that the festival has had a past. After all, it's the sixtieth anniversary of the first ever festival, and they're making even less of a fuss about it than they did for the sixtieth festival last year. (It's the 61st this year, do the sums.)  Once again, there's no indication of the festival number on any of the promotional material, which is one of those changes that I can't help but associate with Clare Stewart since she took over running of the fest in 2012. Good news: at least that logotype design they've used for the last four years has finally been changed. Bad news: the posters advertising the LFF on the tube have neither a phone number nor a web address on them, which seems rather careless if you want to encourage people to find out more about it.

Publicity aside, what can you look forward to this year? Well, as far as films and events go, start with the official site that the posters don't tell you about. As you'd imagine, I've booked for several of those films already, although I can't guarantee how many of them I'll actually see. The tube strike that was threatened for Thursday at least appears to have been called off: more worrying is the ongoing industrial action by the staff at Picturehouse Cinemas, who've been campaigning for a living wage for over a year now. It looks like some of the screenings at Picturehouse Central may be affected as a result - which shouldn't come as a surprise to the BFI, seeing as exactly the same thing happened at the Picturehouse-owned Ritzy last year. I'll be keeping an eye on that one.

But the main focus here, as it has been since the first LFF I covered live back in 1998, is on daily film reviews: seeing a couple of movies a day at festival screenings, and then writing about them for you the morning after. This will be my twentieth year of doing that, and my 29th festival overall, somehow. Can I get to the end of the next twelve days without disruption from strikes or nodding off during my fourth film of the day? Watch this space.