Simian Substitute Site For October 2017: Lots Of Kids, A Monkey And A Castle 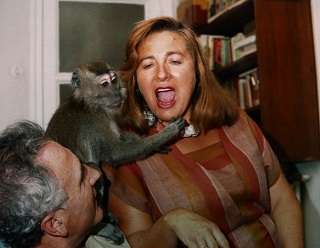 Art: Last Sunday, while America was getting itself into some sort of ridiculous frenzy about black football players protesting police violence, a bunch of us were at Tate Modern visiting an exhibition entitled Soul Of A Nation: Art In The Age Of Black Power, and wondering how much things have changed in the last 50 years. The exhibition covers a huge emotional range, starting with the bold propaganda designs of the original Black Panthers, and ending with a joyous public event by the New York gallery Just Above Midtown. It even manages to take in some abstract pieces, which were initially criticised for not having much to do with the ongoing struggle, but could be interpreted as the visual equivalent of what was happening in jazz music at the time. You'll easily find something here that'll surprise you: for me, it was the extraordinary photographs of Roy DeCarava, who worked with a palette of black and fractionally lighter black. The exhibition runs until October 22nd: if you can't make it there, you can console yourself with the curators' playlist of relevant music from the period.

Music: When The Belated Birthday Girl and I go to a new place, we always like to do our research first. So part of the preparation for our 2015 trip to Italy involved me making her watch Pink Floyd Live At Pompeii. It's not an entirely ridiculous idea: along with the footage of the band playing in the empty amphitheatre, you got to see them exploring the ruins, which gave you a feel for the scale and grandeur of the place. We saw Pompeii for ourselves back in June 2015: one year later, the Floyd's guitarist David Gilmour returned there himself for a pair of solo gigs in the same amphitheatre, this time in front of an audience. Watching the film of those gigs, inevitably titled David Gilmour Live At Pompeii, the first thing you notice is that every bugger in the audience is trying to film the show on their phones, despite the obvious presence of a professional crew with a battery of 4K cameras. The film is less interested in showing you the areas surrounding the arena than its 45-year-old predecessor: as Gilmour himself says, Floyd At Pompeii was really an art movie, whereas Gilmour At Pompeii is a more straightforward record of a live event. Still, it's a very entertaining concert flick: seeing so many Gilmour guitar solos back to back does make you realise how they all have the same trajectory (slowly up the fretboard, and then quickly down again at the end), but the songs themselves all work just fine individually. And, predictably, a solo gig from a Pink Floyd member has a spectacularly OTT lightshow: most notably in Run Like Hell, where the strobes get so intense that the entire band has to wear sunglasses. (If the comments on that video are to be believed, Gilmour's justification for this is glorious: "we thought yeah, let's get everyone to do it, and it'll be just like Wallace & Gromit when the rocket takes off to go to the moon, and all the mice put their sunglasses on.") The concert film had a blink-and-you'll-miss-it run in cinemas a couple of weeks ago, and has now been released on DVD, Blu-ray, CD, audio download, video download, and probably even wax cylinders if you ask them nicely.

Theatre: The legendary British cinematographer Jack Cardiff died in 2009. The BBG and I saw him in person in, I think, 2003, giving a Q&A session after a screening of A Matter Of Life And Death. He would have been 89 by then, and it was sadly starting to show: he'd never quite answer any question he was asked, and would frequently go off on odd tangents, albeit entertaining ones. When the Hampstead Theatre announced that Terry Johnson would be writing and directing a new play called Prism about the last years of Jack Cardiff's life, and its star Robert Lindsay kept drawing comparisons to King Lear in interviews, my brain steadfastly refused to make any sort of connection with that 2003 appearance. So when I finally got to see the play, it took me completely by surprise and kind of broke me a little bit. Yes, it's a play full of references and in-jokes for the movie buffs in the audience (you'll spot them quite early on, chuckling away at an extended riff about aspect ratios). But it's also a portrayal of a master craftsman in the final years of his life, very slowly discovering that his faculties are leaving him one by one. Lindsay's performance is astonishing, never going for cheap sentiment but quietly weaving devastating moments of clarity into his mixture of confusion and anger. Aided by a hard-working supporting cast (don't read the programme beforehand if you want to be surprised by just how hard-working they are), it's another one of those plays like last month's The Ferryman with every possible emotion crammed into its running time. Prism is only on at the Hampstead until October 14th, and is sold out for its entire run, but I would be very surprised if it doesn't have a life elsewhere beyond that.

In the meantime, your Simian Substitute Site Of The Month for October 2017 is the official site of the film Lots Of Kids, A Monkey And A Castle - or, at least, the single page set up by its sales agents Dogwoof, which may expand into something more substantial closer to the film's theatrical release. It's a documentary by Gustavo Salmerón about his mother, Julita Salmerón. When Julita was a little girl, she decided that there were three things she wanted when she grew up: lots of kids, a monkey and a castle. Gustavo has put together her story from his collection of home videos, and you'll have to see the film to find out if she achieved her aims.

Why mention this now? Because it's coming to the London Film Festival, with a pair of screenings on October 7th and 8th. I won't be seeing it, unfortunately, as my schedule's pretty crammed already: the trailer is probably as close as I'm going to get. But there are plenty of films I will be seeing there, and for the (gulp) twentieth consecutive year I'll be giving you daily reviews on this site as they happen. It all starts on Wednesday October 4th: be there, or grumble about it in the comment box below.