Reviewed today: Here To Be Heard, Our Time Will Come, Salesman, Scarface. 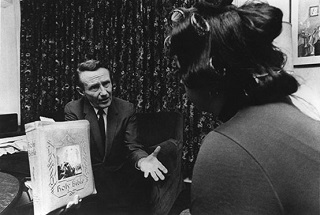 I only have one item in my DVD collection that could be really classed as a snuff movie: it's Gimme Shelter, the Maysles brothers documentary about the catastrophic Rolling Stones gig at Altamont. Apart from that, there's a shameful gap in my film knowledge when it comes to the work of Albert and David Maysles, with the minor exception of a rather odd musical theatre adaptation of their classic Grey Gardens. So, rather like when we watched Frederick Wiseman's early Hospital last year, this is a long overdue bit of catching up, courtesy of the LFF's Treasures From The Archive section.

Salesman, made in 1969, does exactly what it says on the tin - it shows you four door-to-door salesmen from Boston travelling around and trying to flog their wares. There's a catch, though: the wares they're trying to sell are kitschly over-illustrated Bibles. It potentially gives them an edge over other salesmen - by implication, anyone who doesn't want to buy their product must be evil. Despite this, they seem to have a lot of trouble selling Bibles, and a large part of the film involves them sitting in hotel rooms after a day's work, lambasting the moral shortcomings of the people they've met.

Salesman's acknowledged as one of the pioneers of the fly-on-the-wall style, and all of the good and bad points of that style are on display. Editor Charlotte Zwerin gets equal credit with the Maysleses for the film, and decades of reality TV have made audiences more aware of the power an editor has over a documentary. Here, it's easy to see how tweaking the ratio of successful to failed sales included in the film would change its story altogether. Similarly, it's hard to tell how much we're supposed to like these guys, as the frequent depiction of them badgering customers who obviously can't afford to spend money on a new Bible does little to endear them to us.

But if you're happy to accept that schadenfreude is the primary emotion Salesman has to offer, then it's a riot, because it's a joy to watch these men fail at their job so badly. Maybe it's the hypocrisy stemming from the direct collision between commerce and religion that triggers this response, like the happiness we feel when a televangelist is caught with his hands in the till. (At one point, one of the salesmen tries to reassure a potential customer that "nobody will come to repossess your Bible if you miss a payment". That, Alex Cox, is the sequel to Repo Man you should have made.)

There's certainly cruel entertainment to be had from seeing the universe conspire to stop the salesmen from doing their job: whether they're dealing with individually awkward customers, or discovering too late that they're working in a largely Muslim district, with road signs indicating Ali Baba Street and (no kidding) Sesame Street. Of the four we meet, Paul Brennan has the hardest time: he starts off annoying (apparently saying things repeatedly in a bad Irish accent is what they have in Boston instead of jokes), and ends up utterly broken. If this film is anything to go by, the only award he's going to win is Most Likely To Be Running Amok In A Public Place With An Automatic Weapon Within The Next Five Years. (Happily, that didn't happen.) 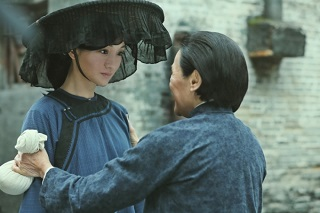 Watch enough Chinese and Hong Kong cinema over the decades, and you eventually realise that they still really hold a grudge against the Japanese for their occupation of China in the Second World War. It's a bit like Britain's ongoing obsession with the Germans, I guess. Anyway, here's another film about it.

At the start, Our Time Will Come looks like it's going to focus on one specific tale of wartime heroism: the evacuation of several Hong Kong intellectuals out of Japanese occupied territory into the safety of northern China. But this turns out to be merely the first act of the film: because this show of resistance inspires Lan (Xun Zhou), a landlady's daughter tangentially involved with the evacuation, to join the rebels and work more closely with them. It doesn't hurt that one of the rebel leaders is the ridiculously heroic and charming Blackie Lau (Eddie Peng).

I've seen enough Hong Kong cinema to realise how this story could have been told: as an all-action festival of blood and bullets, with Blackie's wisecracking violence to the fore. When you find out that one of the territories the evacuation route runs through is controlled by a gang boss with the magnificent name of Big Eyeballs, you suspect that's exactly what this film is going to be. But it's directed by Ann Hui, who's a much classier director than that. (She was previously at the LFF with A Simple Life, whose lead actress Deanie Ip play's Lan's mother here.) This is a much more tasteful and restrained affair than an equivalent male director would have turned out: it shows in its focus on the female lead, and on the quieter acts of heroism that the average Chinese person undertook in the war.

Even when Hui shows Japanese soldiers executing prisoners with a bullet to the head, it's done with the minimum of unpleasantness. Having said that, it should be noted that in all other aspects, the Japanese are depicted using all the clichés these films tend to use: "cruel but cultured," is how The Belated Birthday Girl sees the stereotype. Maybe the filmmakers thought that having Japanese composer Joe Hisaishi write the score takes some of the curse off that. Still, given the extreme nationalism that we find in a lot of mainland Chinese commercial cinema these days, we should be grateful for any evidence of restraint: and this is a beautifully restrained portrait of heroism under pressure, all the way to its surprising ending. 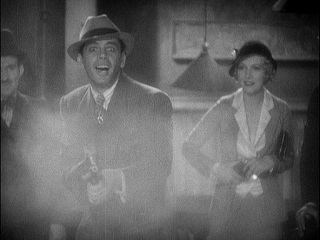 MIKE LEIGH KLAXON. [spends the next sixteen weeks in a workshop with Timothy Spall trying to decide what a Mike Leigh klaxon sounds like] Leigh is a regular visitor to the LFF whether he's got a film screening there or not, and it's always a pleasure to see him in the audience for a movie. This particular screening has the bonus of an introduction by Geoff Andrew, bringing back fond memories of the days when London used to have a magazine called Time Out and he used to edit the film section. He's as thoughtful and informative as ever, though I'd suggest that next time he goes to the barber's he shouldn't take a photo of Larry David in with him.

As Andrew feels the need to point out (as if any of us in the room thought otherwise), this isn't Brian de Palma's Scarface, but Howard Hawks' 1932 original. Paul Muni plays Tony Camonte, who starts the film as the bodyguard of Chicago crime boss Louis Costillo. After making a deal with rival boss Johnny Lovo (Osgood Perkins), Tony has a new employer and Costillo has a gutful of lead. Tony becomes one of Lovo's most trusted men, and grabs everything he can on his way to the top, including Lovo's girlfriend Poppy (Karen Morley). Maybe that trust was a little misplaced.

Geoff Andrew's introduction pointed up one of the key motifs in the film - the appearance of a cross somewhere in the shot just before someone gets whacked - and the suitably primed audience chuckles smugly in all the right places here. But even discounting that, there's a lot of impressive visual stuff going on for a 1932 movie: Hawks' camera is incredibly mobile, occasionally flying through the walls of the set if the situation demands it, and it gives a feeling of breakneck velocity to the film. The rat-a-tat pace of the dialogue has a similar effect, with lots of blackly funny jokes and the occasional mumbled line that goes by so fast you can't be quite sure if they snuck some cussing in there or not. And, as ever, there are all the joys of a Hollywood movie made prior to the introduction of the Hays Code, with the added challenge of spotting the moralising scenes tacked on late in production to try and persuade audiences that Crime Does Not Pay. Given how well-loved this movie is eighty-odd years later, I don't think those scenes deglamourised gangsters quite as much as they'd hoped. 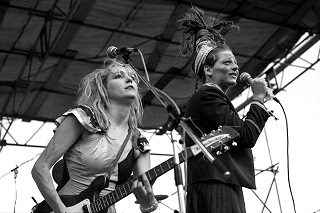 The fine tradition of Saturday night music documentaries continues with this history of the Slits, the first all-girl punk band. I kind of rediscovered them for myself a couple of years ago, after reading Viv Albertine's terrific memoir Clothes Music Boys, and digging out Cut on Spotify to find it holds up remarkably well nowadays. Back in their heyday, though, I knew the name but didn't really know their music - probably because women's music which didn't fit the girly pop template was roundly ignored by the media, which is kind of why we need a documentary like this now.

Albertine is interviewed for this film, so we get to hear her side of the story once more: but the bulk of the movie centres around Tessa Pollitt, who was in the band almost the longest (apart from singer Ari Up) and has effectively become their unofficial historian. Her scrapbook takes us through the early forms of the band, starting with drummer Palmolive and going through a few lineup changes: the tour with the Clash, coming after the band had only been around a few weeks: the increasingly experimental records, released to increasing public indifference: and then the split, the hiatus, the unexpected reunion and the tragic aftermath.

For anyone familiar with the Slits story, knowing the final chapter of it casts a bit of a pall over the rest. But part of the skill of the film is its ability to emphasise the positives: the hugely trailblazing role the band took on, the fear they used to strike in men everywhere (from musicians to roadies), and the generally hilarious chaos that ensued in their wake. Plus, of course, the cracking songs.

The interviews cover pretty much everyone who could be interviewed, and combine with the copious archive footage (once again, Don Letts' Super 8 films prove themselves invaluable to any late 70s rockumentary maker) to give a decent picture of the band's music and their impact. The Q&A afterwards becomes an entertaining shambles, as it turns out that the audience is made up of either gushing fans who want to be the band's mates, or total legends who really are their mates (Spizz Energi and Dennis Bovell being the main examples of the latter). Still, when a defunct band still inspires this degree of loyalty nearly four decades after their peak, they must have been doing something right.