Reviewed today: Blade Of The Immortal, King Of Peking, Mutafukaz. 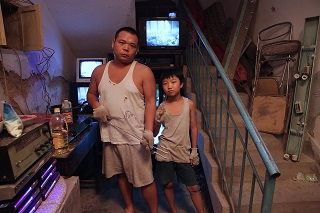 It turns out that the links run even deeper than that: when Red Light Revolution was released on DVD in the UK by Terracotta's own label, bootleg copies were being sold on the streets of Beijing in a matter of days, and this was what initially inspired Voutas to write the new film. Set in the 1990s, it tells the story of a father and son team, who have a nice little business showing movies to the locals: Big Wong (Jun Zhao) obtains the prints and runs the projector, while Little Wong runs around the streets to attract an audience. When their projector blows up, at the same time as Big Wong's ex-wife starts divorce proceedings, the pair need a new source of income, and fast. The chance discovery of a prototype DVD recorder in a second-hand shop gives Big Wong an idea: he takes a janitorial job at a nearby cinema, and pretty soon all of its current releases are becoming available on DVD, with Chinese dubbing and home-made covers as necessary. (The 1990s setting is necessary for the technology to be believable, but it also has the fringe benefit of allowing us to see Big Wong painting the poster for a film apparently titled Lots In Space.)

Film festival audiences always like films about fellow cinephiles, and part of what makes the Wongs so sympathetic despite everything is that their piracy is driven by a palpable love of the movies. But thankfully, these characters aren't just a collection of movie references, there's a lot more going on underneath. Big Wong's story is particularly poignant: he gets into the business initially because he doesn't want to lose custody of his son, but as he gets deeper into the mechanics of the trade he starts neglecting Little Wong more and more. For me, there's also the nostalgic bonus of seeing 1990s Beijing recreated on screen, given that this was roughly the period when I visited the city for the first time - the old-fashioned cinema with its hand-painted posters is particularly lovely. There's a huge amount of charm to this film, whether you're as obsessed with film as the Wongs or not, and it's an entertaining story that could easily please audiences anywhere in the world. Hopefully it'll get a wide enough release for that to happen. Mind you, it's a bit of a jolt when Voutas points out in the Q&A how much the film industry has changed in the six years since Red Light Revolution: given the way streaming has taken off, there probably won't be DVDs of King Of Peking for anyone to pirate... 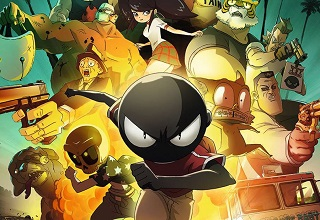 For quite a bit of yesterday, before we went to see Abracadabra, The Belated Birthday Girl had the Steve Miliband song of the same name stuck in her head. So you can imagine her delight when we got to see the film and that actual song appeared halfway through it. In a similar vein, this is the song I've had stuck in my head today. It doesn't appear in the film, though.

We're in Dark Meat City, California: a stereotypical cluster of ghettos and gang wars, also inhabited by three characters with ridiculously shaped heads. Angelino and Vinz are sharing an apartment together, mostly taking short term dead end jobs or hanging out with their mate Willy. Lino feels he doesn't have a purpose in life: but when lots of mysterious men in black start chasing after him with guns and worse, he starts to realise that may not be entirely true.

Remember how yesterday, during the programme of British animation, someone suggested that it's hard to label an animated film as being specifically British nowadays? Well, maybe it's a global thing, and the nationality of an animated film has become totally fluid. After all, this is a movie based on a French comic, set in America, and made by Japanese animators. The comic was originally made by Guillaume 'Run' Reynard, and he's co-credited as director alongside Shojiro Nishimi: between them, they've come up with something that feels like a hip-hop update of Akira, as a couple of teenage street punks slowly discover that they're part of something potentially apocalyptic.

The blend of styles works beautifully, mixing the visual flair of anime with a very French approach to telling its story. There are plenty of gags (the cockroaches that infest Lino and Vinz's apartment are the most delightful vermin you'll see all year), and the action sequences are clear and dynamically staged. And if you ever wanted to hear the best ever conspiracy theory regarding global warming, this is where you need to be. All the disparate elements cohere into a surprisingly entertaining whole, leaving me with just one minor qualm: given, you know, the title of the film, why is every 'fuck' in the subtitles censored? 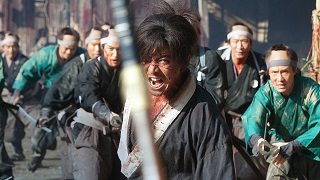 "Just think," I say to The BBG as we go in search of our main meal of the day in between King Of Peking and Mutafukaz, "Takashi Miike could be walking these very streets right now." And it's true: twenty years after his first LFF screening with The Bird People In China, and seventeen years after the first film of his I ever saw here (Dead Or Alive), Miike is finally in town. He's here for the Gala screening of Blade Of The Immortal, the 100th film he's directed. We don't do many Gala screenings outside of the silent film ones these days, but in this case The BBG and I have to make an exception.

The more observant of you will have spotted the irony: we're paying twenty-one quid to watch a film we've already seen in Japan five months ago. But you'll also be aware that when I've watched an unsubtitled film for Monoglot Movie Club, I always enjoy going back to it with subtitles later on to see what I missed. In this case, some of the details I didn't get are quite small - for example, the first time that a young girl dies while in the care of Manji (Takuya Kimura), it's actually his little sister. Some of the things I missed, on the other hand, are quite fundamental to the film. In my original review, I complained that there's very little suspense when your hero has been made immortal in the pre-credits sequence. Now I realise that part way through, Manji is attacked with a poison that wrecks his healing ability, and it's never quite the same after that.

On a more general level, being able to understand what's going on in the dialogue scenes stops the film from feeling like an episodic collection of swordfights, which is how I experienced it first time round. There's real depth given to the drama by the discussions between Manji and his new charge Rin (Hana Sugisaki) about the futility of seeking revenge: and the disputes between rival sword schools that ultimately lead to all this bloodshed are much clearer (or, if I'm honest, are actually apparent). Aside from all that, all the stuff I enjoyed on my first viewing is just as ridiculously thrilling on a second, but the extra detail helps you appreciate it even more.

And on top of all of this, we have Miike himself on stage topping and tailing the event. His insistence at the start that it's a film about kindness rather than violence is met with stifled giggles by the audience, but hopefully by the end they realise that this isn't as ridiculous as it sounds. (We could compromise and say it's a film about kindness and violence in equal measures, perhaps.) As for the post-film Q&A, it's notable for his detailed and thoughtful answers to everyone's queries (aided by one of the BFI's excellent translation staff, whose name I unfortunately didn't catch). At the very least, we get a definitive answer to the question we've all been asking ourselves: how on earth has he managed to direct one hundred films in just over two decades? "I've got a twin brother, I've really only made fifty films." Sounds legit.