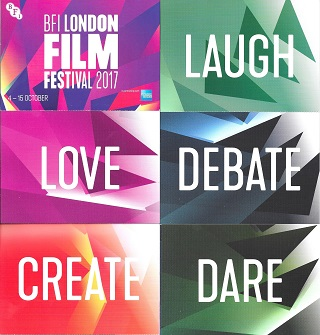 As noted elsewhere, I saw a total of 39 things at the 2017 London Film Festival. And using the now-infamous programme category system (this year commemorated with a set of free postcards), here's how they break down:

So, apparently, the sort of things I like best are "films to transport you and shift your perspective," a description so woolly they didn't even make a postcard for it. As for which individual films were the best and worst, I'll tell you that in a few paragraphs time. First up, though, here's The Belated Birthday Girl to tell you about what she liked. Including a spectacular video bonus!

Bubbling under: Blade of the Immortal, Five Fingers for Marseilles, Here to be Heard: The Story of the Slits

Another strong festival. 28 events attended – slightly fewer than the past few years, as I didn’t take much time off work, but a higher daily hit rate kept the total close to last year’s 30. Of those 28, nothing I would actually call bad, although Memoir of a Murderer was a bit daft in its plot, to be honest, and Funny Cow, though featuring a terrific central performance, didn’t do anything interesting enough to justify its existence and the “period” humour it required to tell its unoriginal story.

The final day gave me both my top and bottom films of this year’s festival. I’ve liked Lynne Ramsay’s work since Morvern Callar, and You Were Never Really Here was another complex and satisfying film from her, featuring one hell of a performance from Joachim Phoenix, sustaining the film in nearly every scene. Another thing I noted is that all of my top 3 films leave a lot to the viewer’s interpretation. I know that’s not to everyone’s taste, and certainly in the Q&A for Rift there was one audience member who seemed not only to want the film to spell everything out for him, but as the director was there, wanted him to give a personal explanation of every point he’s missed. But in all 3 cases, the film worked for me, and I was happy to come away with things to work out for myself.

Of the “bubbling under” films, it’s possible the Miike would have made it into the Top 5 if this was a first viewing, but as we’d already seen it in Japan, I was happy for it to give a spot to another film. Seeing Miike in person, both at the screening and at the Screen Talk, was a definite highlight for me, fan-girl that I have been for many years now. I do think the questions at the Screen Talk could have been more insightful, but in any case it was a pleasure to be there, and Miike’s answers gave plenty of insight. Of the archive films I enjoyed most, I’d never seen the Howard Hawks Scarface before, and thoroughly enjoyed it. Whereas I have seen A Matter of Life And Death many times, and on the big screen before, too, but it’s always a pleasure to see it again.

One other tiny mention is that it was good to see an adult animation programme again, in From Jealous Dolls to Brutish Bulldogs. It didn’t come high enough up on my list compared to the many really good films I saw to make it onto the lists above, but I just enjoyed the fact that it was there. Now let’s have a proper animation programme back next year, and I’ll be even happier. 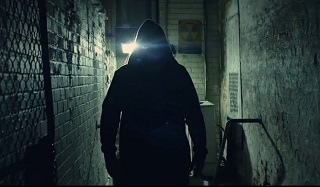 You know how these things work by now: The BBG and I may swap our thoughts about LFF films at any time after we've seen them, but when it comes to compiling our final lists we do that independently. Still, in what I'd agree was a solid year for the festival, it's nice to see that we both think that You Were Never Really Here was the best film. Two weeks have elapsed since that Sunday morning screening where Lynne Ramsay did a runner rather than hanging around for a Q&A, but on reflection she was probably right: in the immediate aftermath of watching that straight after breakfast, I don't think anyone in the shellshocked audience could have strung a coherent sentence together. Incredibly powerful stuff, and I'm looking forward to revisiting it at a more suitable time of day.

I don't think I can really go as far as a top five list, but I'm pretty sure that my second and third favourites are both documentaries. AlphaGo works wonderfully as both a sports movie and a tech demonstration, although as far as the latter goes it's been overtaken by events since the LFF screening (see this article, but be warned it briefly discusses what happens in the movie). Meanwhile, 78/52 - in cinemas and on demand any day now - is just ridiculously watchable, wearing its film geekery lightly on its sleeve as it pulls apart one of the most famous sequences in cinema, remaining incredibly entertaining as it does so. I'll also throw in honourable mentions for four terrific films that all hover just outside that top three: Good Manners, A Fantastic Woman, Ex Libris and Wrath Of Silence.

I'd agree with The BBG that we didn't really see anything bad this year, and that Funny Cow was the closest we had to an outright stinker - even then, the performances are good enough to rise above the problems with the script. There are two other films which are more guilty of not living up to my expectations, rather than being actively bad: On The Beach At Night Alone and Let The Corpses Tan. The BBG didn't join me for either of those, so she has every right to feel smug about her choices.

And that's us all done for another year. Huge thanks as ever to The Belated Birthday Girl for her additional reporting: slightly smaller thanks to the Pals who joined us at various times for various films - Bill, Caroline, Chris, Jon, Lesley, Peter, Caroline, Stephen and Victoria (although some of them couldn't be there for as much of the festival as they would have wanted). Next year, if all goes well, it'll be the thirtieth one of these things I've attended. Maybe they'll put me in the LFF artwork to celebrate that anniversary. Being a monkey, and all.