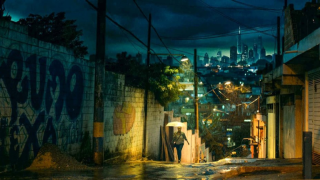 It's always a problem when you're writing about new films: how much of the plot do you reveal? See, you're already suspicious now, just because I'm talking about something in this film that I want to avoid talking about. Michael Blyth is completely upfront about this in his programme listing for Good Manners, suggesting "the more unexpected a film, the less one should know in advance." To be honest, that was enough of a hook to attract me to this screening.

Of course, there are downsides to this approach: the BFI have now had to put a specific content warning up at the door of the Embankment Cinema, to legally cover their arses for people who don't know exactly what they've signed up for. Sadly, I'm not one of those people. A couple of days ago, I did a Web search for a link to go at the top of this review, and found a YouTube trailer featuring a two-word description of the film in its title, where one of those words is the one that Blyth's been trying not to reveal. Bah. (The trailer I've linked to above is a different one: it doesn't explicitly blow the gaff, but does drop some entertaining clues.)

So, anyway. Juliana Rojas and Marco Dutra's film takes place in a beautifully stylised version of São Paulo, where the gaps between the rich and poor areas have been exaggerated by the use of matte paintings. (Click on the picture above for an enlarged example of what I mean.) Clara (Isabél Zuaa) comes from the poor part of the city, and is desperate for a job: Ana (Marjorie Estiano) is a rich girl in a fancy apartment needing someone to look after her through her ongoing pregnancy. Initially, the two women seem almost completely incompatible, but their relationship will go through many changes as time goes on.

Part of the charm of Good Manners is, predictably, its unpredictability - and thankfully, that one-word spoiler I encountered barely scratches the surface of the direction this story takes. But it's about so much more than that. As befits a story that's been described in some places as a modern fairy tale, it's shot in an extraordinarily surreal way, using old-fashioned means to achieve its distinctive look rather than reaching straight for the CGI (the use of matte paintings is just one example). It's a story that goes through a number of sudden changes in gear (even becoming a musical occasionally), but the cast is good enough to keep the whole thing grounded no matter how odd things get. Once you've worked out where Good Manners is heading - and, more importantly, after that - it'll keep you gripped all the way up to literally the last frame. 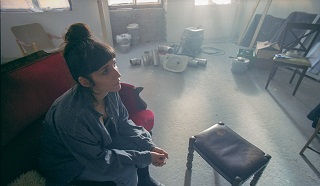 Welcome to the single most discreet event in this year's LFF programme. It's not listed in the printed copy: it's not been included in the list of programme changes: the only way you'll find out about it is by either walking past it by accident while you're in BFI Southbank, or finding the relevant page on the LFF site. (Or reading about it here, I suppose.)

It's an event linked to something that is advertised in the printed programme: a talk given earlier this week by Johan Knattrup Jensen, a Danish pioneer in virtual reality. Originally, the plan was just for some of his VR work to be on display for the rest of the evening after his talk. Now, apparently as an afterthought, the little alcove next to the Mediatheque in BFI Southbank (which they've been trying to use as a refreshment stall with little success) has been converted into the LFF's first ever virtual reality screening area. Throughout the festival, a ten minute installation called Mother's Ghost is showing there to one person at a time, for free. (It's open from 10am to 10pm every day till the festival ends on Sunday.)

Without the visual gimmick, this is a fairly traditional short film, told in an elliptical style: a vignette about a couple expecting a baby, and how a decision is reached. What VR does is allow Jensen to present the story from several different first-person perspectives, which is an interesting application of the technology. My only previous experience with VR has been the Bjork Digital exhibition last year: by comparison, the VR here is a bit less technically impressive, with nothing like the full 360 degree view available. It's also hindered by the headphones not being good enough to cut out the sound of your next film being announced over the Tannoy.

But there's one obvious difference between this and the Bjork videos: this is my first experience of VR being used to tell a story. And there are certainly a couple of places where the forced first-person perspective does very odd things to your head. For me, the strangest moment comes when I look downwards and realise I'm a heavily pregnant woman (although in my particular case, that's made even freakier by the depiction of pregnancy that I've just seen in Good Manners). It's still hard to see VR currently as anything other than a gimmick, but experiments in narrative cinema like this are presumably what could ultimately take it to the next level. There's still quite a way to go, though. 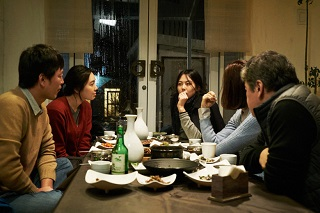 It's that Hong Sang-soo time of the festival again: the Korean director whose name I almost instinctively have to sing to the tune of Song Sung Blue whenever I read it. (See also: Aung San Suu Kyi and Manhattan Transfer's Chanson d'Amour, which means that even if I'm reading about her complicity in the Rohingyan genocide, I always follow her name with 'rrrrrrrrat da-dat da-dat'.)

Anyway, Hong's made his film again: the one about the ageing film director going through a personal crisis, and the dinner where someone gets drunk on soju and makes a terrible scene. These days, Hong likes to mix in a bit of overseas shooting as well, so this particular version starts with actress Younghee (Kim Minhee) hiding out in Hamburg in the aftermath of her failed affair with a director. On her return home to Gangneung, Younghee gets together with some old friends, reflects on what she learned during her time abroad, and tries to decide what to do next with her life.

All of the tropes we associate with Hong are present and correct: the wobbles in the timeline, the long scenes shot in a single take, the mirroring of motifs across the two halves of the film, the knowing ellipses in the narrative. If there's anything new in here, it's the tiny burst of non-realism introduced by one particular character - other than that, it's business as usual. It's watchable enough in its own right, but far too similar to what the director's done before. I'll have to see if I'm ready to give him another shot this time next year.