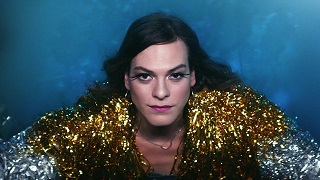 Transgender: it's the new black. At the very least, it's currently the social grouping that seems to be the most acceptable target for discrimination. Which makes it all the more reason for this year's LFF Flare Special Presentation to feature this film from Chile. Flare, for those of you who don't know, Flare is the BFI's annual festival of LGBT cinema, and this is very much a story about the T.

For the first reel or so, A Fantastic Woman is a rather touching romance between the older Orlando (Francisco Reyes) and Marina (Daniela Vega), a trans woman half his age. They spend an evening out together, they celebrate Marina's birthday, they go home, it's all rather lovely. And then Orlando suddenly dies, and everything goes sour for Marina. Orlando's ex-wife and son try to erase her from his history, keeping her out of the funeral arrangements and accusing her of trying to steal his stuff. Meanwhile, the police are prying ruthlessly into Marina and Orlando's private life, assuming that there's been abuse in one direction or the other.

It comes as a bit of a shock in the post-screening Q&A to learn that when co-writer Gonzalo Maza started work on the script with director Sebastián Lelio, Marina wasn't trans: it began as a much more traditional story of a dead man's old family and their clash with his new girlfriend. It wasn't until later in the development process that the additional complication of the girlfriend's sexuality was included - Vega was one of the trans people the writers consulted for research, and they were impressed enough to offer her the lead role. Having learned all that, I feel a little uneasy about the way she's used in the film, as if she's just a gimmick to crank up the melodrama a little more. If that was solely the case, then we've not moved on much further from... well, I won't say in case I spoil a 25 year old film for you.

Having said that, there is a big move forward in that the trans character is at the centre of the story, rather than just being a secondary one in someone else's film. Lelio and Maza handle the way we're introduced to Marina very sensitively: a lot of time is devoted to showing us the loving relationship between Marina and Orlando, and we're a number of scenes into the film before anyone on screen suggests that it's at all unconventional. From that point on it's entirely Marina's story, and we're with her all the way: we see her as a person first and trans second, which is entirely the opposite of the way most people in the story react. So when, for example, Orlando's ex-wife aggressively calls Marina by her pre-transition name, it's a genuinely shocking moment. Vega's performance is the key to everything in what would otherwise have been a fairly standard melodrama: she makes us feel every injustice done to her, and keeps the audience hooked all the way to the end. 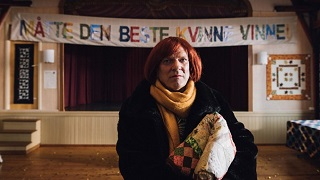 I think that last year's five-city Nordic Expedition - and in particular, the movie part of it - has made me more predisposed to Scandinavian cinema generally. Certainly, when going through this year's LFF programme to make my choices, I spent a little more time than in previous years reading the entries for Scandi films. But here's an odd thing: the LFF programming team seems determined to sell the idea of Scandinavian cinema as being dark, edgy and outrageous. The programme listing for the Danish Word Of God plays up its black comedy elements to the hilt, without mentioning the sensitive family portrait behind the gags. Similarly, this film from Norway is reduced to a telegrammatic tagline - 'Mum’s gone. Work’s gone tits up. Dad’s got his dress on. It’s time to hit the road.' - that doesn't really represent what the film's actually about.

Writer/director Henrik Martin Dahlsbakken tells the story of a father and son, mourning the loss of a mother. The son Kaspar (Benjamin Helstad) is hitting the bottle to the extent that he's lost his job: the father Georg (Ingar Helge Gimle) is sitting at home all day feeling miserable. Kaspar decides this can't be good for either of them, and they need to get out of the house: the chance to present his late mother's quilt at a competition on the other side of the country gives them their excuse. It means that Georg will have to go public with his newly-acquired (or is it?) taste for wearing women's clothes, but if anything that turns out to be the least of their problems.

Aside from the minor quirk of Georg's transvestism, this is a fairly standard road movie, which at least has velocity in its favour - the whole story is wrapped up in a tight eighty minutes. Kaspar and Georg travel around, they meet people, they sometimes hang out with those people, and sometimes those people choose to hang out with them: and that's basically it. It's a gentle comedy with quite a bit of charm, and one or two surprising left turns in the journey: I'd be perfectly happy stumbling across it for Monoglot Movie Club, but it seems a little slight for inclusion in an international film festival. 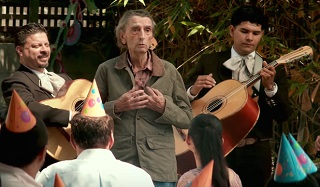 As I said yesterday, films change over time, and are changed by the historical events that occur around them. The Venerable W. has taken on a different tone now that its warnings about genocide in Burma have become fact. Similarly, when Lucky was originally added to the festival, I'm sure it was because they liked the idea of programming a late period Harry Dean Stanton film, not realising that it was going to be his last one.

A plot summary would be sort of meaningless here: this is really a vehicle for a character actor doing one final turn. Harry Dean plays Lucky, a 90-year-old man who works to a precise schedule - exercise and cigarettes at breakfast, coffee and a crossword at the diner, back home to catch his shows, and a bloody Mary at his local bar before bed. Early on, it looks like the film's going to be structured around the repetition of his daily routine, like Paterson was last year. But when Lucky keels over shortly after breakfast one morning, he starts to realise that one way or another, his routine is going to change.

Lucky's like a road movie played over a very small stretch of road. Like Going West earlier, it's really about Lucky's interactions with his friends and the people he meets, and less about having a coherent end-to-end story: in fact, it doesn't really have an end, more a couple of callbacks to things that happened earlier. Even when it's just Stanton on screen, though, he's a joy to watch: as with his recent appearances in Twin Peaks, some of the most spellbinding sequences involve the character alone just observing his surroundings.

Does the film work as a victory lap for a great actor? To be honest, it's hard to see it any other way. Particularly after the post-screening Q&A, which was originally scheduled to involve director John Carroll Lynch but instead features co-writer Logan Sparks. It turns out the film was Sparks' idea in the first place - he worked as Stanton's personal assistant for the last 15 years of his life, and he wrote the script for the retired actor as a tribute, including in it several incidents and conversations from their time together. Effectively, it's a film that celebrates an actor's life without being a documentary portrait, using Lucky as a fictionalised version of Stanton. It's a nice idea, but it's hard to shake off the thought of a man's life being strip-mined for script material in his final years. It's possibly that degree of calculation that stopped me from really engaging with the film emotionally: I was expecting to be in tears by the end of it, but that didn't happen. Whatever - it's a glorious final performance by one of the best movie actors, and that's more than reason enough to see Lucky.