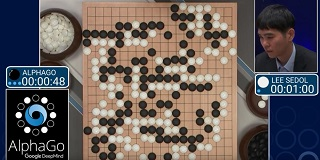 More documentaries! Although given that the end titles of this first one state that its copyright is owned by the company it's about, we might want to be cautious about assuming impartiality.

The company in question is DeepMind, a British subsidiary of Google specialising in artificial intelligence. Back when I had my first Moderately Responsible Job In The Computer Industry, the key gimmicky measure of AI's power was how effectively a computer could play chess against a human master. But DeepMind's co-founder Demis Hassibis says the real challenge is to come up with a computer that can play Go - a game with very simple rules (thankfully explained in the film) but with more possible play permutations than there are atoms in the universe.

People get very mystical when they talk about Go - one player says that when you reach a certain level "it's like putting your hand on the third rail of the universe." Can a program achieve the same degree of intuitive play as a person? Hassabis and his team develop AlphaGo so they can find out, and they give it its first public test against European champion Fan Hui. AlphaGo positively hammers him, but he's humble enough and intrigued enough to join the developers as an adviser. The big challenge will be to pit AlphaGo against one of the world leaders in the game, which is where Lee Sedol from Korea comes in.

It may be a slab of Google propaganda at heart, but there's so much going on inside Greg Kohs' film that you can easily overlook that aspect. At the heart of the movie is the five-game tournament between AlphaGo and Lee Sedol, which is filmed with all the tension of a life-or-death sporting match. We see the games from the perspective of several observers - the live commentators (the Korean ones are incredibly enthusiastic), Fan Hui (sitting on the sidelines as one of the referees), and the backstage DeepMind team (who frequently don't understand what's going on, as they're no good at the game themselves).

That last point leads to all the other layers of the documentary, which take it above a simple man vs machine tussle. Unlike, say, Deep Blue, which had all its possible moves programmed in by chess experts, AlphaGo is learning - it's analysed the play from hundreds of thousands of human-played matches, and adds to its strategies every time it plays another one. It doesn't play like a human, who would be constantly aiming to maximise their score in a game: AlphaGo just plays to win, even if it only eventually wins by one point. The more philosophical Go players think AI could reveal levels of the game previously undreamed of by human intelligence. Meanwhile, the ones actually playing the program end up going through deep existential crises, unable to fathom whether the machine has made a mistake or has a strategy planned for 60 moves down the line.

As a result, AlphaGo the film throws around some deep philosophical questions, which culminate in the big one: who do you root for in the match? DeepMind, because they're expanding the limits of what people can do? Or Lee Sedol, because you don't want SkyNet to be brought online just yet? Either way, all these questions integrate seamlessly with the footage of the big match into a terrific film, where the tension of the game sequences is surprisingly unaffected by how little you understand what the hell's going on. 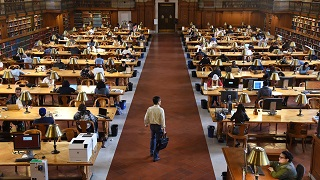 From Spank's LFF Diary, Sunday 9th October 2016: "[Frederick Wiseman's] next project is a study of the New York Public Library: I suspect it'll be at LFF 2017, and I suspect we'll be there for it, no matter how many hours long it is." Never let it be said that I don't keep my promises. (And it's three and a quarter hours, in case you were wondering.)

This is another documentary in the Wiseman style: a fly-on-the-wall portrait of an institution's public and private faces, told without the use of narrative captions or voiceover. Given the focus on a library, I'd naively assumed that most of what we'd hear would just be people going "ssshh." Of course, that isn't the case, because libraries are changing. Over the three months that Wiseman shot in late 2015, there are a number of staff meetings that cover two major issues: how to allocate the combination of private and public funding they receive, and how to move into the digital arena when 30% of New York residents have no broadband access at home. (They also look at the age-old problem faced by librarians of what to do with homeless people who fall asleep in the library.)

The digital question, and for that matter the issue of homeless sleepers, both relate to the transition of the library from being a room full of books to a one-stop community resource. We see some of the many events put on for visitors: concerts, interviews with the likes of Richard Dawkins and Elvis Costello, reading groups, job fairs and lectures. (There's a particularly alarming example of the latter covering the history of the New York Jewish deli, where the lecturer draws disturbing parallels between the overstuffed pastrami sandwich and the female genitals.)

We also see several examples of the library's community outreach work, including the loan of free mobile hotspots to those data-poor citizens I mentioned earlier. And we get to venture away from the main Manhattan library building to some of the smaller local branches, using Wiseman's trademark transition sequences in which half a dozen shots track our movement between the first location and the second.

As I said, it's a portrait that lasts three and a quarter hours, edited down from 150 hours of raw footage. And to be honest, there's so much going on in here that I could have coped with it being longer. As ever, Wiseman finds a terrific mix of people to hang out with, and the fact that they all seem to be doing their job successfully makes this a real pleasure to watch. (Whether the film would be as inspiring if it was made now, in the wake of Trump's cuts to public services, is another matter entirely.) If I lived in New York, this film would make me want to hang out at the library all the time: that may not necessarily have been the aim of Wiseman's film, but it works just fine on that score too.