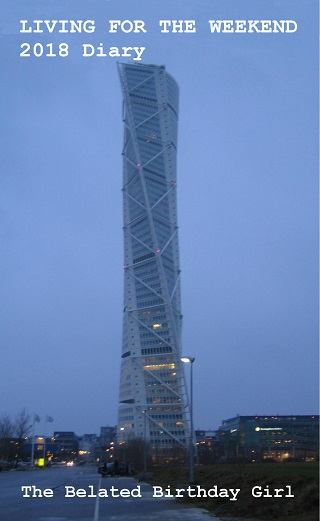 The feature list for the Living For The Weekend 2018 Diary is much the same as it has been in previous years. It's a 120 page perfect bound softback book, featuring a two-page spread for every week, calendars, notes pages, and a space to glue in the local travel map of your choice to get around pesky copyright laws. As well as that, there's also a pair of pages dedicated to your project for the year. I've just realised that we've never really got around to talking about how the last couple of projects went, so a quick summary follows.

Our 2016 project was beer related, much like the first one was in 2013. That one involved visiting BrewDog bars, and has kind of morphed into an ongoing thing. This one cast its net a little wider: the plan for 2016 was to visit twelve brewery tap bars, giving us an excuse to visit lots of the small breweries that have sprung up across the world over the past few years. We managed to get to twelve without breaking a sweat, and still managed to squeeze in a thirteenth one just before Christmas, calling into Stone during our few days in Berlin.

(A quick note on our biggest failure of the 2016 project: London Fields Brewery, London Fields. We visited it, drank some beers there, and even went on its brewery tour. However, in the days leading up to our visit we found out about the sordid past of the brewery's boss and how it was responsible for its current problems. This made it the only brewery tap of the project that was situated on a brewery which wasn't able to brew any beer on its premises. These days, it looks like the boss is more or less in the clear: meanwhile, in a development which may or not be related, London Fields has sold its soul to Carlsberg.)

2017's project was a more ambitious proposition: to visit twelve restaurants serving foreign cuisines we hadn't eaten before. Living in London certainly helps with that one, but it takes a huge amount of research to track these places down: that, plus a fatal drop in our momentum between April and August, meant that we only managed to visit ten in the end. Still, I think that's pretty good going.

(A quick note on our biggest failure of the 2017 project: HaruKor, Tokyo. Doing the research for our 2017 trip to Japan, we found we had an unmissable opportunity while in Tokyo to visit one of the few restaurants dedicated to Ainu cuisine, the food of the indigenous people of Hokkaido in the north. Remember that whole business about how we timed our Japan visit to come after the Golden Week holiday, only to discover that many of the places we wanted to visit had stayed open for the holiday but closed for a few days immediately after it? Well, HaruKor was one of those: and thanks to their skimpy online presence, we didn't find this out until we were literally outside its door reading the 'closed for the holidays' sign.)

The project for 2018 should be a little easier to achieve. Both The BBG and I have been to our share of music gigs in the past, but it struck us recently that we'd seen very few during 2017. (For the record: Jaga Jazzist, Happy Daggers, Cousteaux, Herbie Hancock, John Cooper Clarke, The Men That Will Not Be Blamed For Nothing.) Is this due to music getting worse, or the ever-more-frequent closure of venues, or just us getting old? Whatever it is, she's decided we need to do something about it, so we've vowed to go to at least twelve in 2018, and document them in the relevant space at the back of the diary.

Want to join us? Then buy yourself a copy of Living For The Weekend 2018 Diary now. You won't regret it. Much.