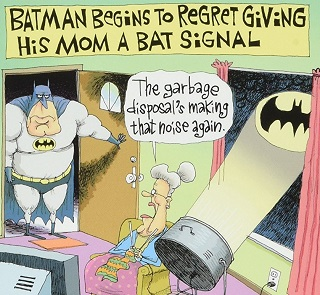 True story. About twenty-odd years ago, my young nephew had three favourite action figures. The first was Batman: with his lumpy grey suit and navy blue cowl, he was obviously based on the 1966 TV version, and presumably some sort of family heirloom. The second was Batman: all in black, a sculpted torso replacing the middle-aged spread, looking more like Michael Keaton did in the 1989 film. The third was, well, Batman: the square jaw and cartoonish features marked him out as being the one from The Animated Series, the version my nephew was most familiar with at the time. And I'd watch in fascination as he'd wrangle all three of them into play scenarios that would frequently end with them having a big fight.

In a way, that's kind of what we're doing on MostlyFilm today, as we continue the site's farewell run of posts. #NotAllBatmen features five of us each picking one depiction of the Caped Crusader - the three discussed above in action figure form, plus the one currently on telly in Gotham, and me looking at one of his DTV animated incarnations - and comparing them against each other. No big fight at the end of this one, unfortunately: the best I can do in this Red Button Bonus Content page is show you a bunch of trailers featuring each of our Batmen.

Here are the five we've written about: