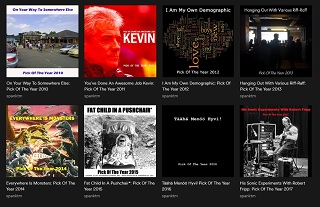 The fourth and final part of this feature will be structured in the same way as the other three, except that I'll need to return to it in two years to wrap up the decade. Once again, I've taken the Pick Of The Year CD compilations I've been creating every year, and attempted to recreate them as Spotify playlists. You'd assume that as Spotify's been running since 2008, pretty much every record released this decade would be on there, but you'd be wrong. The gaps on these last few playlists tend to fall into three categories: limited web-only releases via sites like Bandcamp, music from foreign parts (though Japan seems to have embraced international releasing for its bigger artists), and acts who've simply decided that streaming isn't something they want to do.

As always, I've noted the omissions for each year, and included links to the original discussions of the tracks. The more alert of you may have realised that the playlists for 2014-2016 have been around for a while, and were set up specifically for MostlyFilm's end-of-year roundups. The others, though, have been set up specifically for this page. Happy streaming, or whatever it is that the kids would say.

2010: On Your Way To Somewhere Else.
We're missing three from this particular playlist. The Blur song was a limited edition vinyl release for Record Store Day, and at least we should be grateful that they also put out a free download for people who didn't pick up one of the thousand copies pressed. Vanilla Beans are one of those Japanese acts who aren't big enough to justify exposure outside their home country (although this changed a little recently: see discussion of the Noughties playlists for details). That leaves a track from the soundtrack of the film Gainsbourg, specifically Sara Forestier's unflattering impersonation of yé-yé singer France Gall. Given that Gall died in the week I'm writing this, maybe it's best that we listen to her original version rather than Forestier's triumph of enthusiasm over ability.

2012: I Am My Own Demographic.
Quite a few omissions on this playlist. Vanilla Beans still aren't on Spotify: Limited Express (Has Gone?) have the double whammy of being Japanese and releasing their best song for free on their website: The North Sea Scrolls is only streamable in the standard album version, not the special edition with the Scroll spoken word interludes. That leaves the mysterious case of The Chemical Brothers' Theme For Velodrome, which appears to have been completely deleted from all digital formats - you can't even buy the MP3 any more. I know it's a song that's specifically tied to the 2012 Olympics, but it seems odd that you can only hear it on YouTube video now.

2013: Hanging Out With Various Riff-Raff.
Two tracks missing, for what are by now predictable reasons. David Byrne and St Vincent gave away a free download EP just to members of their mailing list, which was nice. And despite a hefty international push a few years ago, Love Psychedelico aren't considered a big enough Japanese band to warrant an appearance on UK Spotify.

2014: Everywhere Is Monsters.
Another Japanese band you can't stream over here: the mighty Soil&"Pimp"Sessions. Well, they had a proper UK record deal for a few years, so their early work is streamable, but once that deal expired that seems to have been it. The odd thing is, their albums still get full day and date digital releases on iTunes, but not on Spotify.

2016: Täähä Menöö Hyvi!
Curiously, Kate Bush's Before The Dawn live album is the only one she's never made available for streaming, hence the non-appearance of King Of The Mountain here. As for Ylvis, despite all their international success a couple of years ago, they've made their subsequent songs almost impossible to get hold of unless you own a Norwegian credit card. Try it if you don't believe me.

2017: His Sonic Experiments With Robert Fripp.
And so we reach the present day, with two songs you could initially only buy at the artists' gigs. The Michael Legge track The Last Days was only released on 7" single and Bandcamp download, which is fair enough. But the live album by The Divine Comedy, Loose Canon, is an odd one: at the time of writing it's only available from merch stands and the band's online shop, but an Amazon listing seems to suggest that it's getting a proper release in February 2018. So does this mean the live version of To The Rescue will soon be on Spotify too? Scroll through the player below after February 16th and find out...