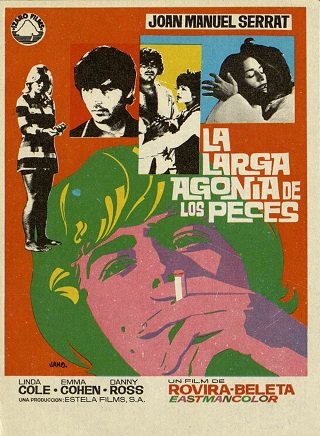 Well, that's that. As MostlyFilm continues to ride slowly into the sunset, we've just published what will be my final solo contribution to the site (though I'll pop up in two more collaborative pieces before the week's out). Monoglot Movie Club: Epitaph 1, contrary to what you may have read at the start of my Polish Netflix article, is a real finale to seven years of the feature. It's my one and only chance to run with an idea that I've been toying with since 2013 or thereabouts: take a few films that I've reviewed without subtitles for MMC, watch them again with subtitles, and see if it changes my opinion of them. I've picked seven films from more or less the entire run of the feature - for four of them I've been able to draw on second reviews written for these pages, while the other three have been rewatched specially for this piece. You'll have to read Epitaph 1 to see how all that turned out.

The final episode of MMC is, as ever, accompanied by Red Button Bonus Material on this site. I've always enjoyed the challenge of coming up with some sort of cross-promotional piece that'll back up the main article, whether it's just a simple collection of video trailers or a more detailed bit of text background. This one, however, is a little out of the ordinary.

At the top of the MostlyFilm piece is a map showing the 28 cities where I watched films for the series. What if I told you that really, it should have been 29 cities? And that there was a lost MMC film review that never made it to publication? And that you're going to get to see that previously unpublished review right now? Would that impress you? Would it?

Oh. Well, here it is anyway.

Thelma: OK, then, listen. Let's not get caught.
Louise: What are you talkin' about?
Thelma: Let's keep going!
Louise: What d'you mean?
Thelma: Go. [she nods ahead of them]
Louise: You sure?
Thelma: Yeah. Yeah.

After a wee false start a few weeks ago, we're finally driving MostlyFilm off the cliff edge as promised. And guess who's behind the steering wheel?

Before we start, a quick word from our sponsors - or, more accurately, from one of the main sponsors of the Japan Foundation Touring Film Programme 2018, (Un)true Colours: Secrets And Lies In Japanese Cinema. Each screening at the ICA in London was prefaced with an advert for Japan Airlines - Precision - that announced itself as being the first in a series called Art Of J. For those of us who were watching sixteen films in the space of ten days, after a while we found ourselves wishing that they'd show a couple of different ads in the series once in a while. Well, it turns out there are three in total, and you can see them all in that playlist over there. They're rather nicely done.

The ICA's London run of the JFTFP18 films has now ended, but the season continues across the country until the end of March. I reviewed eight of the films in Part 1, and now you get to hear what I thought of the other eight. (The 'Secrets' and 'Lies' division between the two post titles is completely arbitrary, by the way: I'm just reviewing them in the order I watched them.) 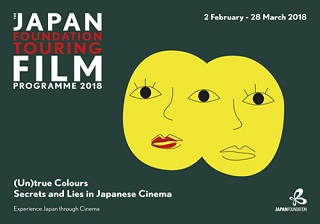 I'll be brutally honest with you: the things I'll miss most when MostlyFilm finally closes down are the freebies. We didn't get many of them, but they were highly appreciated: a press preview with drinks and nibbles here, an advance screener DVD there. For me, for the years 2012 to 2017, January was basically my Christmas: because the Japan Foundation had their annual Touring Film Programme to promote, and happily sent me ridiculous numbers of watermarked Japanese DVDs to watch and report on in a series of preview articles.

But now it's 2018, and MostlyFilm is on the verge of shutting up shop. (More on that in a couple of weeks.) We couldn't really justify trying to squeeze one last set of screeners out of the Japan Foundation. Nevertheless, even before 2012 I was regularly attending the programme under my own steam. That was never going to stop.

What I'm saying is, the Japan Foundation Touring Film Programme 2018 - titled (Un)true Colours: Secrets And Lies In Japanese Cinema - is touring the UK throughout February and March, starting off with a ten-day run in London. And I'm seeing all sixteen films during that run. I can't give you previews, but I can offer you reviews: eight now, and another eight in a week or so. That okay for you? 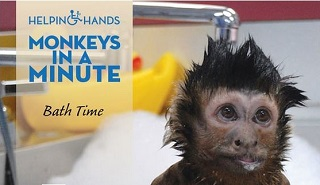 Internet: There was an interesting piece in last Saturday's Guardian about comedy double acts that split up. It got me thinking about how these days, most of the double act comedy I encounter is via podcasts. It all started, I think, with Collings and Herrin - by coincidence, today marks the tenth anniversary of the release of its first episode. There was always a comic imbalance between the two performers: Andrew Collins was the more serious one who gave the show structure, while Richard Herring provided the jokes and attempted to drive the thing off the rails at every possible opportunity. It's a formula that's been replicated several times in the last decade, from Michael Legge and James Hingley's Precious Little Podcast (so heavily influenced by C&H as to be unofficially dubbed Bollings and Nerrin) to sort-of-football podcast Athletico Mince (where the dynamic is tweaked to balance relatively funny bloke Andy Dawson against comedy god Bob Mortimer). The latest funnyman/straightishman podcast to hit the feeds is Poddin' On The Ritz, a shameless bit of promotion for the new production of Young Frankenstein that's running in London. It features West End song 'n' dance guy Hadley Fraser (who plays Frankenstein in the show) and impro comedy genius Ross Noble (who plays Igor): the two of them swap anecdotes about their respective showbiz worlds, and pull apart the plots of other musicals to highly amusing effect. Noble leaves the show in the middle of February, but they appear to have been recording these podcasts a couple of months in advance, so there should be a few more still to come. This should be the point where I give you a quick review of Young Frankenstein itself, but Music comes before Theatre in alphabetical order so you'll have to wait a little.

Music: In possibly the most predictable news you can imagine, congratulations to Dave for being the winner of the 2017 Pick Of The Year CD competition, again. You'll remember the question went as follows: When David Bowie sacked the Spiders from Mars, he needed another backing band. So who did he turn to? Where did he go? The answer, as given in the lyrics of the song David Bowie Was A Funny Man, is as follows: he ran for The Shadows. And I'm going to use that as an excuse to show you my favourite film clip of The Shadows. Shot in 1966, it defines the future grammar of the music video more than anything the Beatles ever did. Watch out for a surprise appearance from Bob Monkhouse, who'll make you laugh just with his use of the word 'junior'.

Theatre: So, as I was saying, we went to see Young Frankenstein at the Garrick Theatre last month. The background to the show is interesting: as you probably remember, Mel Brooks had a huge theatrical success on both sides of the Atlantic earlier last decade with the musical adaptation of his film The Producers. Assuming he could pull off the same trick twice, he produced a musical version of Young Frankenstein on Broadway in 2007, and it flopped badly. A decade later, he's rewritten the show, cutting some songs and adding some new ones: the adjustments seem to have worked, and it's doing rather nicely on the West End. To be honest, there are a lot of similarities with The Producers, with both shows pivoting on a show-stopping number taken straight from the film. In the case of The Producers, it's Springtime For Hitler, co-written with Brooks' regular score composer John Morris (who died this week): here, it's Puttin' On The Ritz, which of course Brooks nicked from Irving Berlin. By comparison, his own songs are fairly functional things that don't really stand out by themselves (although having Together Again as the podcast theme has helped that one stick in the memory). But it's the show overall that counts, and the mix of corny gags, old-fashioned musical craft and Broadway pizazz comes together rather delightfully.