Before we start, a quick word from our sponsors - or, more accurately, from one of the main sponsors of the Japan Foundation Touring Film Programme 2018, (Un)true Colours: Secrets And Lies In Japanese Cinema. Each screening at the ICA in London was prefaced with an advert for Japan Airlines - Precision - that announced itself as being the first in a series called Art Of J. For those of us who were watching sixteen films in the space of ten days, after a while we found ourselves wishing that they'd show a couple of different ads in the series once in a while. Well, it turns out there are three in total, and you can see them all in that playlist over there. They're rather nicely done.

The ICA's London run of the JFTFP18 films has now ended, but the season continues across the country until the end of March. I reviewed eight of the films in Part 1, and now you get to hear what I thought of the other eight. (The 'Secrets' and 'Lies' division between the two post titles is completely arbitrary, by the way: I'm just reviewing them in the order I watched them.) 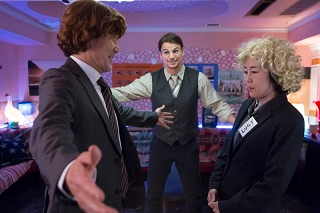 Oh Lucy! is an odd mixture of cultures, possibly reflecting the background of its director Atsuko Hiragyani, who was born in Japan but studied film in the US. At its centre is bored fifty-something office lady Setsuko (Shinobu Terajima), who helps out her niece by taking her place at a pre-booked English class. The teacher John (Josh Hartnett) has a worryingly touchy-feely approach, but it still comes as a surprise when he and the niece skip town and run off to LA. Setsuko and her sister have no option but to hop on a plane to the US and track them down. For the most part this is a light-hearted culture clash comedy seen from an unusual angle, and played very much in an American indie style - but then the tone takes a couple of unexpected shifts in the third act, into something a lot more Japanese. The gear changes don't entirely work, but the result remains entertaining enough.

Where I Belong has a surprising amount of charm for a film that starts with a woman getting stabbed during a handbag theft. The stabber is Izumi (Kazuyuki Ajiima), who panics and goes on the run, ending up in a small rural village by accident. A kindly old lady takes him in, and over a couple of weeks Izumi slowly learns a new way of life. His transformation is totally believable: in the early stages you can see him mentally struggling with the very concept of kindness. His gradual redemption is perfectly paced, although there's an edge given to it by our suspicion that the idyll can't last forever. Shinji Azuma's film isn't especially subtle - there's a bit of foreshadowing in the middle that basically spoils the ending if you happen to be paying attention - but it's a delightful piece of work anyway. 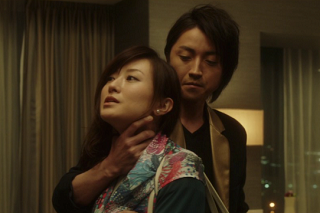 Like Sing My Life, only with much more strangulation, Memoirs Of A Murderer is a remake of a Korean film. Confusingly, it's not based on the almost identically titled film which The Belated Birthday Girl dismissed in a single sentence at last year's LFF, but on one made five years earlier. In 1995, a strangler kills five people in Tokyo and evades capture: in 2010, the statute of limitations on his case expires: in 2017, he reveals himself to be Masato Sonezaki (Tatsuya Fujiwara) through the publication of an autobiography and a series of high-profile media appearances. This annoys several people, including the cop who failed to catch him first time around. Yu Irie's film tries all sorts of devices to to make itself feel edgy, including an aggressive surround sound mix, a glitchy electronic score, and irritating switches in aspect ratio to delineate the past and present. It takes a long time to find a coherent tone, eventually settling down as a jet-black satire on the nature of celebrity: which is just as well, because in the second half it takes several wild leaps into the realm of complete and total bollocks. Not that it isn't enjoyable at that level, you understand, but it may come as a shock that the realism of the opening scenes isn't sustained in the slightest.

From there, we move on to a film that I know for a fact The BBG has seen: Kenji Uchida's After School, which she reviewed during her 2008 academic visit to Japan, and which we subsequently got to see together at a one-off screening at BAFTA in London. We've seen all of Uchida's films since then - well, both of his other ones: A Stranger Of Mine in the JFTFP 2012 tour (and its Korean remake a year later), and Key Of Life at the LFF (though we haven't as yet caught its own Korean remake that's currently on Netflix). As you can see, it's a very small back catalogue, and After School is the only one as yet untouched by Koreans. But all Uchida's films share a love of deceiving the audience, which makes him perfect for this season. Starting with the disappearance of a salaryman, and the attempts of a former schoolmate and a private detective to track him down, the plot takes a huge number of unexpected turns. It's still a film that can survive multiple viewings, although it'll never feel quite as much fun as it did the first time you saw it. 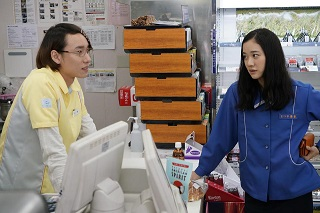 Junko Takekawa introduced the next film at the ICA by saying that when it was released in Japan "half of the audience loved it, and half of the audience hated it... so on average, it's OK." Japanese Girls Never Die is the second film this season to feature Yu Aoi having bad sex, but it's a lot more entertaining than Birds Without Names. This is partly down to director Diago Matsui's desire to fragment the narrative as far as it will go. The opening shows you what to expect in a dizzying sequence of apparently unconnected shots, which gradually resolve into two threads. In one, a young woman called Haruko (Yu Aoi) struggles to get by in her everyday life: in the other, three twentysomethings make their name as graffiti artists with a stencil piece based on Haruko's missing person poster. The aim, you presume, is to show how the two threads are linked, and the film takes its own sweet time getting there. On the way, it manages some entertaining skewering of Japanese gender stereotypes: the men neanderthal in their sexism, the older women continually insulted but resilient, the younger women forming gangs to attack random blokes in the street. Its satire isn't especially subtle, but it does the job.

Inevitably, there's a film by Takashi Miike in the programme: also inevitably, it's a bit too long. The Mole Song: Undercover Agent Reiji is an adaptation of a manga largely dedicated (if this film is true to its source) to taking the mick out of the yakuza. Reiji (Toma Ikuta) - first seen stark naked and strapped to the bonnet of a speeding car - is a terrible cop who's been bumped sideways into an undercover role, wheedling his way into a yakuza group to investigate their role in drug trafficking. The first half of the film takes this basic setup and adds multiple surreal spins to it with hilarious results, making it disappointing when it becomes more draggy and serious later on. Thankfully, it rallies again for the final quarter, saving some of its most ridiculous ideas for the climax. But with a bit of trimming, this could have been even better. 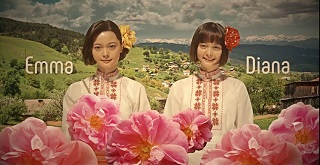 The Dark Maidens is based on a novel by Rikuko Akiyoshi, and though its roots remain pretty obvious in Saiji Yakumo's adaptation it still works well as cinema. Five young women convene a meeting of their school literary society, shortly after the shocking death of its leader Itsumi (Marie Iitoyo). Each one reads out a story describing her relationship with Itsumi: somewhere in the discrepancies between their stories lies the truth about what happened to her. It's possible to work out where the plot is heading quite early on, and yet still enjoy the geometric precision of its assembly. It sets its tone quite early on with a series of revelations underscored by trashy thunderclaps, which cues you up for the vaguely self-parodic nature of a climax that goes in the direction of what can only be described as Full Korean.

Our final film at the ICA was an anime, and surprisingly for once it wasn't sold out, maybe because it's over a decade old and the hardcore fans may have already seen it by other means. Sword Of The Stranger tells the tale of a young boy and his dog, being chased after by all sorts of nasty people: a wandering nameless swordsman becomes their only protector. Meanwhile, in what may or may not be a completely unrelated sequence of events, a group of Chinese warlords are building a large badly integrated CGI construction in the middle of hand-drawn Japan for reasons they're keeping to themselves. The story is pacy and its secrets - of course there are secrets, or it wouldn't be in this season - are carefully withheld until absolutely necessary. But where Masahiro Ando's film falls down is, surprisingly, in its action scenes. The scale of them is impressive, especially the climax: but Ando drenches them in motion blur, fake camera shake and jerky zooms. It takes a huge amount of technical effort to make hand-drawn battles look like unwatchable Michael Bay nonsense, and it really wasn't required.

To conclude by copying and pasting the important information from part 1: the tour is covering a fair chunk of the UK from now until March 28th, visiting London, Birmingham, Bristol, Chester, Colchester, Derby, Dundee, Edinburgh, Exeter, Inverness, Kendal, Leicester, Lewes, Manchester, Nottingham, Sheffield and Stirling (though you've already missed the London, Bristol and Derby screenings, sorry). Visit the Japan Foundation website for full details of the dates when it's visiting your town and the films to be screened there. Alternatively, look down the page for a playlist of trailers (missing the one for Room For Let), and a set of purchase links from Amazon Japan (no DVDs available as yet for Birds Without Names, Oh Lucy! and Joy Of Man's Desiring). If you don't read Japanese, you'll have to work out for yourself which film is which, but that's part of the fun, isn't it? Oh, and don't expect any English subtitles, obviously...