Simian Substitute Site For March 2018: A Surprisingly Deep History of Celebrities Being Attacked by Primates 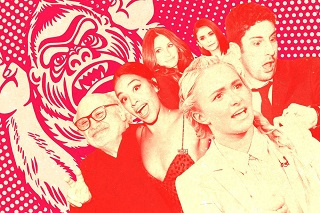 Internet: Or is this Telly? Depends where you live, I guess. Stories From Norway is currently showing every Monday night at 9.30pm on TVNorge, and if you're not Norwegian that information is of precisely zero use to you. So why should you care? Because this is the new show from Ylvis, the guys who went viral with The Fox several years ago. Stories is a series of documentaries about recent bits of Norwegian history - the two episodes broadcast so far involve a tower construction project that went out of control, and a Justin Bieber tour that went similarly pear-shaped. Ylvis have gone to the effort of interviewing the main people involved in each case: and then they've turned the results into a musical, with several ridiculous songs based on the story in question. Interestingly, all the songs are in English: and on the day after an episode's transmission, they're all available worldwide on Spotify and iTunes as a digital EP. A couple of video clips have also made it onto YouTube, and based on that evidence these songs work better when they've got a bit of visual context behind them. But Ylvis' way with a catchy tune and an unexpected lyric is still strong - a list of Bieber's hotel rider requirements has 'Norwegian shitting snack' casually buried in the middle. I have no idea if the concept of the 'investigative musical' can be sustained for a full series, but I'm willing to find out.

Movies: Or is this Video? Duncan Jones' new film Mute has gone directly to Netflix, but it's also getting the briefest of theatrical releases courtesy of Curzon cinemas, and that's how I got to see it. If you're reading this on March 1st, you still might be able to catch it in a cinema today. I wouldn't rush to do that, though, because it's a right old mess. The one possible advantage of watching it on the big screen is to get a better look at its vision of Berlin in the future, but it quickly becomes apparent just how derivative it is visually - all the steam, neon and flying cars just make it Blade Runner with a U-Bahn system. Take the visuals away, and all that leaves you with a badly-plotted story about mute bartender Leo (Alexander Skarsgård) searching the streets for his missing girlfriend, which has so many gaps in its logic that you can only assume the film used to be an hour longer. There's a totally separate problem with the queasy attitude the film has to its female characters, who are all either sex workers or young girls being threatened by paedophiles. Jones was responsible for two of the smartest sci-fi films of recent years - Moon and Source Code - but Mute is so far away from them that it's hard to believe it's by the same guy.

Music: Well, this is definitely Music, anyway. This month's Audio Lair playlist is made up entirely of tunes released during the first two months of 2018. A few words of explanation, plus videos where available for the non-Spotified amongst you:

In the meantime, your Simian Substitute Site Of The Month for March 2018 is A Surprisingly Deep History of Celebrities Being Attacked by Primates, an article by Andrew Gruttadaro from LA pop culture website The Ringer (brought to my attention by Victor Field, so thanks to him for that). It's inspired by a recent news story about Hayden Panettiere getting scratched by a monkey while on holiday in Barbados. As the splendidly Ronseal title suggests, it isn't the first time this sort of thing has happened.

Coming up this month: we'll be reporting on the last few days of MostlyFilm, of course, although you should be automatically checking there at least once a day until Tuesday March 6th. In addition to that, there are a few new BrewDogging posts on the way. Can we get to fifty bar reports by the end of March? You'll have to wait and see, as I'm not entirely sure myself. Feel free to shout words of encouragement and so on in the comments box below.