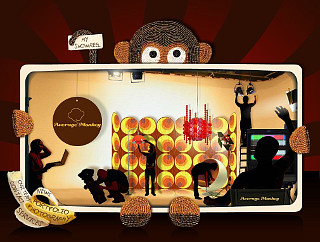 Internet: Last month in this slot I mentioned Stories From Norway, the terrific new musical comedy documentary series by Ylvis. Statistically, it's likely that the vast majority of you reading this don't live in Norway, so there's very little chance of you seeing the show. Or is there? Here's the thing: my wacky globe-trotting lifestyle (and there's plenty of that to talk about very soon, see below) means I spend a reasonable amount of time in hotels, trusting in the non-existent security associated with most hotel wi-fi systems. In these situations, a decent Virtual Private Network is necessary to keep your personal browsing habits away from the eyes of nasty people. My VPN of choice is Avast Secureline, mainly because I already use their anti-virus software and it seemed like the logical next step. VPNs anonymise your browsing session by routing it through a server in another location, and SecureLine has a wide range of servers arranged around the planet so that there's always one near you. In Oslo, for example. So, with my VPN set to route through Norway, I can go to TV Norge's Dplay site: and because it thinks I'm based in Oslo it'll let me stream full episodes of Stories From Norway, complete with adverts for local products I can't buy. If you end up doing the same, try the episode The Andøya Rocket Incident, which has just enough English to be easily comprehensible, and will make you feel surprisingly nostalgic for Boris Yeltsin.

Telly: A rather unusual thing happened on the morning of Sunday March 11th: there was live sumo on the telly. We've come a long way since May 2009, when I wrote Armchair Sumo For Lazy Bastards to explain the rules to a casual viewer. Back then, the best way to watch the sport was via the live stream broadcast on the Nihon Sumo Kyokai official site. Unfortunately, they realised a few years ago just how popular that live stream was, and started charging ridiculous amounts of money to watch it. Viewers from outside Japan had to fall back on less official methods, like Jason Harris' splendidly informative YouTube channel. More recently, though, the international channel NHK World has started getting in on the act. A year or two ago, they dipped their toe in the water with a daily package of Grand Sumo Highlights: this month, they took it a little further by broadcasting the last hour of the first day of the March basho live. Sure, that meant being in front of your TV at 8am on a Sunday morning, but that was part of the thrill of it. That first day of live coverage, plus the highlights shows for all fifteen days of the tournament, are currently archived on the NHK World sumo page, but be warned they'll only be there until April 9th. How succcessful was their live experiment? Hard to say: the best way to find out may be to watch NHK World at around 9am on Sunday May 13th, and see if they give the same treatment to the next tournament in Tokyo.

Travel: The traditional links to Telly Savalas and Bono can only mean one thing: early in March, The Belated Birthday Girl and I travelled up to Birmingham for the weekend. Specifically, it was the first weekend in March, when the Beast From The East was wreaking havoc across the country. The main focus of the visit was to see Everything Everything play live, and we were rather pleased with ourselves when we managed to make it into Birmingham despite the inevitable travel chaos. Which made it all the more offpissing when the band cancelled the show just seven hours before curtain up, literally while we were celebrating our arrival with a coffee at Yorks Cafe. So, you know, screw those guys. Still, a day spent in Birmingham isn't a total writeoff, as there's plenty of other stuff to do. At the time when we should have been seeing the gig, we grabbed a rather good curry at Pushkar, followed by Black Panther at the Everyman Mailbox. We spent Sunday morning as scheduled with both breakfast and art at Ikon Gallery: they had a couple of particularly good linked exhibitions of prison art by Edmund Clark and Thomas Bock, but you've missed them now. Finally, predictably, there was beer: the inevitable BrewDog visit, of course, but also the more trad real ale delights of the Post Office Vaults, and the trendier environs of Purecraft Bar & Kitchen.

In the meantime, your Simian Substitute Site Of The Month for April 2018 is Average Monkey. They're a video and film production company based out of Tallinn in Estonia, and the site lets you find out about their past work as well as telling you how to hire them yourselves.

Truth be told, there's only one reason why I'm mentioning Average Monkey here: because I'm in Tallinn myself at the moment. As I write this, The BBG and I are wrapping up Nordic Expedition II, a followup to our five-country Scandinavianish jaunt of 2016. This one's a little shorter - just over a week - but similarly wide-ranging, covering a couple of cities we've never been to before and revisiting a couple of old favourites. So that should take up most of the next month's posts, possibly longer at my current work rate. Watch this space, and feel free to nag me in the comments below if I don't get the writeups together in a decent timeframe. Now, if you'll excuse me, there's a sauna heated up and ready for me next door...