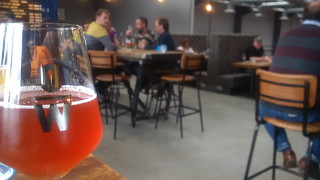 Earlier this year - in BrewDogging #49, to be precise - I introduced you to the concept of the Intergalactic Beer Visa, a small passport-sized booklet allowing you to collect stamps from each of the bars you visit. At the time, I didn't mention that the visa also has a competitive element to it, in that you can claim prizes for collecting stamps from all of the bars in a particular category. For example, all the ones in England, or Scotland, or London.

The easiest prize to claim is one they call Homedog, for anyone who manages to visit all of the bars in the brewery's home city of Aberdeen. The Belated Birthday Girl and I achieved that over the space of a single weekend - a weekend, in fact, when the number of Aberdeen BrewDog bars literally increased by 33%, thanks to the opening of BrewDog Overworks. We even managed to fit in an entire AGM between the second and third one.

So as well as being a review of a new bar, this piece will also double as the unofficial proceedings of the BrewDog Annual General Meeting 2018, held on Saturday April 7th. As you'll know if you've read our previous reports from 2012, 2013, 2014, 2015, 2016 and 2017, the AGMs are day-long boozy affairs held in the non-intimate surroundings of the AECC in Aberdeen. (Currently scheduled to get even more non-intimate after next year.) As ever, we made a weekend of it, flying up to Aberdeen on the Friday night and back again on the Sunday. We even had our plan of attack for the beer visa roughly in place from the beginning - we'd visit two bars on the Friday night, and the other two on Sunday lunchtime.

That plan got slightly disrupted on the plane up from London, because we'd chosen to bring our own in-flight entertainment in the form of the BrewDog News Podcast. This is a surprisingly unofficial affair, put together on a fortnightly basis by a couple of shareholders, discussing all the beer-related news that other shareholders might want to hear. It's audibly not the work of professionals, but their enthusiasm ultimately gets you over the odd verbal stumble or technical glitch. Episode 1 was billed as an AGM preview, so we fired it up on the plane to Aberdeen. One nice feature in the episode was a quick run around Aberdeen's various craft bars, to give the 8000 attendees some ideas of non-BrewDog places to visit. This was where we first heard about a new bar from Aberdeen brewer Fierce Beer that was under construction at the time of recording, but might be having some sort of soft opening on the day before the AGM...

Within an hour of the plane touching down, we're there, knocking back beers in a bar that apparently only opened a couple of hours earlier. The Fierce Bar is literally just around the back of BrewDog Castlegate, but you suspect there's no real rivalry between the two: after all, one of the most popular beers we'll encounter this weekend will be Very Big Moose, the collaboration between Fierce and BrewDog that knocked everyone's socks off at last year's Collabfest. It still feels in a very unfinished state - they've rushed the opening to catch the massive influx of beer geeks into the city, and the combination of New Bar Smell and a curiously overlit feel make it less of a bar, more a big room with lots of people drinking in it. But nobody's complaining, and the beer is as good as we've come to expect from Fierce. We don't stay there too long, as we have other business to attend to: dinner at Musa (where the Cocoa Psycho affogato has sadly been replaced by an ice cream float with too much whisky in it), a drink at the Flagship and Castlegate bars to get our first two visa stamps, and getting some sleep in anticipation of the long day to follow.

In terms of the business side of the next day's AGM, pretty much everything you need to know about is here. In the usual self-aggrandising lists of Things That Rocked and Things That Sucked, James Watt and Martin Dickie are curiously reluctant to mention that they've closed down more bars over the last twelve months than they opened in the same period. But there's no denying that the list of openings they're promising for 2018 - a couple of which have already happened and been written about here - looks set to remedy that situation. Not to mention their just-announced acquisition of the Draft House chain of bars, which adds a dozen or so differently-styled venues to their portfolio. (No, we won't be reviewing those in this series, calm down.) We're also told about their expansion into America and Australia, the ongoing plans for a hotel on the Ellon brewery site with Punk IPA on tap in every room, a new Swedish bar in Norrkoping confirmed just one week after we've come back from Scandinavia DAMN YOU JAMES, and a large investment in London craft cider makers Hawkes to help cater for a neglected subsection of their customers.

There's one other big announcement made in this session, but let's put that aside for two paragraphs to look briefly at what else the AGM has to offer. We seem to alternate between good years for beer queuing and bad years, and this one counts as a good year: there are enough bar staff to cope with the demand, and you never have to wait too long. The system for keeping people informed of the schedule and bar lists this year - a lanyard holding a series of cards, including your beer tokens for the day - seems to work pretty well, although I'd suggest in future they should punch the hole at the bottom of each card rather than the top, so that you can still read them while they're hanging round your neck. The success of the beer tasting sessions is all down to how lucky you are with your choices, and we do rather well: BrewDog's own tasting showcases a couple of rare barrel-aged monsters, while Northern Monk's is notable for the suitably monastic atmosphere they generate in the room with music and cowled serving staff. The bands, as ever, are largely white boy rock, with The Van T's and The Big Moon proving to be rare girly exceptions. The one potential administrative hiccup is a little-reported footnote in the AECC's venue regulations which says people carrying backpacks will be refused entry, but there's apparently only one person seriously affected by that rule on the day. Unfortunately, it's the guy who runs the BrewDog News Podcast. Oops.

Cut to Sunday morning, and The BBG and I push through our hangovers to put the last part of our plan into operation - getting the bus up to Ellon to grab breakfast and our third stamp of the weekend at the DogTap brewery bar. As with last year's visit, we've booked ourselves on a brewery tour, on the assumption that it'll be different from the last one we went on. It is, in parts - we get to see this, as well as a much better look at the quality control area than we've had before - but it's not quite as different as we were hoping, because the tour doesn't take in the MASSIVE NEW BUILDING just across from the brewery. Fortunately, we've left ourselves some time to check it out after the tour.

So, over 1300 words into this piece, let's finally get around to talking about BrewDog Overworks, whose opening coincided with the AGM weekend. The principle is this: sour beers are the new rock 'n' roll. They're everywhere these days - on Collabfest 2017, the first four beers we drank were all sour. If you want to do sour beer right, though, you need special conditions: if the wonky yeasts used in them (your Brettanomyces and so on) get into contact with anything else in the beermaking process, they'll contaminate it in no time. Hence Overworks, a separate experimental brewery that's just going to be used for the development of sours, with its own brewery tap bar attached, giving us the final stamp in our Aberdeen set. (I won't tell you what special prize we get for achieving that, as it's apparently meant to be a surprise. It's only small, let's just say that.)

Once we've got past our second New Bar Smell of the weekend, we can appreciate the lovely layout of the bar: an upper storey balcony looking out over the sour brewery itself, which is a terrific view in its own right. As for the bar itself, it has a dozen or so taps split between Overworks' own brews and a collection of guests - some sours by other breweries, and a couple of more traditional beers like the inevitable Punk. Because let's face it, you wouldn't want to spend an entire session drinking this stuff. We go for Punnet (a Brett Saison) and Pyrastor (a Scottish sour), and they're... fine, I guess. In the words of Mr Jinks the cat, I generally hate them Brettanomyces to pieces: mainly because of our experience with a Siren Brett-enhanced bitter hilariously titled All Bretts Are Off, a bottle of which basically exploded in our kitchen due to over-fermentation. By comparison, these beers are drinkable and don't drench you in vinegary suds, but one's enough before you're prepared to move on to something else.

Still, it's a very cool bar, even if you don't particularly appreciate the stuff they're making in the room next door. And bear in mind that it's not just early days for the bar, but for the brewery as well - these are the first few sour beers BrewDog have made using this kit. Once they've had time to bed it in and start playing around with it a bit more, the results could be very interesting. We'll have to wait and see. Maybe at the 2018 AGM, perhaps?