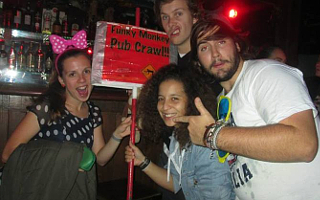 In the meantime, your Simian Substitute Site Of The Month for August 2018 is Funky Monkey Pub Crawl. This is an organisation that runs regular bar crawls in the city of Lisbon. Why would that be relevant? Oh, go on, take a guess.

So, this month, expect a combination of the following: clearing up a backlog of BrewDogging posts (there are three bars I've visited that I haven't told you about yet, plus a fourth on the way), plus some new travel writing that may include some stuff about Portugal, you never know. Feel free to speculate in the comments box below.