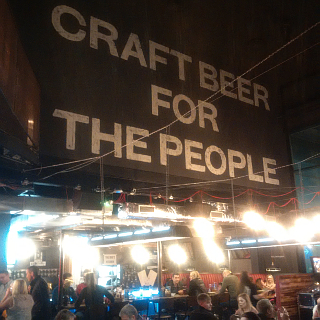 BrewDog Milton Keynes is an unusual case, it has to be said. Back at the 2018 AGM, it was announced that BrewDog had acquired the dozen or so bars in the Draft House chain, which they planned to keep running as a separate concern from their existing bar estate. But a couple of months later, they announced an exception to that rule: they closed down the Milton Keynes Draft House, gave it the standard distressed furniture/self-aggrandising windows/naked lightbulb makeover, and re-opened it as a BrewDog bar.

Milton Keynes isn't that far away from London, so a day trip was always on the cards for us. But as the bars get more and more standardised, these reviews have become more and more dependent on the other interesting stuff you can find in the vicinity of the bar, and, well, we're in Milton Keynes. Thankfully, the next station down the line from there is Bletchley, which means we can spend the day at Bletchley Park. We were last there almost five years ago, when we spent most of the day in the museum block, finding out the full story about the men and women who cracked German codes here for the duration of the Second World War. This time, taking an anti-clockwise route around the grounds, we cover a lot more over the space of five hours. Most of our time's spent in the wooden huts where the work actually took place, which now contain a series of exhibitions both temporary (a collection of paintings inspired by the James Bond books) and permanent (a detailed look at the Bombe machines that did a lot of the computing work involved in breaking codes). We didn't have time to revisit the National Computing Museum, or check out the National Radio Centre: still, as our tickets allow for multiple visits over the next twelve months, we could always use that as an excuse to come back to this part of the world.

Back in Milton Keynes once they've thrown us out of Bletchley, it's a nice ten-minute walk straight ahead out of the station (take the right hand underpass) to get to the BrewDog bar, located in the middle of a cluster of other chain restaurants and bars - Nando's, Be At One, GBK and so on. Because that's where we are now after 56 of these posts: BrewDog's grown from an idiosyncratic collection of individual bars to a chain in its own right. If anything, the standardisation has become even more rigid in 2018, where nearly all the new bars that have opened - Seven Dials, Tower Hill, Lothian Road, Overworks, and now this one - are huge places split over two or more stories. Okay, in this case it's a structure they've inherited from the Draft House that used to be here, but it does seem like the days of them opening small twelve-tap bars like the long-gone Homerton are well behind us now.

Still, at least there are a couple of subtle variations to the template. Downstairs is the usual arrangement of benches, booths and wooden steppy things (the latter first spotted in Doghouse, but now all the big new bars seem to have them as impromptu seating, presumably based on the thinking that the best way to fit more customers in is to stack them vertically). There's also a small kitchen, although The BBG informs me that the main kitchen is carefully hidden away on the upper floor. The only things visible to the public on that floor are the loos and a small number of ping-pong tables. Initially, I thought the upper storey was separated from the lower level by some sort of anti-suicide netting: in fact, the nets are there to stop stray table tennis balls flying out onto the ground floor and starting off involuntary sessions of beer pong. The most unusual feature of the loos is that they feature two rows of sinks backing directly onto each other - if you're not concentrating while you're washing your hands, you'll think there's a mirror in front of you, and then you'll look up and suddenly think you're a ghost.

As for the drinks, they're all up to the expected standard. We make our way through a selection of newish BrewDog brews - the three beers in the current Fanzine small batch collection, and a pint of Lost Lager. The latter is the latest in a long line of BrewDog attempts to make a lager that's simultaneously not so bland as to offend their core customers, and not so unusual as to scare off traditional lager drinkers. It's okay, I guess: as usual, though, every new BrewDog lager ends up being hyped as an unexpected return to form after a run of disappointments, like we used to say about new Woody Allen movies until we realised we didn't need to do that any more. (Yeah, I'll say it: LAGER IS A SEX CRIMINAL.) We finish off the evening with a suitably OTT nightcap - Uiltje's Mind Your Step Maple Edition, a ridiculously complex imperial stout clocking in at an equally ridiculous 14% - which sets us up for our long journey back home, enlivened by a couple of unexpected train cancellations.

Milton Keynes isn't all that convenient a bar to commute to from London, but it seems to be drawing a respectable crowd of locals - it's reasonably busy early on a Saturday evening, and gets buzzier as the night wears on. It's a shame that more and more BrewDog bars seem to be approaching the size of barns these days, but they're not apparently having any trouble filling this one.

Having lived in Milton Keynes for four years in the late Eighties, the thing to say is that it doesn't exist as a closed bubble in isolation from everywhere else. It was created within three older towns of Bletchley (as you mentioned), Wolverton (historic railway town) and Stony Stratford (where I used to work). As such people would often socialise out as far as Northampton in one direction, and in my case (back in the days before MK Dons) would go to footie at Luton.

Back then within the city the main entertainment centre was at a complex called The Point (but I believe there is a lot more happening there now). As such one actually felt as if you were a part of something new and special living there in the Eighties, but I believe it has become a lot more populated and crime ridden since.

The Redway (off road city wide pedestrian walkway) was always a special feature for me as a jogger. But ultimately it was never a place to live without a car, for which it was essential to develop a fondness for roundabouts.