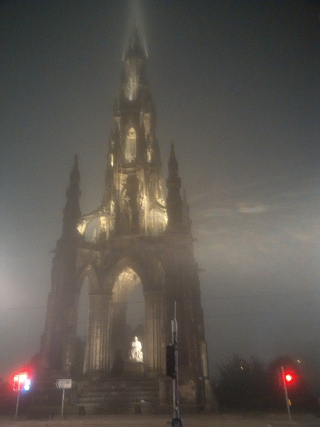 It's been about two weeks since the 2018 Edinburgh Festival finished, and as I have to keep reminding people, I wasn't there this year. I did, however, write a post a couple of months ago recommending some shows: and I made a separate visit to the city back in May with The Belated Birthday Girl, during which we succeeded in drinking some beer but failed to fly in a helicopter.

But - much like they've done since 2000 - Nick and Charmian stepped in during our gap year and organised the annual visit to the Festival for a bunch of the Pals. Here are some notes from them about what they liked. Thanks to them for that, and we'll meet you all back there in August 2019. The Big Yin famously said there are only 2 seasons in Edinburgh, July and Winter. So after a really hot July, it was bound to rain the entire week and it duly did, reminding us southerners of the purpose of umbrellas and raincoats. This year I had the crazy idea to organise my festival on a day to day basis, sitting in Nero's at 8 in the morning reading The Scotsman (huge thanks to Lesley for saving the festival supplements from the previous week). But there are drawbacks, namely not being able to book anything at the Traverse (which sells out quickly) or any of the other trending shows going viral and selling out. After a truly dismal line-up at Mervyn Stutter on the Sunday, I still didn’t have anything better to do than go see Stutter again on the Monday, but was rewarded with not one, not two, but three shows I went to see in full.

Our fave monkey will undoubtedly remember Jim Tavare, who was a regular on the comedy circuit in the days when he regularly visited the Comedy Store. But his acting work was proving far more lucrative, so he moved to LA to live the dream. Unfortunately he suffered a near death car crash in the Hollywood Hills and broke over 30 bones in his body. This necessitated him going through the American medical system and being left with a bill of $850,000, some of which was covered by his medical insurance and some not, which meant he still had to remortage his house and rely on the generosity of 2 benefit gigs to pay off most of his debts. As an unknown comedy name to the millennials, Jim was reduced to playing the Free Fringe to make a few quid to put towards his medical bills. If you wanted a show that celebrated 70 years of our NHS, this was it.

The second show I saw from the Stutter bill was Jo Caulfield, underrated in my opinion. Cha and myself definitely identified with her story of going to New York to celebrate a big birthday at a posh hotel: the receptionist, not believing by their appearance they could possibly be staying at the hotel, snootily went through the motions of telling them the hotel had a 24 hour bar, was 5mins away from the Metropolitan museum, 10mins from the Guggenheim and 20mins away from another prestigious museum. To which Jo replied, why are you telling us all this stuff about museums when you've got a 24 hour bar? Americans don’t understand irony!

The third show I saw from the Stutter bill was The Canterville Ghost by Oscar Wilde. This highly impressive show split apart the three acts of the play and inserted old fashioned music hall style acts in between the play acts, complete with a chairman introducing the acts, all very effective and entertaining.

Think I'd better leave the show reviews for more important stuff. Meal of the week went to Cha’s magnificent effort producing a full Scottish fry up without a grill pan (missing from the flat) and having to improvise a makeshift grill platform. “A truly exceptional piece of 5 star cooking” - The List. Restaurant of the week went to Aizle, taking the idea of Ready Steady Cook to its ultimate extreme: you are presented with a list of twenty ingredients chalked up on a black board, asked if you want to exclude any of the ingredients (we didn’t), and off they go and knock up a truly exceptional five course meal. We can't wait to go back there next year. Beer of the week went to Jarl, a full on citrus experience and a cracking session beer. Jarl is single hopped with Citra, giving the beer a very distinctive citrus flavour and aroma: it's also available down south.

As organisers this year, Cha and I can breath a sigh of relief and welcome back our fave monkey to organise next year's fest. Thanks to everyone who attended. 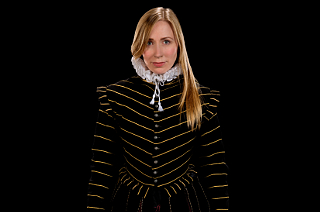 It was me and Nick in the driving seat again this year, and all the ingredients were there for another successful Festival-going week: the buzz that hits you as soon as you approach the centre of Auld Reekie; very conveniently-located accommodation; a high proportion of shows I’m glad I’ve seen; regular pubs and eateries well up to their usual standard and, of course, great company.

However, my beef with the organisers returned about scheduling a lot of shows I wanted to see at the same time, which then meant having to decide from competing choices. Having said that, though, overall I was happy with my choice, and my highlights were as follows:-

- Orlando: A wonderful adaptation of Virginia Woolf’s magical tale of the immortal and free-spirited poet of the title, realised in an absorbing performance by Rebecca Vaughan.

- The Marilyn Conspiracy: This taut and intense play marked a welcome return for Guy Masterson, convincingly exploring the possible involvement of the Kennedy family in the hours following the discovery of Marilyn Monroe’s body and the police being called. It bore some resemblance to his brilliant Twelve Angry Men some years back.

- The Canterville Ghost: The use of a Vaudevillian theme to present Oscar Wilde’s fearsome ghost story was original and worked brilliantly, as well as showcasing the wide-ranging talents of the cast, who created the atmosphere perfectly.

On the foodie side of things, there are a couple of things to mention:

- Best new restaurant discovery: Aizle in St Leonard’s Street (very near Hermit’s Croft, where we stayed last year). Their tasting menu was highly original and they came up with unusual combinations of ingredients which worked beautifully.

- “If it ain’t broke, don’t fix it” award: Hendersons for introducing (slow) waiter service and removing some of their reliable old favourites from the menu.

Lastly, I’ve been reminded by Spank’s blog of the sobering thought that next year it will be the 30th anniversary of mine and Nick’s first visit to the Festival (when we bumped into Spank on his first visit there!). A lot has changed since those days, but the Festival has lost none of its magic. 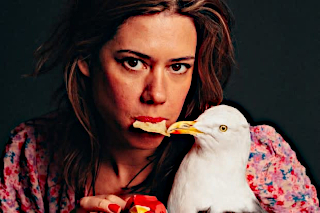 A fantastic week and thrilled to be in great accommodation next to the Pleasance Courtyard. Many thanks to all who organised it.

As last year, a mixture of hits and misses. Among the hits Lou Sanders, with her solo standup Shame Pig and possibly the most gigantic labia in the world, was hilarious and definitely a name to watch for the future. Simon Evans was brilliant in Genius 2, bringing the house down with his derisive vision of cultural dumbing down.

Another hit was Gothic Tales in the Banshee Dungeon, an atmospheric reading of excerpts from stories by Poe, Bram Stoker and Baudelaire, among others. Beautifully read by Isabel Schmier, the show was deliciously creepy - even at 11.30 on a summer morning!

A good freebie was Conor Clarke McGrath’s Stalagmite, a surreal comic monologue heroically delivered against a backdrop of the pub band and a bunch of drunken Scots.

One notable miss was a spoken word show about Edinburgh’s creepy past for which we paid £5 and walked about 5k. It wasn’t helped by the screen breaking down, but the two actors were unconvincing and actually argued with each other over their lines. But at least it was in a pub and the Sauvignon Blanc was nice and chilled! And anyway, somehow the misses are all part of the fun.

We also managed to get to the Book Festival and saw Kate Mosse, Philip Reeve and Louis de Bernieres, all of whom were very interesting and informative. Downside? It cost a fortune in books to sign!

Edinburgh was once again a wonderful place to be, to walk round (sometimes with a glass of wine in hand), see the sights, see the shows and just chill and talk to people. Can’t wait to get back there.