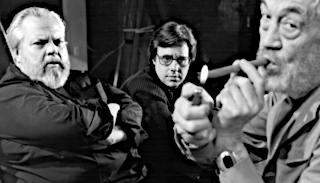 As suggested by Ian Mantgani in his film on Monday, booking tickets for the LFF requires you to have a process. For me, a large part of that process involves slapping my shortlist of selections into an Excel spreadsheet, so that I can see potential clashes. For each film I list its title, time, location, price, and one other crucial factor: a column headed 'Distribution Y/N'. If two films clash, then I'll choose one that doesn't have a UK distribution deal over one that does, purely because there's a chance it may never get seen again outside of the festival.

In the last couple of years, that column has become 'Distribution Y/N/Netflix'. More and more movies made to go direct to streaming services are turning up in festivals, as bigger and bigger directors are taking their cash - this LFF alone has Netflix movies from Alfonso Cuaron, the Coen brothers, David Mackenzie and several more. Resolving clashes therefore becomes a bit more complex, as you have to make a case-by-case decision: am I happy to watch this film on my laptop as part of my subscription, or do I want to grab one of the very few chances to see it in a cinema?

In this particular case, one thing swung my choice in favour of watching it at the LFF: documentaries about directors screwing up are absolute catnip to a festival audience. And Morgan Neville's film features one of the biggest ever directors and one of his biggest ever screwups, telling the story of Orson Welles' most notoriously unfinished film. It started with a basic bad idea: we see Welles announce to the press that as all of his previous movies have been so rigorously controlled, he wanted to make one with a much more improvisational approach, trusting in luck to create happy accidents that wouldn't otherwise appear on screen. With that in mind, he starts work in 1970 on The Other Side Of The Wind. When he dies in 1985, it still won't be finished.

There's no script, just a basic concept that Welles keeps locked away inside his head: two interwoven strands, one depicting a director's last film (a parody of currently trendy Euro-arthouse tropes), the other showing a party held by that director on the last night of his life (filmed in a documentary style). For the next few years, Welles grabs images and scenes whenever he can, dragging in people and locations as he encounters them, assuming that at some point they'll eventually fit together. He spends three years filming actors' reaction shots to the director's lines before he even gets around to casting the role (giving it to John Huston). Meanwhile, all the personality clashes and money problems you encounter on a normal movie are adding to the confusion.

Neville himself has to pull together a narrative from tons of disparate elements, but has the advantage that the story of the making of Wind is a lot more compelling than the story Wind was trying to tell. It's a chaotic mixture of offcuts from the production, new interviews with cast and crew, lines from other Welles films wittily repurposed as responses to the interviews, and other archive footage, and somehow it all hangs together. There's a real emotional tug to the film's dying fall in its final minutes, coinciding with Welles' gradual realisation that his movie will never get completed. The only element of the documentary that jars is Alan Cumming's arch to-camera narration, which is presumably meant to evoke Welles' own larger-than-life on-screen telly appearances. Cumming isn't remotely large enough (in any sense), and he feels less like a God figure and more like the host of a cheap TV show.

Which, in a way, this is. Because Netflix are releasing a new reconstruction of The Other Side Of The Wind in November, and commissioned They'll Love Me When I'm Dead as a making-of film to accompany it. Previous attempts to cut the footage into a coherent movie have failed: one of his closest collaborators, cinematographer Gary Graver, tried to do it shortly after Welles' death and had to admit defeat. It remains to be seen how successful producer Frank Marshall has been at the task - the clips we see in the documentary look ridiculously chaotic, but tantalising enough to make you curious about how they all fit together. This may explain why the making-of has made it into the LFF, but the actual new Orson Welles film it's about hasn't: it's all just been a great big cheeky advert to make us watch it on Netflix. Well, job done. 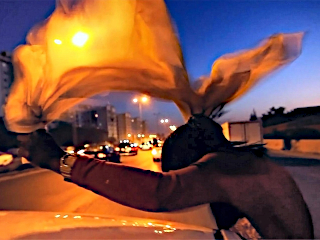 A lot has been written this year about this is the first post-#MeToo LFF, with the gender gap being seriously addressed like never before. 38% of the films in the 2018 festival have been directed by women, which is the highest proportion ever. How many of those are we going to see here? Well, this is the first, so let's count as we go.

It's also the first spot of Mike Leigh in the audience at this year's festival, leading me to speculate on what sorts of movies he likes. I've managed to identify two key categories: restorations from the archives, and documentaries about football. The latter category includes Substitute in 2007, and Naziha Arebi's new documentary about football in Libya (I'm considering two films eleven years apart to represent a trend, yes). Football's a popular sport in the country, and there's lots that we'd find familiar about the way they support it, all the way up to yelling the bassline from Seven Nation Army during times of triumph. Women's football, though? Not so popular (and we'd probably find that familiar too).

Over the years following the 2011 revolution, Arebi follows the Libyan women's national football team and their ups and downs. When we first meet them, they're just about to travel to Germany to represent their nation in a tournament. Inevitably, there's a lot of resistance to that - their families don't approve, nastiness proliferates on Facebook, and groups of daft old men have managed to convince themselves that all those bare legs will bring about the apocalypse. Eventually, for their own safety, the team is told that they can't go to Germany after all. Over the years we watch as the situation slowly changes from this position of deadlock, with the team trying to practice while their society is opposing them and their environment is constantly on fire.

Arebi latches onto a few distinctive characters - Fadma the gobby one, Halima the determined one, and Nama the displaced one - and uses them to keep us hooked into the progress of the team as a whole. We watch them start off as a group of girls with a shared interest, but by the end they've turned into a proper gang, with all that entails. Their story is packed with ups and downs, but remains compelling throughout. And there are plenty of hints that society is slowly coming to accept them: my favourite of these is the soldier who smirks when reading an official denunciation of the team, and finishes off by setting it on fire. Of the four films I've seen so far this festival, this is the only one that I can't find anything to complain about, so I guess it must be the best: let's see if it stays that way.