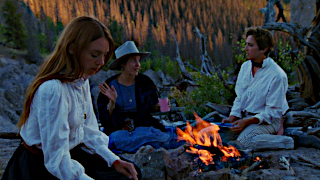 The LFF seems to be going a bit daft this year with content warnings posted outside cinemas. I've already expressed my concern about the sign outside the screening of Monrovia, Indiana, twitchily flagging up footage of a surgical operation as 'scenes of animal cruelty'. You could, at a pinch, argue that the programme listing for the film doesn't explicitly tell you there will be a gory bit in the middle, so it's basically the festival covering its arse at the last possible moment. But today's screening of Two Plains And A Fancy is heralded by a warning of 'scenes of nudity', which is if anything even more ridiculous. For one thing, the film advertises itself as a 'Spa Western', so a scene of open air bathing shouldn't come as a shock: for another, it's only one scene, which makes a joke within itself about how little nudity it contains. If they really needed a content warning, 'scenes of cack-handed attempts at camp' would be more suitable.

The three characters mentioned in the title are geologist Ozanne Le Perrier (Laetitia Dosch), spiritualist Alta Mariah Sophronia (Marianna McClellan) and artist Milton Tingling (Benjamin Crotty), and you suspect more time was spent coming up with their names than writing anything else in the script. We're in the 1890s, and the trio have taken a cheaply faked train journey to Colorado to visit a series of towns famous for their spas. They meet up with various people along the way, including a couple of time travelling inventors and some ghost prostitutes. Things happen. That's about it.

Two Plains starts off whimsically enough: writer/directors Lev Kalman and Whitney Horn have a distinctively naive style that has overtones of early John Waters. But Waters used that style partly as a cover for the subversive and transgressive stuff that he really wanted to get on screen, and partly because the less time he spent on filmmaking craft meant he had more time to spend on bumholes and dog dirt. Kalman and Horn don't really have anything here behind the camp, with the possible exception of Horn's pretty cinematography of the Colorado landscapes (the first thing we see on screen is a boast that Two Plains was shot on film, and it shows).

The banal dialogue and the cheap handwritten signage have a certain charm at the start, but that can only get you so far. Eventually it's hard to read Two Plains as anything other than unironically bad filmmaking, with its half-hearted jokes and over-earnest speeches falling flat time and again. And yet, somehow, the final scenes pull together various strands of the film into a climax that actually has a bit of wit to it. This may be the weakest thing I've seen so far at this year's LFF, but I liked the ending, and not just because it meant that the film was finally over. 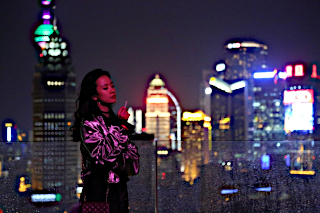 You know me: I've always been a sucker for stories about contemporary China, ever since I realised that not all Chinese films are about people in the olden days fighting each other. (Nothing wrong with a bit of that, though: see tomorrow.) Cathy Yan's debut as writer and director is an entry for the LFF First Feature Competition, and the contrast with the film I saw before it couldn't be greater.

We're introduced to several characters in rapid succession, initially with no obvious connection between them. There's pig farmer Old Wang (Haoyu Yang), typing to cope with the collapse of his investments and the simultaneous sudden death of all his pigs. There's Candy (Vivian Wu), the stubborn owner of a beauty salon, whose refusal to move out of her home is holding up the construction of a new housing development. And there's Zhen (Mason Lee), the young waiter who's become obsessed with a spoilt rich girl. All their stories will tie together via a single extraordinary visual image: the rivers of Shanghai gradually becoming clogged with thousands of pig carcasses.

As with a lot of modern Chinese movies, the underlying theme is the country's rush to embrace capitalism, and the ideals that get lost along the way. Yan's script is razor-sharp on this score, with the outrageous design of the new development turning out to be one of its best sight gags. There's also a lovely subplot involving an American executive and his secret second career, which points up how the West has become the aspirational model for the Chinese, even though they really like the look rather than the ideas behind it.

It all adds up to a brilliantly constructed satire on current Chinese mores. It's stylishly shot, and the story is always going in unexpected directions: I defy you to guess what the climax is going to look and sound like (as long as you don't read the LFF programme summary, which gives it all away). The result is a delight from start to finish. If this doesn't win the First Feature award at the weekend, then I must be missing some extraordinary films this year.

There's a delightful bonus at the end, too: because we're seeing the film at Rich Mix, we can pop down the road afterwards to BrewDog Shoreditch to catch the second day of Collabfest, as introduced yesterday. Go to Moblog to find out about our Collabfest beers 5-8, 9-12 and 13-16.