Reviewed today: The Last Movie, That Time Of Year. 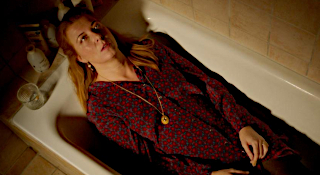 2007! Eleven years ago. At the time of LFF 2007, I'd never visited Denmark, but The BBG and I had just made plans to spend that Christmas in Copenhagen. As part of our research, we went to see a Danish movie, Paprika Steen's comedy With Your Permission - it seemed appropriate, as one of its key locations was the ferry crossing between Copenhagen and Malmo.  The BBG thought it was her favourite film of that festival, and it was pretty high on my own list.

Eleven years later, and things have changed quite a bit. I've been back to Denmark several times, most recently just a few months ago. That crossing between Copenhagen and Malmo has become so famous that it's had a cop show built around it (well, the bridge rather than the ferry). The wave of British interest in Scandi telly means that several of the stars of With Your Permission have gone on to become familiar faces, with Sidse Babett Knudsen even turning up in the Westworld show. And eleven years later, Paprika Steen's finally got around to directing another movie. What took her so long?

For me at the time I saw it, the most important contributor to With Your Permission was Anders Thomas Jensen, Denmark's official Guy Who Writes All The Things, who provided it with a terrific script. This new film is written by playwright Jakob Weis from an original idea by the director, and it's made me reassess how important Steen's direction was - both of the films of hers that I've seen have a brilliantly light touch with the comedy, coupled with a surprising affection for all her characters no matter how terrible they are. And let's make no bones about it, That Time Of Year has some terrible characters in it. It's set over the night of Christmas Eve in the house of Steen's character Katrine, which she shares with her husband and their two kids. They've invited the relatives over for the Christmas meal - Katrine's priestly sister Barbara (Sofie Gråbøl) and family, and all the various grandparents. It quickly becomes apparent that the extended family is a powderkeg of pent-up frustrations and arguments: all we need to do now is throw in an unexpected appearance by a third sister, and stand well back.

It's a comedy entirely driven by character, and one of its most impressive features is the way that all of those characters are firmly established in the first 15 minutes, along with their key flaws and some subtle hints about the secrets they're keeping. From then on, it's just a question of observing the various personality clashes as they naturally arise during the party. Apart from the occasional comic contrivance (an early appearance of Chekhov's Red Cabbage, for example), everything that happens feels completely natural and believable - a combination of sharp writing, beautifully observed performances by absolutely everyone, and the obvious warmth Steen has for all these people. The result is a totally charming comedy, and a joy to watch, and I hope we don't have to wait until 2029 for her to direct another one. 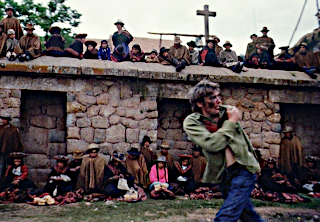 Remember They'll Love Me When I'm Dead from a few days ago, the documentary about a great lost Orson Welles film? I didn't mention it at the time, but Dennis Hopper turns up at one point, and it struck me afterwards how obvious it was that Welles and Hopper would get along. After all, they both had similar careers as film directors: a huge success with their debut, a follow-up that bombed catastrophically, and a lifetime of having everything else they made compared against that debut and found wanting. Welles had the excuse that his sophomore film The Magnificent Ambersons had been ruined by a studio that didn't understand it. With Hopper's second film, The Last Movie (showing here in a new 4K restoration), he proved he was quite capable of ruining it on its own.

That lost Welles film, The Other Side Of The Wind, comes out on Netflix in November, and from the little clips in the documentary there are some interesting echoes with The Last Movie - they seem to share an air of a director trying out any idea that comes to mind, along with a desire to show the business of movie-making and blur the line between that and real life. Here, Hopper himself plays a bit part actor called Kansas, working in Peru on a Western for a director who's either Sam Fuller playing a character or actual Sam Fuller. When the movie packs up and leaves town, Kansas stays there, setting up with local lass Maria (Stella Garcia). We follow his largely inconsequential adventures: hooking up with any Americans passing through town, falling in and out of love with Maria, helping his friend track down some lost gold. Meanwhile, the Peruvian locals have started up a cargo cult of sorts, pretending to shoot their own 'movies' with homemade equipment while they, like Kansas, wait for Hollywood to return.

There's no denying that Hopper's first film had a huge impact on the way movies were made in America, and you can see him here trying to re-use some of the elements that made Easy Rider a roaring success. In some cases, they work - there's a lovely song score that keeps you watching through some of the duller sequences, and cinematographer László Kovács makes the Peruvian scenery look gorgeous. But the semi-improvised feel of this film (despite a screenplay credited to Rebel Without A Cause writer Stewart Stern) all too often degenerates into rambly self-indulgence. As with the Welles film, there's a sense of Hopper shooting anything he could while on location, and hoping it would come together in the cutting room. Legend has it that he sought advice on how to edit all his footage into a coherent whole, but he sought it from Chilean surrealist and lunatic Alejandro Jodorowsky, and that may have been his problem right there.

The Last Movie has developed a reputation over the last five decades as being a bit of a mess, but it's still an intriguing mess to watch. When the film commits completely to careering off the rails in its last twenty minutes, it's got a kind of surreal grandeur to it: the problem is a lot of what happens before then, where it's merely wandering half-heartedly off the rails. In the year that the LFF has finally brought back Treasures From The Archive as a dedicated section in the programme, it's somewhat alarming to realise that this might end up being the only film we see from it.