Reviewed today: Of Love And Law, The Prey, Shadow. 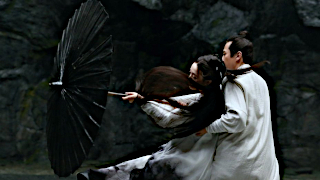 As I said yesterday, there's nothing wrong with Chinese films about people in the olden days fighting each other. Zhang Yimou's been responsible for some of the best in recent years, although he's been going through a bit of a rough patch recently: I was rather disappointed with The Flowers Of War, and didn't even bother seeing Matt Damon problematically saving China in The Great Wall. But if we assume Zhang's been off form of late, then Shadow is definitely a return to it.

It's a story from the classic era of the Three Kingdoms, built around the legends of warlords who had doubles that stood in for them in times of stress. Commander Yu (Chao Deng) of the kingdom of Pei is just such a warlord, and he's been raising Jing (Chao Deng again) from childhood specifically for that role. When the Commander is injured in a battle with the leader of a neighbouring kingdom, he gets Jing in to replace him, using him as a proxy to potentially start a revenge war - something everyone is keen on, with the awkward exception of the king. There's one more problem, though: Commander Yu has a wife (Li Sun), and Jing is taking his substitute role all the way.

This screening has one of the most informative Q&A sessions we've seen this festival, featuring cinematographer Xiaoding Zhao, producer Ellen Eliasoph and - finally! - the woman who modestly introduces herself as 'Tricia from the festival'. It's appropriate that the DP is the main person accompanying the film, because this is an astonishing-looking affair even by Zhang Yimou's high standards. The colour palette is initially restricted almost entirely to black and white, with the only colour element being the flesh tones of the actors, and later on the inevitable splashes of red. Images of duality abound, with the yin-yang symbol a constant presence in ever-increasing size (oh, my tai chi teacher's going to love this one).

As for how it fits into Zhang's canon of martial films: Shadow has as thrilling a story as Hero or House Of Flying Daggers, but it's a more realistic, down-to-earth one. Literally, in fact - you won't see any people flying here, it's largely realistic combat with the occasional balletic mid-air spin. The most innovative element in the action choreography is the use of an umbrella as a defensive weapon: and in a neat touch, it's at its most effective when wielded with 'feminine moves', which seems to mean walking like one of the hookers in a Shaw Brothers movie. A seriously great action thriller melded to visuals like you've never seen before, Shadow instantly becomes my front runner for the Official Competition. (A prize it completely fails to win just six hours later, but you can't have everything.) 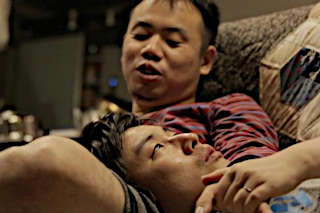 I know I warned you I was going to be seeing fewer films than usual this year: and looking back at the last week and a bit, it would seem that the main thing I've been cutting down on is documentaries, as there aren't as many on my list as usual. Here's one, anyway.

Of Love And Law follows a pair of Osaka lawyers, Masafumi Yoshida (known as Fumi) and Kazuyuki Minami (aka Kazu). They're an oddity in Japan for several reasons, primarily for being an out gay couple in a society that still has problems with people outside of the heterosexual norm. Fumi is the sensitive one who gets over-emotional at virtually everything: Kazu is a singer-songwriter in his spare time and has his mum on the office payroll.

Fumi and Kazu have found that their outsider status draws them to clients who are themselves outsiders, and we get to see them work on a number of cases (within the restrictions on court reporting, of course). The cases chosen here illustrate a number of areas where Japanese social policy could be found wanting. The artist Rokudenashiko, charged with making offensive art out of casts of her vagina (to be fair, using it as the basis for a Fukushima landscape is a bit edgy). A schoolteacher who's been sacked for not standing during the national anthem. We also follow the progress of a couple of the 10,000 Japanese who are undocumented and therefore basically non-persons, because of a mere accident of birth.

Hikaru Toda's film works both as a personal portrait of a couple, and an analysis of the current problems Japan faces. Several people here refer to the concept of 'reading the air' - the way you're expected to keep a close eye on what society thinks, and modify your behaviour to make sure you don't go beyond the boundaries. The film goes some way towards showing how this concept is at heart of a lot of the problems in the country, but also shows that things are changing. Slowly, admittedly - some of the cases depicted here are successful, some aren't - but the situation does seem to be improving. Toda suggested in her Q&A that in the West, we have two extreme stereotypes of how we see the Japanese - either incredibly polite or bizarrely eccentric - and she wanted to make a film that kept away from those two extremes. You could argue that maybe the woman with the Fukushima vagina doesn't quite fit into that brief, but this is still an enjoyable and humane piece of work. 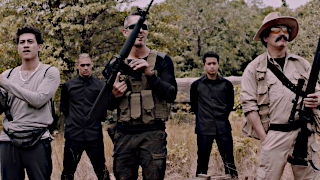 Last year, we saw Jimmy Henderson's Jailbreak, which touted itself as hailed as the first ever Cambodian action movie: an astonishing achievement once you think about the infrastructure that needs to be built from scratch for that to happen. I finished my review with "now let's see what the second one looks like." And here it is, with the same director and stunt co-ordinator (Jean Paul Ly) involved.

As with Jailbreak, there's a very simple story at the core. A corrupt prison warden is selling rich people the opportunity to hunt down and kill prisoners he's released especially for that purpose. We meet the three members of the latest hunting party - one of whom is quite obviously batshit insane - and the small group of prisoners who've been let loose in the forest as prey. Problem is, one of the latter is Xin (Gu Shang Wei), and he isn't exactly your typical prisoner...

It's a story that's been told countless times on screen, from The Most Dangerous Game onwards. But whereas Jailbreak added some new curveballs to the traditional prison riot flick, The Prey is a more standard reworking of its generic plot. Henderson's first film felt like it was made by someone who realised they might only have one shot at doing this, so decided to try to do everything. By comparison, his second one feels a lot more restrained, like it's got less to prove.

That's not to say it isn't impressive - about three quarters of the movie is dedicated to the manhunt, and it's paced beautifully so you don't think too much at the time about how you've seen a lot of it before. But, ultimately, you have. Still, Henderson is beginning to develop a signature style for his films, with a lot of fluid long takes, and still pulling off occasional deviations from the usual genre tropes. Given his stated plans for the followup - something 'weirder' than what he's done before - I'll definitely be coming back the next time the LFF invites him.

Meanwhile, for those of you following our progress on Collabfest 2018, we downed beers 17-20 and 21-24 in the Seven Dials bar before this film, and beers 25-28 in the Soho bar after. (If you click on those Moblog links and they don't work, you'll need to remove the s from https: in the browser bar. I haven't got a better solution than that currently, sorry.) Just one more day to go in each festival, then...