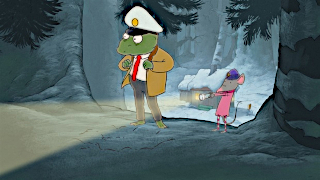 It seems to be our fate that whenever we pay one of our rare visits to a screening in the Family section of the LFF programme, we always end up sitting directly in front of The Worst Children In The World. Never behind them, you understand. The children we're sat behind at today's show are good as gold: silently reading the subtitles or listening to the headphone translation, and maybe occasionally whispering discreet questions to their accompanying adults. Not the little sods behind us, though: they're leaping up and down every couple of minutes, talking at full conversational volume, and I'm pretty sure that at one point one of them drooled directly onto my head. Has the LFF ever considered running separate over-18s screenings for their family films?

This Swedish cartoon, in particular, has some fun elements embedded in it for older viewers. In the forest, law and order is in the hands of a sole policeman, or more accurately policetoad, named Gordon (voice of Stellan Skarsgård). A major crime has been reported - the theft of a squirrel's store of nuts. During his investigations, Gordon meets a mouse called Paddy (Melinda Kinnaman), who seems a bit lost generally, having no home and no job. Gordon decides to hire her as his assistant, and the two of them set out to solve the case together.

The LFF programme notes sell Gordon And Paddy as a Nordic Noir pastiche, and certainly the grizzled veteran/naive rookie dynamic between the protagonists fits that quite neatly. As does the presence of a character known only as The Fox, who's quickly assumed to be the prime suspect. The Fox occupies the role in this story that's normally taken in grown-up Nordic Noir by Muslims, assumed to be the cause of all the problems rather than just trying to get along with life. (This isn't just me projecting: director Linda Hambäck says in her Q&A that fear of the unknown was a minor theme in Ulf Nilsson's original books, and she chose to draw it out a bit more.)

It's still very much a kids' story, and a lovingly told one - slowly paced, brightly coloured, sweetly drawn, and happy to wrap itself up in just over an hour before anyone gets bored. But the parallels with adult cop shows are an added bonus for us grownups, although it may be possible to overstate them. (At one point, Gordon describes Paddy in Swedish as 'bra polis': it's translated in the subtitles as 'a good cop', but I'm choosing to hear it as 'good police' like they say on The Wire.) And it's also delightful to spot the touches that are very much a product of the part of the world where it was made. There's a scene where police chief Gordon insists that someone who takes food because they're hungry hasn't really committed a crime, and The BBG suggests that's the most Scandinavian line you could imagine. Myself, I'm going with the throwaway moment when a child justifies sneaking out of the house without permission by saying "my mummies won't notice." Oh, those Scandis. 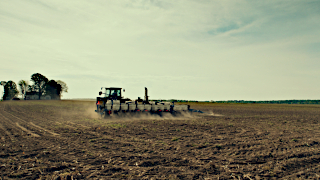 "Thanks for coming out to see one of my shorter films," says Frederick Wiseman in his introduction. And even at 142 minutes, he does have a point: most of the documentaries he's brought to the LFF over the last few decades have clocked in at over three hours. Regular readers will know that we've come to Wiseman fairly late in life: the first film of his we saw was In Jackson Heights in 2015, and this is our fourth. By chance, the three previous films we've seen have all had a New York setting, focussing on a district or an institution. This one, however, goes out to Indiana to concentrate on life in a typical American small town. There's no explicit mention of politics in the film - Wiseman says it never came up in conversation - but the inevitable subtext is that this is the non-urban part of the US that was ultimately responsible for Donald Trump being elected leader of the Free World, and maybe we should be having a look at them.

Wiseman's approach is the same as it always was: train his camera on lots of small slices of life, and then assemble them into a single portrait of the people as a whole. Compared with the New York films, the geographical area he's covering seems a lot more sprawling, ranging from the farms to the main street - as such, it's a little harder than usual to synthesise a single theme out of his assorted snapshots. There are a couple of recurring locations, such as the sports hall, the church and the council meeting room. The council meetings give us the closest thing we'll get to a through line: the ongoing struggle to balance the growth of the town against the pressure on resources. There are frequent guarded references to Homestead, a new build area in town that's become a shorthand for the sort of resourcing problems they're discussing.

But for the most part, it's enough to follow Wiseman's non-judgemental eye where it takes him, watching disparate scenes of people just like the rest of us doing what they do. A school band playing the theme from The Simpsons, and sounding gloriously like the school band from The Simpsons as they do it. A vet performing the amputation of a dog's tail (flagged up in the cinema foyer with an incongruous 'scenes of animal cruelty' trigger warning, which seems inappropriate for a scheduled medical procedure: myself, I could have done with a 'closeups of puckering dog's arsehole as it's being shaved before the operation' warning). And the extraordinary final sequence, a pastor's detailed eulogy to a departed resident, which Wiseman unblinkingly leaves on screen for so long that you change your mind four or five times during it as to whether it's cheesy or deeply touching. It could be the perfect metaphor for what Wiseman does and why he does it. 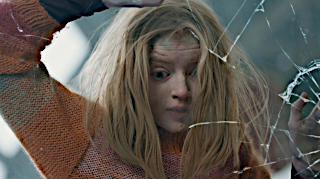 What's the Norwegian for '"how can the same shit happen to the same guy twice?"*

Three years ago - spookily, three years ago to the very day - the LFF showed us The Wave, a rare example of a Norwegian disaster movie, in which geologist Kristian Eikjord (Kristoffer Joner) rescued his family from the tsunami caused by a landslide. I liked it at the time, but was a bit grumpy about how the Eikjords' selfishness was responsible for several other deaths even as they saved their own skins. So I'm pleased to report that this sequel acknowledges that: at the beginning, Kristian is wracked with survivor's guilt and living in an old shack, estranged from the rest of his family. But when he hears about the death of a former colleague following a tunnel collapse, his investigations reveal that the city of Oslo is heading towards a Greek restaurant-style smashing of its tectonic plates. People tell him he's being paranoid - "disasters don't follow you around" - but we know better.

The director of The Wave, Roar Uthaug, has handed over the reins for this one to John Andreas Andersen, whose name just isn't as good. But the writers from the first film are back for the sequel, and they've taken a similar approach to last time: sure, have some sequences of widescreen large-scale carnage for the trailers, but make the real focus of the story is the smaller human drama that comes out of that carnage. The effects team gleefully writes off several Oslo landmarks in the central CGI showcase, but the spectacle is matched by the unbearable tension as Kristian tries to rescue his family from the high-rise hotel they've carelessly found themselves in.

The biggest achievement of The Quake is that having your main cast trapped at the top of a huge photogenic glass tower with unstable foundations doesn't feel contrived at the time. As Andersen pointed out in his Q&A, most disaster movies get the disaster out of the way at the end of act one, so there's more time to deal with the consequences. This film lets you spend half its running time getting to know the characters before throwing everything at them, so those consequences mean much more. Even though part of you is chuckling at the ever-escalating nature of the threat, the other part is digging your fingernails into your armrest willing the characters to survive. It's one hell of a balancing act to pull off, and The Quake does it even more successfully than The Wave did. Although I suspect having the Eikjords go though a third natural disaster in another film would be pushing it a bit.