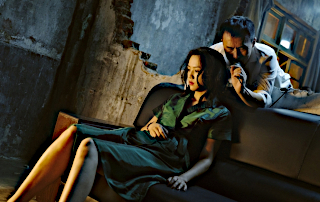 Making us watch a film that's at least 50% dream sequence at 11.20 on a Sunday morning? That's cheating! The slightly woozy nature of this movie ends up being kind of enhanced by my own slightly woozy state of mind, which may have been the point of the scheduling in the first place.

Luo Hongwu (Tang Wi) has come back to his home town of Kaili following the death of his father. In the back of an old broken clock, he finds a photo and a telephone number which starts him on a search for a woman he used to love. We leap without warning between scenes from the past, scenes from the present and scenes that might not be from either, put together with no attempt at chronology. After an hour and a bit, we're fairly uncertain as to what's real and what isn't. And then we're given the signal to put on our 3D glasses, and all bets are off.

Bi Gan's made something that's very much a film of two halves, neither of which is particularly interested in directly telling you a story. But each half has a distinctive look and atmosphere. In the first part, which you could just about convince yourself is a fragmented detective drama, the main thing you notice is the attention to visual textures - peeling paint, cracking plaster, broken concrete. With its lush lighting, this could be a Wong Kar-Wai film, just without as many gorgeous people moping in front of the scenery as usual.

But the second part is the one everyone's talking about - a bravura 55 minute 3D sequence shot in a single unbroken take, which takes the themes from the first half and rearranges them in a variety of unexpected ways. If the first half is dreamy, the second half is positively psychedelic, and gives a new angle to what you've already seen. If you had to make a criticism, you could argue that the second half's less emotionally engaging than the first, because you're frequently drawn out of the story by trying to work out how the hell they pulled off some of the visual coups you see here. But at a pinch, the awe they inspire counts as emotional engagement too.

I can see that Night's refusal to tell a linear story could easily tick some people off no end: but when what you're looking at is so ravishing, who needs a story? 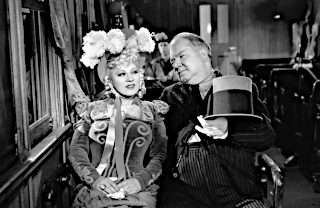 The final line of my review of The Last Movie on Monday was a realisation I literally had as I was writing it: it was the only film that we'd booked this year from the Treasures section of restored classics. (We'd initially tried for a couple of others, but they sold out.) So we had another look at the programme, and managed to find one more archive film we could cram into a free slot. Admittedly, this would eat into the time we'd allocated for our final session of Collabfest 2018. (You can read the live review of beers 29-33 on Moblog, with the usual caveat that you may need to edit out the s from the https: part of the link.) But it meant that on the way back from BrewDog Clapham Junction to this screening, I was able to send this tweet: "About to do one of those fashionable 'immersive cinema experiences' by going to see a WC Fields film while being slightly pissed. #LFF"

Except that as The Belated Birthday Girl pointed out afterwards, My Little Chickadee (directed by Edward F Cline in 1940) isn't really a WC Fields film. He gets joint billing with Mae West for both acting and writing the screenplay, but her name conspicuously comes first on both credits. She plays Miss Flower Belle Lee, a singer who we first see on a stagecoach travelling to a small Western town. Her coach is held up and robbed by a masked bandit, and she's whisked away by him, not entirely unwillingly. When she eventually makes it back to town with ruffled hair and a filthy smile on her face, the townsfolk are outraged, and throw her out demanding she makes a decent woman of herself. Flower decides to do this by marrying the first man she meets on the train, dissolute salesman Cuthbert J Twillie (WC Fields). It's purely a marriage of convenience for Flower, although she could eventually learn to love the big bag of money that Twillie is carrying around with him.

It's a simple idea: take the two stars' established personas - West with her non-stop double entendres, Fields and his constant stream of drunken babble - put them together in the same film, and see what sparks fly. (There's an amusing moment where they briefly try each other's personas on for size.) It's not an even match, if we're honest about it. West is completely in charge here: she gets all the best lines, and is never ever the butt of the joke, whereas being the underdog is a huge part of Fields' schtick. Still, a bit like the two halves of Long Day's Journey Into Night earlier on, it's the contrast between both approaches that makes them so entertaining together. And I bet nobody else is trying to compare those two films with each other today. 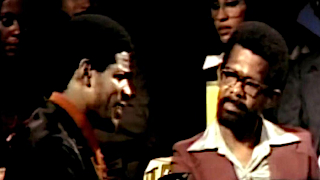 Elsewhere in town this evening, the Closing Gala is taking place: lots of nicely-dressed people watching Stan And Ollie, and hearing the unexpected news that Clare Stewart's sabbatical has turned into a permanent absence. But it's not the final film showing in the festival, as it kicks off at 7pm. Mr SOUL! is the last one playing today, so we're treating it as the real Closing Gala, in the same way that Asako I & II was the real Opening Gala.

We're choosing to finish with a documentary, and I need to go back on something I said in yesterday's review of Of Love And Law, when I suggested that I hadn't seen many documentaries this year. In fact, when you add this one in, seven of the 27 films I've seen this festival have been documentaries, which is more than one quarter of the total. Maybe the different formats of those seven films has stopped me thinking of them all being in the same genre?

This particular documentary is the story of an obscure TV show. Between 1968 and 1973, a public television network in the US made four seasons of SOUL!, co-produced - and after a couple of false starts, hosted - by Ellis Haizlip, the uncle of this film's director Melissa Haizlip (collaborating with Samuel D Pollard). Melissa is at the screening here tonight with narrator Blair Underwood, who at the last gasp gets the award as the most famous person I've seen at a Q&A this year. She describes SOUL! as "the best TV show you've never heard of" - and true, you wouldn't expect a British audience to be aware of a non-network American programme, but it turns out that modern American audiences aren't aware of it either.

The aim of SOUL! was simple: to present the best of black culture to a wider TV audience, at a time where shows on the three main networks were almost exclusively white. Primarily that culture meant music, and as the acts all played live rather than lip-synching there are some fabulous clips here from some huge names. But Haizlip made sure the other arts were represented too - black poetry and dance were both showcased prominently. At the same time, with American society in the midst of a major upheaval, he also got to interview some of the biggest representatives of that upheaval.

The title of this film suggests it'll focus on the man, but it's more of a history of the show, and that seems about right. In the middle of the astonishing audio-visual montage of post-SOUL! black achievement that concludes Mr SOUL!, someone says this: "Service to others is the writ we pay for taking up space on this planet." Haizlip was a crucial force in making the programme happen, but he wasn't interested in being a TV star - his service was to get out of the way and let everyone else do their thing. The film touches on his own personal background (notably how his homosexuality affected his cultural upbringing), but for the most part it presents him in terms of the huge impact he had, and in making sure that that impact will never be forgotten. If nothing else, this excellent documentary finally breaks the curse that typically affects LFF film titles which end in an exclamation mark.

On our way home, The BBG points out that this final day of LFF 2018 has been a perfect microcosm of the festival's range: an experimental Chinese piece, a restoration of a neglected forties classic, and a documentary on some American social and cultural history that you knew nothing about beforehand. (And those films played to three very different audiences: sleepy arty types, aging nostalgics, and a racially mixed crowd of youngsters.) But looking back over the last twelve days, what was best? Well, come back soon for The Wrap Party, and we'll hopefully have made up our minds by then.