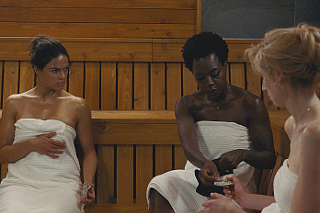 I haven't been to an Opening Gala since 2002's Dirty Pretty Things: as I said yesterday, it's a long-standing tradition. In my mind, it's been replaced by a more recent tradition - going to the cheaper overflow screening of the Gala film the following afternoon. Having said that, a quick bit of research has revealed that I haven't done that since 2009, when I saw Fantastic Mr Fox the day after the fancy screening attended by people in their best frocks. Since then, I've not bothered with the Opening Gala film at all: after all, by its nature it's going to be a big commercial film that'll be turning up in multiplexes soon enough.

The main reason why I'm seeing Widows today after its grand premiere is, I'll be honest, to fill a slot: I have other commitments in the evening, so I have to see something this afternoon, and this is the best-looking option. On the downside, none of the stars who attended last night's Gala can be bothered turning up for this screening: on the upside, I didn't have to participate in a lottery, and it only costs half as much.

I've been reviewing Steve McQueen's films on this site for nearly two decades now: the first one was Deadpan, part of his Turner Prize winning exhibit back in 1999. At the time I said "he's an experimental film-maker who's given up on the traditional methods of theatrically presenting his work" - and then almost a decade later, just to prove me wrong, he made Hunger as his first theatrical feature. He still kept that experimental edge, though, which made him interesting.

One decade and an Oscar for Twelve Years A Slave later, he's now made Widows, a Chicago-set remake of Linda La Plante's fondly remembered eighties telly thriller. The script (by McQueen and Gillian 'Gone Girl' Flynn) adds a couple of layers of political intrigue which I don't believe were in the original, but there's still the same basic core to the story. A gang of armed robbers, led by Harry Rawlins (Liam Neeson), screws up a heist with explosive and fatal results. Their widows, led by Harry's wife Veronica (Viola Davis), are suffering financially as a result, and are left with only one option: to carry on where their husbands left off.

It's a brilliant premise for a crime thriller, and my main concern was that a cerebral director like McQueen would lose sight of the fun to be had with the genre. The opening scene stomps all over that concern: the botched robbery is thrillingly staged, and all the more spectacular for being shot entirely from the viewpoint of the back of the getaway van. Seeing car smashes being almost thrown away in the background of the shot makes them feel more real, and you're totally immersed in the chase from the off.

Sometimes McQueen's directorial flourishes ramp up the tension brilliantly: Daniel Kaluuya's first big scene as the enforcer of one of the warring politicians is all done in one single dizzying take, and you're on the edge of your seat all the way through it. (In a film full of fine performances, Kaluuya going Full Bastard is one of the best: he's come a long way.) Other times, the photography feels like showing off just for showing-off's sake: for example, a conversation inside a moving car, where the camera's locked onto the bonnet and frustratingly never lets us see either of the people talking.

Nevertheless, the performances and the less distracting bits of direction keep the story chugging along wonderfully until the climactic heist. But right at the end, McQueen and Flynn totally fail to stick the landing: the whole thing's wrapped up in an undignified scramble in which several loose ends remain irritatingly untied. It's as if the writers are assuming we'll forget most of the jeopardy that's been keeping the film ticking over, just because we've had an entertaining robbery scene. The plot holes in the final reel (you know, if we still had reels) undo a lot of the good work that came before. Widows is still a fine Saturday night out if you don't think about it too hard, but I never had McQueen down as a filmmaker who'd use that as an excuse until now.

(Yeah, that's all you're getting today, sorry. I warned you the coverage was going to be cut down a little this year. There should be two or three reviews each day for the rest of the festival after this, though.)