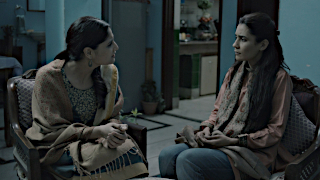 Cineworld Leicester Square. Curzon Soho. Embankment Garden Cinema. Odeon Tottenham Court Road. Picturehouse Central. Prince Charles Cinema. Vue West End 5. Vue West End 6. Vue West End 7. BFI IMAX. NFT1. NFT2. NFT3. BFI Studio. Ciné Lumière. Curzon Mayfair. ICA. Rich Mix. This year's LFF is spread across eighteen different London cinemas, and - if everything goes to plan - by the end of all of this I'll have seen films in sixteen of them. (The exceptions are the Cineworld and Picturehouse, where the ongoing pay dispute means we're continuing to boycott them - and doing it properly this time, rather than buying a ticket but not crossing the picket line like we did last year.)  As a result, we're getting to see films in a wide range of room sizes, and today marks the extremes of that approach.

Our day starts in the Studio, which is BFI Southbank's tiniest room - a forty-seat screen which, thanks to brilliant design, is actually the second nicest cinema in the BFI complex (assuming you can get into it). In the old days, when you had to build an auditorium around a full-sized film projector, you'd be lucky if the screen in a forty-seater was much bigger than that of a large telly, but digital projection makes small rooms with large screens much easier to pull off now. Which makes it all the more ironic that Soni opens with the Netflix logo, suggesting we'll be able to watch it on a telly screen soon enough. (They didn't mention that in the programme listing for the film, which is a bit of a surprise.)

Ivan Ayr's film is the first one we've seen that's eligible for this year's First Feature award (we're due to catch another one in a couple of days). Its title character, played by Geetika Vidya Ohlyan, is a female officer in the Delhi police. She's good at her job, although prone to flying off the handle under provocation. And she gets a lot of provocation, because if this film is to be believed, all Indian men are lecherous scum. Unfortunately, a lot of the men she deservedly smacks in the gob turn out to be the relatives of high-ranking officials. This becomes a problem for her boss Kalpana (Saloni Batra), who's got her own problems with being a woman in the force, but for the opposite reason - she's perceived by management as being too soft, rather than too aggressive.

It may be deliberate that the opening scenes of Soni getting into fights give you slightly warped expectations of what the film will be about. This is less of an action-packed cop drama and more of a character piece, pointing up the contrasts between Soni and Kalpana, and showing how their approaches to both policing and personal life gradually affect each other. As if to mock anyone who's expecting a traditional police procedural, some of the scenes are almost aggressively slow - Ayr's quite fond of long unbroken takes where very little appears to be happening on the surface. But once you've settled into its deliberate rhythm, this is a rather fine social study, where the anger at the current state of Indian society is palpable without becoming too preachy. 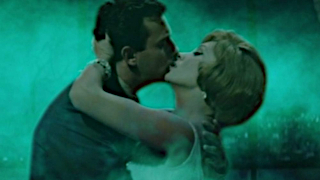 With a short pause in between (during which we visit the rather lovely Remembering Great Apes photo exhibition I mentioned at the start of the month - try to catch it before it closes on October 27th), we go from one extreme to another - from the tiny BFI Studio to the massive BFI IMAX. I'm always fascinated by the way the LFF uses its IMAX screen: most of the time they show the sort of spectacular flicks that are the format's bread and butter, but they'll also use it to give obscure art films the sort of seven-double-decker-bus-sized canvas they wouldn't get to see otherwise. That's kind of the case here, with a double bill of films made by the trio of Guy Maddin, Evan Johnson and Galen Johnson.

I wasn't thinking of it as a double bill when I first went in, but I'm going to review it as a double bill for one simple reason: this programme consists of an hour-long feature preceded by a short, and the short was better. Accidence is a music video for a song by Ensign Broderick, shot in a single take, consisting of a wide shot looking at an entire apartment block's balconies and the events taking place on them. The comparison point everyone makes is Rear Window (for reasons which will become clearer once we get to the main feature), but it also brings to mind the ridiculous amount of detail buried in Garth Jennings' video for REM's Imitation Of Life, and the loopy experimentation of Zbigniew Rybczyński's Tango. The trailer I've linked to gives you only the tiniest hint of how huge the scope of the film is, and how complex the interweaving narratives get - and by the time you've realised that, the film's nearly finished. It's a short that demands multiple viewings, and it makes me sad that I'll almost certainly never see it on a screen this size again.

The Green Fog, on the other hand, wasn't designed to be seen on a screen this big - it's made up of hundreds of clips from old movies and telly, so you learn a lot over the course of its 63 minutes about how film and video grain have changed over the decades. It started out as a commission from the San Francisco film festival, which asked Maddin and the Johnsons to make a film celebrating the city. They started out with the simple idea of a collage film made up of movie clips shot in San Francisco, but then came up with another complication: as the most famous film to come out of the city is Vertigo, could they use those clips to somehow remake the Hitchcock classic? So the clips follow the basic structure of Vertigo, either revisiting its original locations or coming up with incidents that vaguely match the plot.

Thankfully, we saw Vertigo again just a couple of months ago on its 60th anniversary re-release, so the film's structure is still fresh in our heads. (God knows how this film looks to someone who hasn't seen the original.) And for movie fans, there are two layers of fun to be had - recognising where the clips originally came from, and spotting the parts of Vertigo that they reference. Occasionally the two overlap, such as when you discover exactly how the final shot of the 1978 Invasion Of The Bodysnatchers would fit into Vertigo's plot. And there are several other great running gags, such as a series of sequences in which all of the dialogue has been edited out of a scene, leaving just closeups of two people silently gurning at each other. Plus, as with other collage films like Los Angeles Plays Itself and Have You Seen My Movie?, there's the illicit thrill of realising that nobody's actually given the directors the rights to work with this material. ("Legally... we have a lawyer," says one of the Johnsons when asked about this.)

The only real issue I have with The Green Fog is that even at just over an hour, it ends up overstaying its welcome, with some individual sequences dragging out much longer than they really need to. (Yeah, Chuck Norris, I'm looking at you.)  It's fun enough to watch at the time, but I wouldn't be desperate to see The Green Fog again. Accidence, on the other hand... 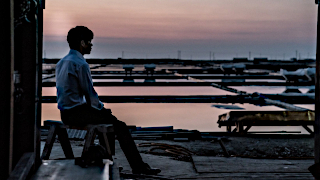 Still in the IMAX, but this is more the sort of thing you'd expect to be seeing in here - a crime thriller with lots of shooting and explosions. Well, a few, anyway. And it's Korean. But apart from that, it's a film that was built for a screen this size. It's slightly unnerving when we find out that the box office has put us in row D, meaning you have to turn your head to see all of the screen, but we don't end up blind or deaf or anything.

Won-ho (Cho Jin-woong) is a cop who's become obsessed with catching the mysterious big boss behind Korea's drug trade, known only as Mr Lee. (Well, that narrows it down.) When one of Won-ho's informants is brutally murdered, he takes it badly and doubles down on his pursuit. Eventually he catches a break when he encounters Rak (Ryu Jun-yeol), a young employee of Lee who's willing to turn double agent. Won-ho puts together an elaborate and dangerous scheme to trap Lee by playing off Korean and Chinese gangsters against each other.

We've actually seen this plot before: Believer is based on Drug War, the Hong Kong film by Johnnie To that was the hit of the 2013 Terracotta Festival. Director Lee Hae-young is keen to present it as being merely inspired by the original - "I wouldn't remake a Johnnie To film, I'm not crazy." There's a lot of overlap between the two films at the start, notably the pair of meetings with the two sets of gangsters that's a beautifully constructed setpiece at the centre of the plot. But To's film takes a breathtakingly dark turn towards the end, and Lee's version - while being far from all sunshine and flowers in its final scene - steps back from that level of bleakness.

Also, it's significant that Believer is about the drug trade between China and Korea, while Drug War straddled the border between China and Hong Kong, which has much more baggage attached to it. One of the things that made To's film so great was that while working within the restrictions of a China-Hong Kong co-production, he managed to make the film largely about the relationship between the two countries, and the things that change when you cross their physical border. Believer, you suspect, wouldn't look or feel very much different if China was replaced by any other South East Asian country with an interest in narcotics, and it becomes a lot more generic as a result.

But this is what Lee was trying to avoid - having his film compared with the stone-cold classic it was based on. And taken on its own terms, Believer is a solid and gripping piece of entertainment. It's visually stylish, with some swish use of drone photography for the establishing shots, and its sense of pacing is second to none: the bursts of action are carefully spaced out, but when they happen they don't hold anything back. I was also pleased to spot one of my favourite Asian cop movie clichés: the bad guy's retinue of bodyguards contains one female member, for no reason other than it gives the policewoman in the team someone to fight at the climax. (Although, to bring us back full circle, apparently that doesn't seem to be a problem for Indian policewomen...)