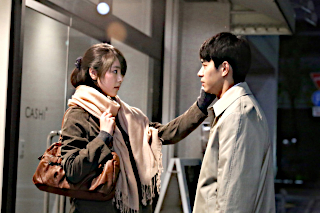 It's Opening Gala night at LFF 2018. This year, they're having a random draw to decide who gets tickets to see Steve McQueen's Widows. Bee Eff Dee: I did that myself for an Opening Gala nearly a quarter of a century ago, and my draw was more exciting because I held it outside the cinema half an hour before the film started.

Anyway, as has been the case for quite a few years now, I'm skipping the Gala and seeing another film instead. In fact, given that it's chronologically the joint first screening being held this year (starting a full hour before Widows), you could make a claim for Asako I & II being the real Opening Gala. The only thing stopping it being treated as such is the small detail of it being a Japanese movie made by people nobody's heard of.

Except you have heard of Ryusuke Hamaguchi, or at least you would have if you were here three years ago when his film Happy Hour played at the festival. The main thing everyone remembers about that one is that it was five and a quarter hours long, which tended to overshadow anything else you might think about it. By comparison, this is a much tighter affair, and gives you a better feel for what Hamaguchi's strengths are beyond an ability to structure a complex story. Having said that, the main idea at Asako's core is just the sort of thing that could lead to structural shenanegans, particularly as the title suggests its lead character's story will fall into two clearly defined parts.

Asako (Erika Karata) is a very typical young female character from a Japanese movie: quiet, unassuming, a frustratingly blank cipher. You spend the first half of the movie willing her to actually do something, which makes it all the more ironic that later on you're yelling "no, I didn't mean do something like that..." The catalyst for her change is Baku (Masahiro Higashide), a very typical young male character from a Japanese movie: scruffy, reckless, a bit inarticulate. The pair meet in the cutest of all possible meet-cutes, and they fall head over heels in love, despite Asako's best friend warning her that he's trouble. She's right: one day, Baku goes out on an errand and never comes back. A couple of years later, Asako's working in the city in a coffee shop, and suddenly encounters Ryohei, a charming salaryman who looks exactly like Baku. Is it wrong for her to fancy him?

Based on a novel by Tomoka Shibasaki (yep, Japanese cinema still has trouble finding new stories of its own), Hamaguchi's adaptation is determined to wrongfoot the audience at every possible turn. It starts out with very small reversals - a series of photographs you assume are of Asako turn out to be from an exhibition she's looking at. But as the plot progresses, the reversals get exponentially bigger. The revelation that it's a period piece of sorts is jarring, though just about forgivable: but a couple of the later hairpin bends in the plotting threaten to derail the story altogether.

Despite those concerns, Hamaguchi and the cast work like crazy to keep us emotionally involved with these characters, not just treating them as a series of puzzle pieces to be moved around. That involvement manages to carry us over the potentially problematic climax to a realistically awkward, yet satisfying, conclusion. Asako's not perfect, but there's enough goodness in there to make it worthwhile, and that description applies to both the character and the film.