Reviewed today: Being Frank, The Man Who Killed Don Quixote. 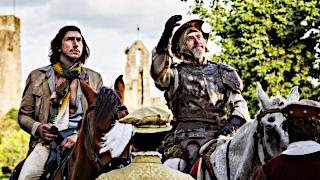 It's even boasted about in the opening titles - 'over 25 years in the making (and unmaking).' Terry Gilliam's Don Quixote film has, over the decades, become the classic example of a movie project that's collapsed repeatedly due to a combination of mismanagement and bad luck. One of his previous attempts at filming it even spawned its own feature-length documentary, Lost In La Mancha. In the time it's taken him to complete the project, two of the actors he cast as Quixote have died (this film is touchingly dedicated to Jean Rochefort and John Hurt). Even as the finished film is playing the festival circuit, it's still got problems - ongoing arguments about who owns the rights, and no UK distribution yet in place.

Over the last quarter of a century, one thing has been constant - Gilliam's attempt to somehow bring together the fictional story of Don Quixote and, for want of a better description, the real world. The way he's finally settled on doing that is by telling the story of a film director called Toby (Adam Driver). As a student, Toby travels to Spain to shoot his own version of Quixote, casting the old shoemaker Javier (Jonathan Pryce) in the lead purely because he likes the look of his face. A decade later, Toby is back in Spain shooting commercials, and nostalgically decides to revisit the site of his earlier movie. Happily, Javier is still alive: unhappily, he's now convinced himself that he's the real Don Quixote. And as this is a Terry Gilliam film, that delusion proves to be somewhat infectious.

No movie could stand up to the years of anticipation that Quixote has racked up. Certainly not a Gilliam movie, given his up-and-down form over the time it's taken him to make it. At the very least, you could argue that this is the least incoherent film the director has made in quite some time. The scenes of yelling and chaos that he considers to be his trademark, and that I consider to be his key weakness, are actually relatively few and far between here. His visual extravagance is still there, of course, but it's used as the backdrop for scenes that are more carefully worked out than usual, possibly a happy consequence of the extended development period. He's helped a lot by the two main performances: Driver works wonders given the multiple levels of reality he has to negotiate, while Pryce is at his best dropping hints at the vulnerability under the bluster of Quixote, less so when he's diving headfirst into an Old Timey Shakespearean Mad Scene.

There are still flaws here, inevitably. The supporting performances around the central pair frequently fall back into the usual Gilliamesque grotesquerie. There are bits of the script that may have worked when Gilliam started writing it, but really don't work now - curiously old-fashioned routines about Eddie Cantor, and positively neanderthal attitudes towards women and Muslims. But Quixote tickles the eye and the brain enough times to make it a decent enough addition to the filmmaker's canon, if nothing else. Because even now, that's all that it will really ever be: the film that Gilliam was famous for not making for a large part of his life. Maybe now, he can finally move onto something else and make another great film? While there's still time? 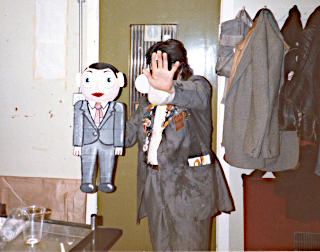 The director of Being Frank, Steve Sullivan, was in the seat in front of me at this screening. I managed to have an exclusive chat with him just before the film started, and I'd like to share it here with you now.

SULLIVAN: Can you see okay over my head?
SPANK: Yeah, I'm fine, thanks.

That may well be the nicest interaction I've ever had with a film director in 30 years of attending the LFF.

Sullivan - like me - was brought up in the Granada TV catchment area, and so - like me - thought that the existence of Frank Sidebottom was a perfectly natural thing. I had no real idea until I moved to London that he was even known outside the north, until I went to a couple of Sidebottom gigs in the capital and found them reassuringly packed full of likeminded people. I was vaguely aware of where the character had come from, and even owned the odd record by his creator. But there are a lot of gaps in my knowledge, and Sullivan's film - assembled largely from hundreds of hours of archive material hidden in an attic - does a terrific job in filling those gaps for anyone who's interested.

The man behind the character was Chris Sievey, but many of us knew that. He was a presence on the Manchester music scene during the punk and new wave years, embracing the DIY ethic wholeheartedly by making his own cassette albums and selling them personally to anyone who'd listen. His band The Freshies had at least one perfect pop song in their repertoire, but it wasn't a hit because there was a strike at Top Of The Pops the week they were due to go on. Despite his inventive self-promoting gimmicks - my favourite being a single with a ZX81 computer video on its b-side - Sievey just couldn't get the break he craved.

And then came the bit in the middle that I wasn't aware of at the time: Sievey built himself an oversized papier mache head, called himself Frank Sidebottom, and did a comedy act as the support for his own music gigs. Over the years Frank took over completely (which is when I got to hear about him), spawning an entire universe - records, comics, concerts, telly appearances, and a backing band that at various times had both Mark Radcliffe and Jon Ronson as members. I use the word 'universe' advisedly, because every aspect of the character of Frank was scrupulously maintained by Sievey, whose real persona dropped out of public view altogether. His efforts to keep Sidebottom and Sievey separate would take their toll on his family, his health and - as strongly hinted here - his sanity.

Sullivan's film has a defined three act structure, and the first two acts - the Sievey/Freshies years, and Sidebottom's rise to fame - are illustrated with copious hilarious clips, along with affectionate interviews with friends and family. We transition into the third act via a genuinely shocking outtake from a TV shoot, marking the point where the story gets an awful lot darker. Sidebottom's chirpy character was always a hair's breadth away from mental collapse - there's a glorious clip here of him performing Twist And Shout, where the 'aaaaaaaahh aaaaaaaahh' bridge keeps rising in pitch and volume, escalating into a whole minute of arhythmic primal screaming, before cheerily dropping back into 'well shake it up baby now'. Offstage, Sievey was proving himself less capable of returning to the chorus.

It's a tale that could have descended into awkward sentimentality, but Sullivan stays clear-eyed throughout, and the final section - where Sievey attempts to pull himself back on track with a carefully worked-out five year plan - is genuinely uplifting, even if you know how it ended. This is nothing like Frank, the Lenny Abrahamson film from a few years ago based on Jon Ronson's time in the Sidebottom band - that could have been about any American indie kid with a gimmick. The real Frank was a true English original, pulling in influences from a century of popular culture and bringing them together in a performance which did something I think nobody else has done: he took the piss out of the entertainment industry, while making sure the only other people in on the joke were the audience.