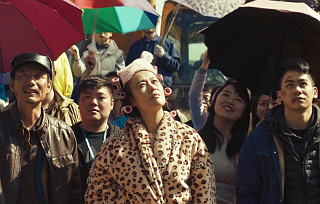 Although I only saw 25 films this year, it turned out to be a very good festival – at least as far as the choices we made. Only one actual bad film among the 25 – Two Plains and a Fancy – and even that looked pretty: and one total mess of a film – The Last Movie – but one which was known for it, so I was seeing it in part for historical interest. A few others that didn't live up to what I had hoped, but none so badly that I feel the need to call them out.

Going back to that top 5, a particularly strong showing from China this year. Dead Pigs in the end topped a very strong list for its combination of humour, warmth, social interest, complex and well-rounded characters and an unexpected and joyous climax. That Time of Year came close to giving my top spot to Paprika Steen for the second time with the second of her films I've seen: well-written, with an ensemble cast each and together giving terrific performances, and a carefully controlled tone throughout, even when the humour gets particularly dark. Initially I was sceptical about Long Day's Journey Into Night, but rather than being pretentiously experimental, as I had feared it might be, it played perfectly on that edge between dream and reality, and the bravura 3D single take sequence to finish felt earned, not gratuitous. But for sheer visual style, Zhang Yimou's Shadow managed to pip it to 3rd place. Finally Mr. Soul! not only told a fascinating story I felt I should have already known, it also made a hugely entertaining end to the festival.

The 3 films which just missed out on the Top 5 were all also terrific. But to be honest, quite a few others were, too, but for fear of listing almost everything I saw, I thought it best to stop there. In terms of the spread of films I saw (ignoring entirely the spurious categorisation the LFF started to use when Clare Stewart came in – wonder if it will get dropped again now she's run away...), I saw 5 documentaries, 2 archives, and 18 contemporary fiction features (although one was accompanied by a short which was better than the feature...). Bit of a low number for the archives this year, but I did miss out on a couple I'd tried to get tickets for: but with a fifth of the films I saw being documentaries, and two of those making it into my top 8, still a strong showing for those. Didn't get to any talks this year, which is a bit of a shame, and it feels like not that many people turned up for Q&As with the screenings either, although the Q&A with the cinematographer at Shadow was particularly fascinating.

All in all, from the films I saw, a very good LFF this year, and if that's in any significant part down to the temporary stewardship of Tricia Tuttle, it bodes well that she's now taking it over officially. We'll wait and see whether she makes any noticeable changes from next year, now she knows she's not handing back the reins.

Here's how my selections for the year break down under CSCS (the Clare Stewart Classification System):

Fairly well balanced, I guess, with a slight bias towards thrills and whatever the hell Journey is meant to cover. And as far as the other hot topic of this LFF goes, eight of those 27 had female directors - a bit short of the 38% offered by the festival overall, but an improvement nonetheless. Those eight films included both the best and the worst ones I saw this year. Observe:

Bottom 1:
- Two Plains And A Fancy

A good year for China, it has to be said, with three very different movies in my top five: a smart satirical comedy (Dead Pigs), a classical tale of swordplay and court intrigue (Shadow), and a dreamy bit of arthouse noodling (Long Day's Journey Into Night). Of the rest, Being Frank is a lovingly assembled tribute to a uniquely British artist: The Quake is a brilliant example of genre cinema that any audience could enjoy as long as they can get past the subtitles: and Accidence is a nine-minute short film with more story and invention than several of the features here could manage. (That especially goes for Two Plains And A Fancy, but let's not dwell on that.)

So, with another London Film Festival out of the way, let's close with some thank yous. To The Belated Birthday Girl, for the usual: to Spank's Pals Lesley, Lee, Sue, Diane and Stephen for coming along for the ride: to Jon and Elizabeth, with commiserations to them for missing out on the films this year owing to Jon crocking his leg (get well soon!): to Phil and Matthew, as well as those former members of the MostlyFilm crew who haven't appeared in a film this year: and to Tricia Tuttle and her team for making my thirtieth LFF such a pleasure to attend.

Finally, of course, congratulations to Tricia for her full-time appointment to Festival Director, the fifth person to hold that role in all the time I've been going. What's going to change next year as a result? Will the films be recategorised in the all-new Tricia Tuttle Taxonomy Table, or TTTT for short? I fully intend to come back here in twelve months to find out. Being a monkey, and all.