Home Archives/Categories About Me RSS Feed Mailing List Email
Living For The Weekend: A 2019 Diary By The BBG
Simian Substitute Site For February 2019: Valentine The Spider Monkey 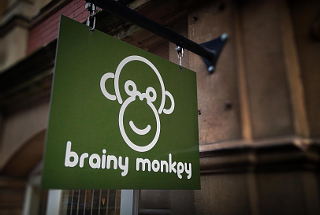 Comedy: Happy New Year to one and all! (Now buy a diary.) As has been our tradition over the last decade or more, we saw out the old year with a stand-up comedy show. There was plenty of competition in North London for our business this time round, with Good Ship Comedy joining in for the first time, marred only by their venue's insistence that the show wrapped up at 9.30pm to allow more time for the purchase of booze. Monkey Business could have been on our list too, but after the emotional rollercoaster of their previous NYE show we felt that might be a bit too risky. So in the end the Pals and I settled for the familiar comforts - and, let's be honest, familiar jokes - of Ivor Dembina and his Hampstead Comedy Club, this year temporarily relocated at the Albany pub, as it was three years earlier. It was a splendidly balanced quadruple bill - the verbal dexterity of Dan Evans, the eye-watering filth of Arielle Souma, the too-rude-for-Radio-4 songs of Ant Dewson and the previously-seen-in-late-2016 rants of LJ Da Funk. The twin-DJ set in the upstairs bar leading into 2019 had its moments, but they kept playing music that was recorded before either of them were born, and claimed never to have heard of Janelle Monae. Millennials, eh?

Food and Drink: One of our biggest achievements in the year just gone was the creation of www.bermondsey-beer-mile.co.uk, in which The Belated Birthday Girl and I planned to keep a regularly updated record of all the bars currently operating on Sarf Landan's most fashionable pub crawl. It's been quite the success, I have to say: it's currently getting ten times as many page visits as this bloody place does, with amusingly sharp peaks in the hit count every Saturday, suggesting that Beer Milers are actually using it for real-time navigation. It also comes first on a Google search for 'Bermondsey Beer Mile', despite us putting zero effort into search engine optimisation. The one thing we've been a little behind on is those regular updates, although even then comments from helpful readers have helped ensure that the biggest recent changes have already been documented somewhere on the site. Anyway, early in December we went on another fact-finding mission (hic), and the site's had a bit of an update as a result. The main things we've covered are the new bar from Cloudwater, and the reopening of London Beer Factory's The Barrel Project after a lengthy period of refurbishment. I've also replied to the various comments left during our first six months of operation, and only been rude about one of them.

Telly: The ancient Christmas Day tradition of slumping in front of the telly after a massive feed took a new twist this year, as we found ourselves on Christmas night in a hotel room with a Smart TV featuring the Netflix app. I've only ever used Netflix on computers before now, and it's terrifying how addictive the TV version of the interface is by comparison: you could burn up hours just scrolling through looking for something to watch, and on one occasion we did just that. Eventually, though, we settled for a double bill of Netflix Original productions that overlapped in unexpected ways. The Christmas That Almost Wasn't started out life as a 1966 Italian movie in which Santa Claus is about to be evicted by a Scrooge-type landlord, and has to seek the aid of a lawyer: what could be more festive than that? Well, everything could, which is what makes it prime material for a Mystery Science Theater 3000 reworking. Released as a Christmas special as part of their 2017 comeback season, it has Jonah and the bots cheerfully attacking all the obvious targets - the bad dubbing, the worse songs, and the jaw-dropping horror of the special effects at the climax. To be honest, the CGI effects in Netflix's current seasonal offering The Christmas Chronicles also have a bit of a will-this-do quality to them, but that's all part of the tongue-in-cheek approach: taking a similar Christmas-in-crisis storyline to the earlier film, but gently mocking it with every directorial decision it makes, starting with the casting of Kurt Russell as Santa. It's good-natured enough to tickle the same parts of your post-food coma brain as, say, a good Doctor Who Christmas special would: and if you're prepared to cut it the same amount of slack, there's plenty of fun to be had all the way up to the cheeky cameo in the final scene.

In the meantime, your Simian Substitute Site for January 2019 is Brainy Monkey. Our Christmas Day adventures with a Netflix-enabled telly took place in a hotel in Cardiff, and at some point in the near future I'll write a bit about what that was like. It was during the walk to our Christmas dinner that we encountered an office with the sign for Brainy Monkey outside, prompting The BBG to note what a nice change it was to find a company name of the format '{adjective} monkey' where the adjective wasn't a negative one.

Anyway, there was nothing on the office to make it clear what these people actually did, so it wasn't until we got back to our hotel and Googled them that we discovered that Brainy Monkey is a post-production house for film and TV. They boast on their website that "its staff have worked on a variety of programming, from City Hospital and Teletubbies for the BBC to Penis Envy for TwoFour," and you just know that someone on their web team went to work one morning with a smile on their face as they thought "I'm going to write that sentence today." Anyway, they've got a groovy collection of editing facilities, and the website will tell you all about those too.

As for what's happening here in the first month of 2019: well, probably a bit of post-Pick Of The Year admin, some more about what we did in Cardiff over Christmas, and yet another bit of BrewDogging. Can't really say too much more than that, as the Pals and I are heading out now for our New Year's Day lunch and movie, which is one of our favourite things to do. Feel free to leave your New Year wishes, or whatever, in the comments box below.