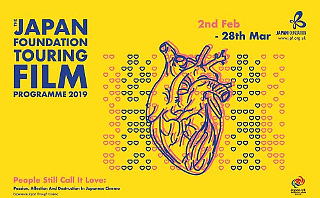 The Japan Foundation has been taking its Touring Film Programme of newish and classic Japanese cinema around the UK since 2004 - and I've been writing about it every year since 2008 (apart from 2009, for some reason), either in these pages or over on MostlyFilm. Back in 2008, it was a six film programme, and now it's grown to seventeen plus a bonus ball. I'll tell you upfront that I won't be reviewing all of them this year. Partly it's down to pressure of work: partly it's down to not getting all the freebie preview discs that I used to back in the MostlyFilm days. But it has to be said that quite a bit of it's down to the ICA, still the home of this tour in London. In the past year, they've dropped most of the discounts you used to get for being a basic level member, and made it even harder to book multiple tickets than usual thanks to their shittily redesigned website.

Still, none of that is the Japan Foundation's fault, so let's not take it out on them. But this is why, out of the seventeen films in what they've chosen to call People Still Call It Love: Passion, Affection and Destruction in Japanese Cinema (or #JFTFP19 for short), we only got to see a mere twelve of them during their now-finished London run. Six on one weekend, then six the next. Here's what the first weekend looked like. 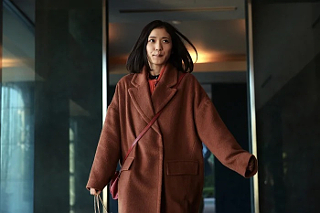 We start with Tremble All You Want, the story of twentysomething office lady Yoshika (Mayu Matsuoka). Her entire romantic career to date comes down to a single schoolyard romance, maintained almost entirely in her head, with a boy she's chosen to call One. But then she's propositioned at work by a lad she's chosen to call Two. Should she take him up on his offer, or should she take this as a sign that she needs to get back to One again? Or, more dangerously, do both?

Thankfully, it's clear from quite early on in Akiko Oku's film - as Yoshika pours out her heart and soul to half a dozen mates from various walks of life - that we're not meant to be comfortable with everything she does in the name of love. Which is great for me, as the grey area between Stuff People Do In Romantic Comedies and Actual Mental Illness has been a rich seam for the four years that Crazy Ex-Girlfriend has been on telly, and this film overlaps with it in several places. (Though it took The BBG to point out one overlap I'd somehow missed, which is that this film even has a musical number at one of its emotional peaks.) There's a glorious performance by Mayu Matsuoka at its core, and a terrifically solid handling of tone throughout that makes it one of the smoothest emotional rollercoasters you'll ever ride.

Where Chimneys Are Seen is where we encountered Phil from the former MostlyFilm in the audience: but as this was a) this year's archive screening, dating back to 1953 and b) screening on 35mm, it wasn't that much of a surprise. It's a lovely time capsule of post-war Japan, set in a tatty bit of town away from the bustle of the city. People are doing what they can to get by, but are still twitchy enough to flinch when a bit of sunlight reflects off a mirror, thinking it might be the Americans bombing them again. The film starts off in a highly picaresque fashion, with self-aware narration over an incredibly mobile camera, but eventually settles on the four people sharing one particular house: a middle-aged couple, and the two younger people lodging in their upstairs rooms. They're all just about getting on with their lives, but the sudden appearance of an abandoned baby in their living room changes that.

It's a very theatrical piece - it's largely set in the couple of rooms of the house, and repeatedly hammers home the symbolism of the metaphor embedded in its title. But director Heinosuke Gosho provides enough cinematic flourishes to make it work as a film, especially in the sound: the opening is particularly impressive, gradually building up the cacophony of daily life in the area, temple drums, multiple radios and all. Some of the translation work makes things confusing - notably the initial suggestion that the wife has had a baby without her husband noticing - but it all comes together at the end. 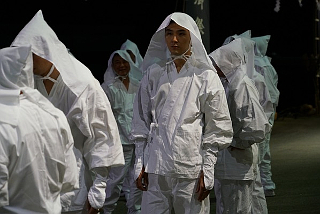 If there's one thing I've learned from a decade or so of these programmes, it's that the Japanese are quite fond of films built around theoretical points of civil order. Daihachi Yoshida's The Scythian Lamb is a good example, telling the story of one town's social experiment: newly paroled criminals are being secretly rehoused in the community, in an attempt to populate rural areas where the oldies are dying out too quickly. There's no way that can fail as a cure for rural depopulation, is there?

For a large part, this works as a dark satirical comedy. As Hajime (Ryo Nishikido), the civil servant put in charge of the project, is told the arcane rules of the experiment - notably that none of the six criminals involved are to be made aware of each other - you're primed for the moment where it could all go wrong. And in the early part of the film, it's actually quite subtly done: especially how Hajime only finds out part way through the sort of criminals he's dealing with, and the way his attitude changes after that discovery. But the plot escalates in sillier and sillier ways to a berserk climax, which might have just worked if it hadn't been preceded earlier by a massive Foreshadowing Dump that basically tells you exactly how the film is going to end, if not how stupidly it's going to play out. Also, don't cast someone as famous as Ryuhei Matsura in an apparently throwaway role and not expect us to suspect something.

Those three films there made up our Saturday programme. Unfortunately, thanks to the Bakerloo line falling apart, our Sunday began with us getting to our first film - Destiny: The Tale Of Kamakura - a good ten minutes after the start, leading to an experience very similar to that encountered by the female protagonist Akiko (Mitsuki Takahata). As we joined the film, she was coming to terms with having married writer-cum-psychic-investigator Masakazu (Masato Sakai) in haste, and only just starting to realise what her life has become. For one thing, she's moved to his home town of Kamakura, where humans, monsters, ghosts and gods all coexist in the same space. For another, she soon learns that not all of them get on with each other.

This is an adaptation of a long-running manga, and it shows - it's got the episodic feeling of a writer trying to cram in all their favourite bits of a massive series into two hours, leading to a very disjointed narrative. The adapter is Takashi Yamazaki, who's also credited with direction and special effects: that last credit may seem like a red flag, but it turns out that the visual style is the key to making this wild story work. Thankfully, he doesn't drown you in CGI from the word go, keeping the effects work down to some charming subtleties in the background details. It's not until the third act that an entire other world is hurled into your eyes in one fell swoop. But by then, the film's earned the right to a bit of visual extravagance, and the inventiveness of its concept is as good as its execution. 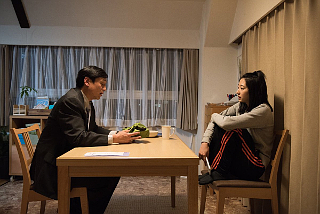 I've said it before, and I'll say it again: nobody ever went broke making a Japanese movie about food. Mind you, Dad's Lunch Box - based on a social media thread that grew into a book - isn't your typical foodie flick. It's a simple story: a newly-single father has to start making bento packed lunches for his teenage daughter, initially isn't very good at it, but gradually gets better.

Phrased like that, it feels like a short film plot, and director Masakazu Fukatsu wraps up that part of the story in about half an hour - the rest feels a bit like padding to make it up to the bare minimum for feature length. Sure, it's done with reasonable charm, and has the unusual quality of having to make the meals in its first half look unappetising, presumably the work of a food unstylist somewhere. But we've had a bento-based film in these programmes before - Noriben: The Recipe For Fortune in 2016 - and that one was better.

If there's one trend that comes up even more frequently than food in these programmes, it's over-emotional depictions of terminal illness. It's been a couple of years since the genre last popped up here, but Her Love Boils Bathwater brings it back with a vengeance. It's galling that Japanese cinema keeps coming back to the plot of someone trying to complete a major project before they die of cancer, because Kurosawa made the definitive version with Ikiru and strictly speaking nobody else needs to bother. Here, it's a middle aged mother (played by Rie Miyazawa) who's been given months to live, and decides to reassemble her estranged family - plus a few other hangers-on - to reopen the public baths that her ex-husband used to run.

Made by Ryota Nakano - a director who, with Capturing Dad, made one of the few unsentimental films about bereavement to play in this festival - Bathwater at least has a go at trying to avoid the clichés. On several occasions, when things threaten to get mushy, they're derailed by a gag or a surprise plot twist. It can't avoid sentimentality completely - and by the end, it's more or less succumbed to it - but at least it's trying. Although its final shots, which appear to interpret the title in an unexpected way, may be taking that approach just a little too far for comfort...

Six movies down: six to go. While you're waiting, why not try to catch some of these films in your local arthouse? People Still Call It Love is touring UK cinemas throughout February and March 2019: see the official website for full details. See you in Part Two.