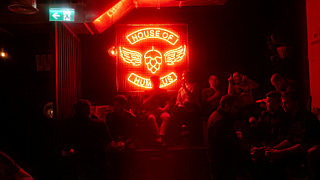 Specifically, BrewDog have got so big in those five years that the attitude of local webzine Brixton Buzz has changed from 'popular Scottish brewery BrewDog' in 2013 to 'yet another corporate megachain' in 2018. I'm sorry to say that even though I own shares in them, that's a joke that never gets old for me. Still, despite the backlash, BrewDog tried their best on the opening night - St Andrew's Day 2018, no less, and yes I know that was more than three months ago, I've been busy - to ingratiate themselves with the locals, through the simple method of having a member of staff outside offering free glasses of Caramel Carousel, a Scotch ale to celebrate the national day and the opening. I could suggest at this point that a policy of 'the first one's always free' has traditionally always gone down well on Coldharbour Lane, but that's probably just the North Londoner in me talking.

Inside, BrewDog Brixton is relatively small compared with the boozodromes that they opened a lot of in 2018. On a Friday night, with the added novelty of it being the opening night, it's reasonably packed. We manage to find a pair of free seats thanks to a bit of atrocious design: there's a ten seater bench up against one wall that has two spots free in the middle that we can only get into by barging past everyone else. (Half an hour later, everyone else on the table has gone: was it something we said?) Aside from that big table, Brixton seems to have taken most of its layout cues from Angel, with a combination of tables, booths and steps to give a variety of arse-parking experiences.

We're there for the evening, which means food as well as beer. Sadly, although the bars were promising a veggie haggis burger for St Andrew's Day, that memo didn't make it as far south as Brixton, meaning we have to go for our more traditional options of chicken and seitan burgers. Still, the beers are up to the usual standard: we follow up the burgers with an Overworks Cosmic Crush cherry sour and the Gypsy Hill/Dugges collaboration Percolator, which feels a bit like wrapping up a meal with dessert and coffee. Other beers consumed include the small-batch Fanzine offering Double Agent, which allows The Belated Birthday Girl to go off on her usual rant about the current glut of New England IPAs that taste of juice rather than hops ("IT'S A CHILDREN'S DRINK", she yells at anyone within earshot): and the perfect evening-ender of Dugges' We Are Beer Bristol, a cognac barrel-aged stout made out of cocoa, vanilla and Tonka toys, apparently.

As ever, we're looking out for things that will differentiate this bar from the others out there, and one thing Brixton appears to be experimenting with is a bit more gender-fluidity in the toilet department. They've gone for a unisex approach, sort of: no urinals, a 60-40 split between female and male cubicles, and a communal washing area. I personally wouldn't object to having all the cubicles be gender-neutral: The BBG has more of a concern about how "men piss on the floor all the time." (Look, I apologised, didn't I?) As if to laugh in the face of my North London prejudices, I can report that the free toiletries supplied in the loos were still there some nine hours after the doors opened: a particularly wry touch is that the female cubicles feature Elvis Juice cans filled with complementary tampons.

But there's an elephant in the room that needs to be addressed. When I last used the hashtag #craftbeersowhite in these pages, it was at the Gothenburg bar, and it was used ironically in praise of their soul-heavy playlist. I wouldn't have expected to be dragging it out again for the opening of a bar in Brixton, but the simple fact remains that on a busy Friday night there are precisely two black guys standing at the bar, and everyone else in the room conforms to the hashtag. The anti-gentrification grumblers at Brixton Buzz may well have a point. The music policy in the Brixton bar is interesting, bearing that in mind: it's more hip-hoppy than we generally come to expect from BrewDog, but you realise after a while that it's all instrumental, like cheap non-copyright library music from the soundtrack of an urban British thriller movie. (Compare and contrast with a recent Sunday lunchtime session we had at the Clapham Junction bar, where they tried to ring the changes with a rap playlist, only to have to hit the 'track skip' button thirty seconds into each song once they realised the effing and jeffing wouldn't go down well with the brunching families occupying several of the tables. After this happened about seven or eight times, there was a long pause followed by a song from Mumford and Sons.)

It felt a little unfair to judge the bar solely on its opening night - plus, yes, there was the whole issue of taking three months to write up my report of it - so we've paid a second visit to it more recently, grabbing a Sunday brunch there. Again, it's not really a typical timeslot: as with other bars like Seven Dials and Reading, it's an opportunity to watch the place gradually accelerate from virtually empty to pleasantly buzzing over the space of a couple of hours. The BBG would like to report that the seitan she had for brunch was the best-cooked she's had in a long time (the polar opposite of Tower Hill, where they accidentally set it all on fire). As far as the elephant goes, though, things are even less promising than they were before: the background music has been retuned back to Radio Whiteboy, and the hashtag applies to 100% of the punters.

I'm not pretending that I can offer any solutions, you understand: it's more of an observation than anything else, and I don't know if the mistrust of BrewDog's size and reputation has anything to do with the mismatch of demographics on either side of the front door. But it's a decent enough bar in its own right, and possibly needs to engage with the local community more if it wants to become even better. They could always start by pointing out that BrewDog pay their staff a living wage, which is more than some of their neighbours on Coldharbour Lane do.

You know, I still tell the story of the time we went to Belgo restaurant for Sausage and Mash (I think), and tried to find the gents (trembles) .

Although I'm not disputing what you say about the playlist the times we were there, we know it's not *always* like that:

(Though we weren't in the bar at the time - too busy going to see the man himself!)