Simian Substitute Site For April 2019: Why Can Monkey・Pheasant・Dog Beat The Demons?! 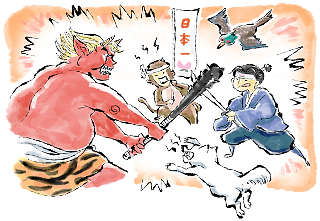 Books: So, a friend of mine has just published his first novel. Let's just pause for a second and quietly acknowledge what an awkward position that puts us both in, shall we? With that out of the way, let me introduce you to Tickle Me White by Michael Doust. It tells the parallel stories of an unlikely pair of people, a London bus driver and a professional dominatrix - I can only assume that the title Fifty Shades Of Grey-Green was already taken by someone else. It's one of those novels that's very keen to teach you stuff you don't know, whether it's the bus equivalent of four-dimensional chess that drivers play with each other to maximise their rest periods, or the exact construction of various pieces of bondage equipment. How much of this is down to research and how much to experience, I wouldn't dare to say: but some of the early part of the book gets a little too bogged down in those sorts of details for my liking. Then about halfway through the plot kicks in with a vengeance, and the book becomes the morality tale that Doust promises you on its cover. (Right this second, I'm really enjoying getting to call him by his surname in a review context.) It's obviously not flawless - like any self-published book (including my own), it needs a vicious copy edit by someone unconnected to the author - but the second half builds nicely into an enjoyably grim farce. I'd say it was like Tom Sharpe with fewer jokes, except I have to admit that the final punchline had me hooting. So, when's the next one?

Radio: Well, sort of radio, in the way that Netflix is sort of television. It's interesting to watch Audible travel down a similar business strategy to Netflix - starting off as a supplier of other people's work (in this case, audio books), but gradually moving into producing their own original content. Earlier this month, I attended a recording session for a pretty special bit of content: The Goodies: Live In Your Ear, a one-off reunion of Tim Brooke-Taylor, Graeme Garden and Bill Oddie for a new audio adventure, over three decades after they were last on telly. Obviously age has taken its toll on them, to the extent that Garden had to cry off at the last minute with a back injury (gamely replaced on the night by producer Barnaby Eaton-Jones, who we're assured will be revoiced by Graeme in post-production). Myself, I was a little concerned that the script was credited to Gareth Gwynne and John-Luke Roberts, with Garden and Oddie relegated to a 'with' credit. But I needn't have worried. The sound-only nature of the silliness makes it more reminiscent of an extended sketch from I'm Sorry I'll Read That Again than authentic Goodies, but there are worse things to sound like, and there are plenty of callbacks to their classic TV moments. Best of all, Oddie, Brooke-Taylor and their hard-working supporting cast are visibly - and, I hope, audibly - having huge amounts of infectious fun: there's never a sense of them going through the motions. There's talk of this becoming a regular series if it's a success, but I'd be happy enough for the Goodies to call it a day with this delightful hour in the can. Expect to hear it on Audible at some point in the near future, assuming you've got a subscription.

Telly: Well, sort of telly, and so on. If there's one Netflix series that everyone's banging on about at the moment, it's Russian Doll, and with good reason. It's the story of Nadia (Natasha Lyonne), a woman whose 36th birthday takes a spectacular turn for the worse. It then keeps on taking a turn for the worse, though not in any way you might expect. The obvious comparison point is, of course, obvious, but there's a lot more going on here than a simple homage: the show burns through scenarios, theories and pitch-black gags at a rate of knots, barely giving you time to consider one possibility before it rushes on to the next. It's a show that's driven by its narrative surprises, so the colder you go into it, the more fun you'll have - the trailer on the page I've linked to blows at least one of the best of those surprises, so proceed with caution. Best of all, Russian Doll is one of the few Netflix shows that considers brevity to be a virtue: eight episodes, none of them longer than thirty minutes, culminating in an actual ending rather than an extended tease for a theoretical season two. Everyone involved is at the top of their game, but co-creator/co-writer/co-director/star Natasha Lyonne is sensational: whoever it was on Twitter who suggested she could be the lead in a Columbo reboot definitely has something there.

In the meantime, your Simian Substitute Site for April 2019 rejoices in the full-length title A little of knowledge about Momotaro: Why can monkey・pheasant・dog beat the demons?! It's an article from the site Manga de Japan, which covers lots of aspects of Japanese culture in a delightfully readable illustrated form. Here, they're talking about the Okayama folk legend of Momotaro, a magical boy who came out of a giant peach and had a monkey, a pheasant and a dog as his companions in devil-fighting. The English is a little wobbly in parts (I must admit I lost it at "Momotaro penetrated and beat the demons"), but the explanation as to why he chose those particular three animals is interesting.

This month, expect a few more BrewDogging posts, as I finally get to catch up with some of the 2019 bar openings. And after that... well, we may be coming back to Momotaro, one way or another. We'll see. Anyway, as usual there's space for your comments below, directly after one of these things -